The Camera Tab  provides control over camera perspective and depth of field. The tab becomes available only when the scene container has been selected in the timeline.  Parameters in the camera tab allow you to animate the camera motion for your effect. Here we will break down each of the parameters native to this tab.

The Display Camera Interactor checkbox allows you to see a wireframe placeholder of a camera that would be visible in another camera view.  This can be helpful in allowing you position the camera in non-render views, such as the World View.

Working with the Position Camera Model

The Position Model allows you to adjust camera perspective by adjusting the X,Y, and Z position of the camera’s focal point, or the area of the image where the camera is pointing. A good analogy would be to imagine that you are moving the camera left, right, up or down in relation to your object, while always keeping the camera locked on a specific target.

Camera X, Camera Y, and Camera Z set the position of the focal point of the camera along the X, Y, and Z axis.

Increasing the Zoom alters the field of view, exaggerating the perspective on portions of the object that are closest to the camera. This functions identically to a tradictional camera zoom.

Orientation allows you to determine the focal point of the camera and lock it in place, so that no matter where along the X, Y or Z axis you move the camera, it will always focus on a specific point. There are three options which determine how the camera focuses on a specific object:

The Camera is located directly in front of the two objects 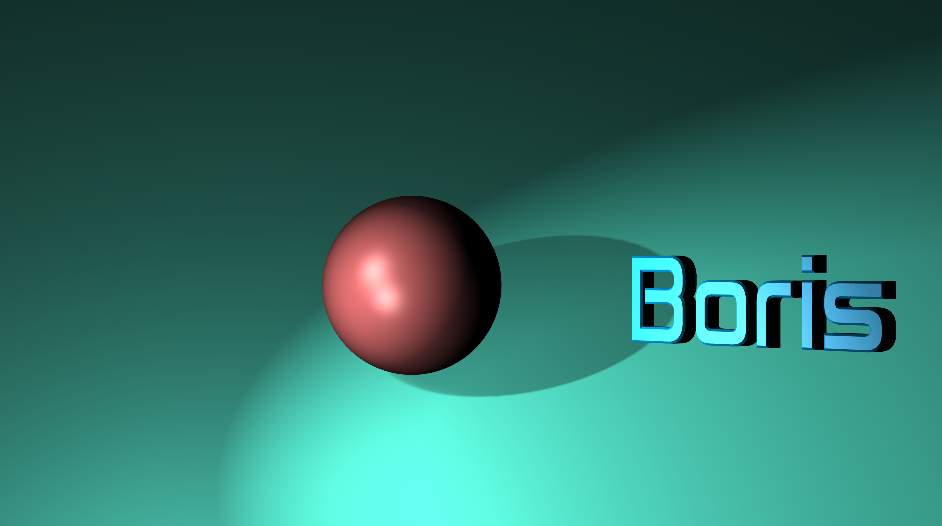 While in Free Rotation mode, the camera’s X position has been updated. Note how the perspective remains the same, but the camera is now looking at a different part of the scene. 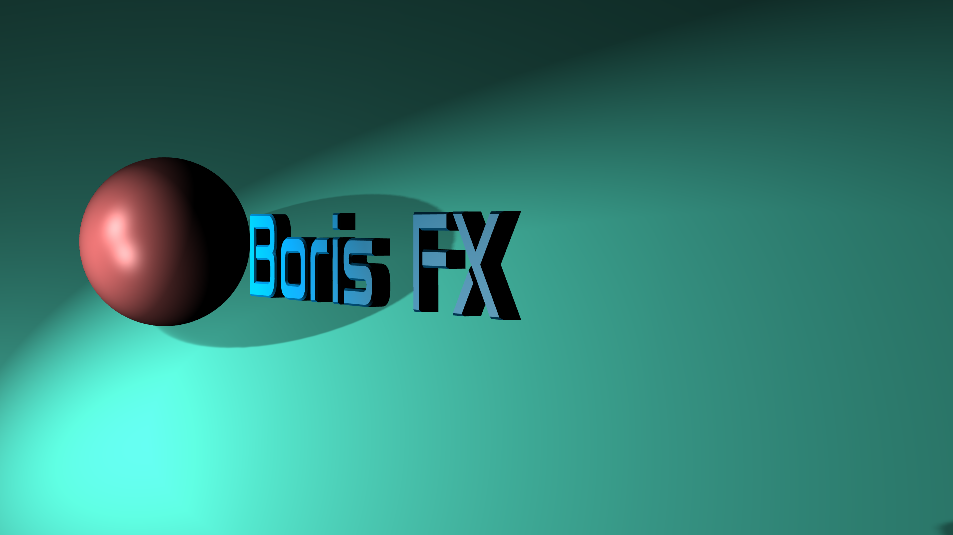 In Point to Target Mode, observe how the camera remains focused on a specific point. As it’s Position X is moved, the relative perspective of the objects change. 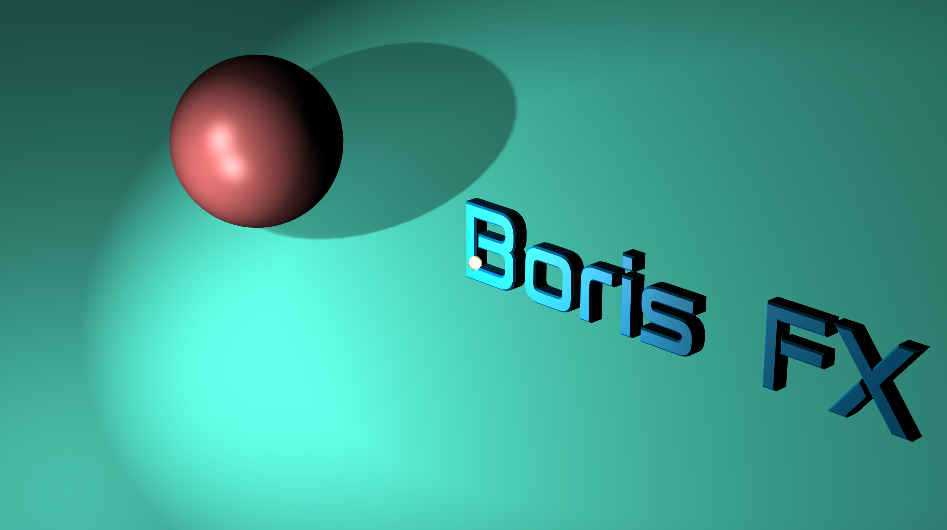 In Point to Object Mode, the Boris FX Text has been selected. The camera will focus on this text, and as it moves along the X,Y, Z plane, the perspective will shift around this object.

Working with the Orbit Camera Model

The Orbit Model allows you to rotate the camera around the scene by adjusting the Tumble, Spin and Rotation. This differs from the Position Model in that the camera is always pointed towards the scene itself. A good analogy would be to imagine that your camera is on a circular dolly track orbiting your scene. 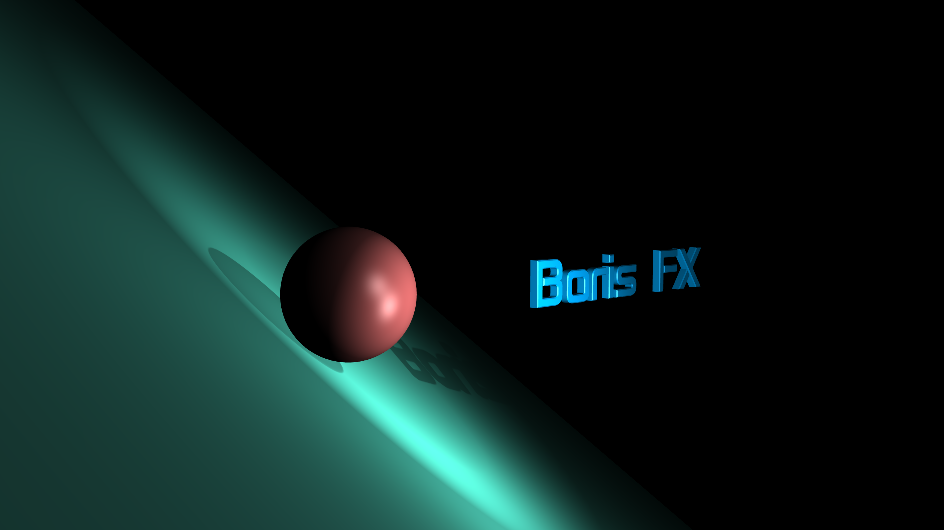 This is different from the Zoom parameter, which doesn’t alter the position of the camera, rather it alters the field of view exaggerating the perspective of the objects. Although they seem similar they can be used independently to create unique effects. By increasing the camera distance while also increasing the zoom, you are in essence dollying back the camera, while zooming in on the scene. This is a traditional method of creating a dolly zoom which causes a continuous perspective distortion  that gives the apperance that the foreground is growing in size while the background is shrinking. It can create a highly unsettling effect or a strong emotional impact. This style of shot was most famiously used in Alfred Hitchock’s Vertigo, and Steven Spielberg’s JAWS.

As with the Position Model, Tumble, Spin, and Rotaterotate the focal point around the X, Y, and Z axes respectively. They may also be animated for values greater than 360° to allow for more than one full revolution.

Working with the Pan Camera Model

The Zoom parameter doesn’t alter the position of the camera, rather it alters the field of view exaggerating the perspective of the objects.

Working with the Depth of Field Parameters

Depth of Field simulates the focus of objects in relation to the distance from the camera. Objects that are further away or close to the camera may appear less sharp or completely out of focus. Depth of field helps to create realism in effects that are computer generated rather than filmed on an actual camera. You can enable Depth of Field from the drop down menu. Once enabled, additional parameters will be available.

Focal Length is the distance between your lens and the object that is in focus. The higher the value the further from the lens the objects in focus can be. Lower values will bring objects closer to the lens into greater focus while leaving more distant objects out of focus. Together with Aperture, Focal Length helps to determine the depth of field for your scene.

Blur Strength controls the amount of blur present in the out of focus areas. The higher the value the blurier the object will appear.

Sample # multiplies the instances of depth of field. Basically for each Sample value, the effect is multiplied by that amount. Higher values will increase the overall amount of blur, while lower values will decrease it.

Bias, Gain and Threshold control the amount of light reflecting in the scene. Increases to these values will increase the brightness of your scene around the out of focus areas.

Fringe creates chomatic aberations along the edges of objects as they lose focus. As light enters a lens that is not properly focused, different wavelengths reflect different colors onto the camera sensors. By increasing this value, you can create more noticible color fringing.

Pentagon Shape allows you to enable bokeh around out of focus points of light. This causes bright light sources that are out of focus to take on a pentagon shape. By adjusting the feather parameter you can add more or less detail to these points.