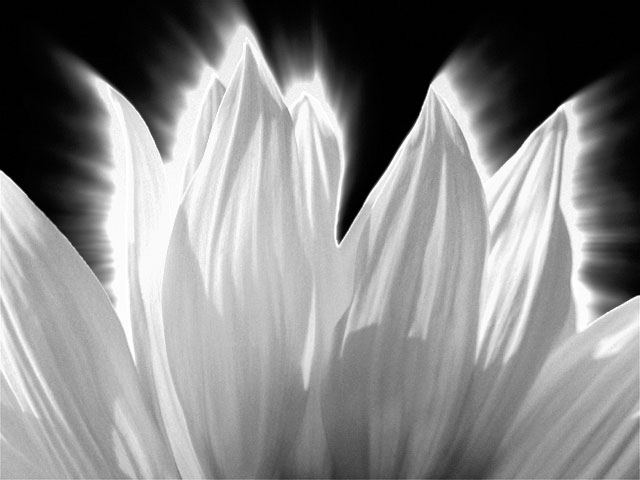 Light Matte uses applied light to create or modify an alpha channel. Rays of light spread from the light source point in all directions. As the rays expand, their intensities are affected by the luminosities of the pixels that they cross. The farther from the source the rays extend, the less they are affected by the intensities of new pixels that they crosses. This process is referred to as attenuation, since the affect of the pixels on the intensity of the rays attenuates, or lessens, over time.

Light Source sets the location of the simulated light source on the X and Y axis, respectively.

Intensity adjusts the intensity of the light source.

The Attenuation Type menu chooses the mathematical process used to determine how the influence of pixels affecting the intensity of the rays of light changes over time. The choices are Exp Dist SQ, Exp Distance, Expon Dist Sqrt, Dist SQ, Distance, and Dist Sqrt. Experiment with the various modes to see which works best with your effect.

These illustrations show the affect of various Attenuation Types on the matte created by the filter.

Minimum Influence sets the minimum amount of influence the pixels have on the length of the rays in the effect. Increasing this value is similar to decreasing the Ray Length value.

These controls further adjust how the attenuation affects the image and provide several additional controls for finetuning the effect.

Directional****Tuning smooths the angular behavior of the light. For most purposes, you should leave this control at the default value.

Source Threshold subtracts the threshold from each pixel value when computing the light.

Light Threshold sets a value that is subtracted from the light at each pixel before it is applied. If you are animating the position of an object, increasing Light Threshold will fade the light more rapidly as you move away from the source image.

The Light From Channel menu determines which source color channel is used to create the light and to calculate the intensities of the source pixels. Pixels with higher values in the selected channel are considered to have higher intensities.

Thickness/Intensity adjusts the width of the edges when Alpha Edges, Luma Edges, Alpha Cartoon Edge or Luma Cartoon Edges is selected in the Light From Channel menu. If another Light from Channel selection is made, this parameter does not apply.

Edge Pre Blur blurs the source image before the filter searches for edges. This blur does not appear in the output; it is used only in edge detection.

Edge Post Blur blurs the edges before they are used to create the applied light.

Cartoon Threshold sets the value in the threshold above which pixels are considered fully on. This parameter is only available when Luma Cartoon Edges or Alpha Cartoon Edges is selected in the Light From Channel menu.

These controls add noise which can be used to randomly vary several aspects of the effect.

The NoiseAffectsmenu determines which aspect of the effect is affected by the noise.

Noise Density sets the percentage of pixels that are affected by the noise.

Noise Intensity adjusts the intensity of the noise. Negative values cause the noise to have the opposite affect on the selected Noise Target as positive values.

Seed determines which value is input to the random number generator used by the filter to create noise. Adjust this value when you like the overall effect but want to adjust the random configuration of the noise pattern.

The Radial Matte controls allow you to selectively filter the image using a radial matte. The shape of this matte is affected by the Aspect parameter.

You can achieve a transition from transparent to opaque by animating Offset Radius from a negative value to a positive value. The values needed for a full transition depend on the other filter settings. Control this parameter to create a transition regardless of the other settings in the filter.

The image starts to become more opaque when it is closer to the light center than the inside radius, and becomes more transparent when it is further away from the light than the outside radius.

Inside Blend and Outside Blend soften the inner and outer edge of the filtered region, respectively. Higher values produce a softer edge.

The following illustrations show adjustments to the Inside and Outside Radius values.

Gamma controls the value of the middle tones while leaving the white and black of the image unaltered. Gamma controls a gamma adjustment that is made to the derived alpha. Increasing Gamma spreads the alpha so that the matte is more opaque.