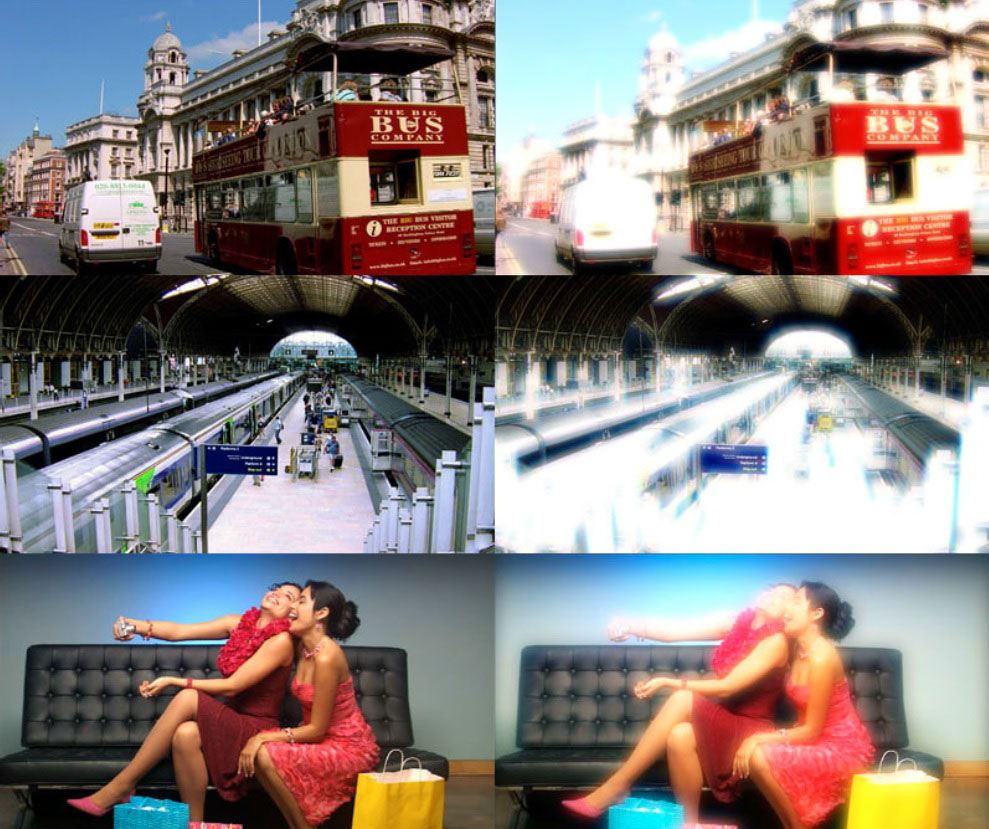 The BCC Film Glow filter generates a traditional film glow look, where the frame is subjected to a strong light source causing the image to bloom.  A common use of the glow filter is to make the whites in an image appear to glow and the filter will do this at its default settings.  To generate that flash to white glow, you need only animate the Glow Intensity parameter from 0 to the maximum desired value.  The Glow Threshold control is very useful in adjusting which regions or the image will contribute to the glow based on the brightness ranges found in a particular source clip.  Setting the Threshold Color value to anything other than white will prevent pixels of the same color value from contributing to the glow.  Toggling between box and triangle blur types allows for interesting stylized variations on the glow look.

For more information on the Compare Mode, Click Here.

Avoid Clipping: (Available on in After Effects and Premiere.)  This feature enables the glow to expand beyond the edges of the filtered image, thereby generating an even glow out past the edges of the image.  Disabling the feature clips the glow with a soft falloff toward the edge of the filtered image.  Note that when Avoid Clipping is enabled, the Pixel Chooser is not available.

View: This four way pop-up is useful when setting up the filter:

Glow Intensity: Use to control the intensity of the glow result. Higher values yield a stronger glow with a total white image when this parameter is set to it’s highest value.

Glow Color: Used to set the color of the glow. Default is white.

Glow Radius: Use to set the radius over which the glow spreads to surrounding regions.

X Width: Independent control for the width of the glow.

Y Width: Independent control for the height of the glow.

Glow Desaturation: This function alters the glow result by adjusting the chroma values that are used for the input. At 0 the function has no effect on the result generating a traditional film glow, increasing the value in this parameter yields a result that looks colder and less saturated.

Glow Threshold: Used to set the pixel values that are affected by the glow – a setting of 0 will apply a glow to all of the pixels in the input clip, while a setting of 100 will not apply any glow to the image

Matte Layer: If a matte layer is selected, the alpha premultiplied RGB values of this layer are used as a matte, applied to the RGB Glow (before the blur) independently for each channel E.g. if a pixel in the matte layer is pure blue, the corresponding source pixel will only contribute to the blue channel before the glow is applied.

Blur Type pop-­up: This two way pop-­‐up offers the option of using a Box or a Triangle blur for the glow effect.

Triangle Blur Iterations: Use to set the number of times the triangle blur is applied to the glow. Higher values will generate a smoother glow but will increase render times.

RGB Independent Glows: This checkbox enables independent scaling of the glow dimensions for R, G, and B.

Glow Boost Alpha: Controls how much the spread of glow pixels caused by the blur boosts the alpha channel of non-­‐opaque pixels.

Glow Under Source: Allows you to animate between compositing the glow over the source (default setting), under the source (setting of 0) or anything in-­‐between.

Source Opacity: The opacity of the source image that is composited with the glow. At a setting of zero only the glow is rendered.

Apply Mode: This pop-­‐up is used to set the apply mode that the filter uses to composite the glow over the input image. The default apply mode is “Screen” and there are 27 different apply modes to select from.

Apply Mix: Use to blend between a normal apply mode and the user selected apply mode.

Mix with Original: Used to blend the filter effect back with the unfiltered input image.

Note that when Avoid Clipping is enabled the Pixel Chooser is unavailable in Film Glow.