BCC Pin Art 3D is a particle based generator style filter. The name Pin Art is a reference to the desk toy where metal (or plastic) pins can be displaced by objects creating a 3D relief. The filter can use the color, luma, and alpha values of layers in the After Effects composition to define the appearance and arrangement of the particles making up the “Pin Screen”. Like a 3D-capable LED or halftone type of effect, it can be used to achieve a wide range of both 2D and 3D-looking surfaces. Pin Art 3D supports AE lights and camera for simple integration into AE 3D compositions. Features such as sophisticated built-in wipes and an integrated Beat Reactor group allow for creating dynamic animations within the filter, including animations directly influenced by audio layers.

Note about presets: Most Pin Art 3D effects are dependent on an alternate layer being set as the Pin FX Layer in order to appear as designed. Since layer selector popups are not saved as part of presets it is necessary to select the Pin FX Layer BEFORE loading a preset. Once the Pin FX Layer is selected it will persist when loading any additional presets for that effect instance.

Includes parameters affecting the image quality of the effect and other global render related settings.

Anti-Aliasing: None, Low, High ; sets the level of anti-aliasing applied to smooth edges.

Opacity Boost: controls the opacity of the particles.

Use Source Mask: When enabled, the Pin Screen will take any masking applied to the filter layer into account in it’s use of the layer, otherwise it will ignore masks.

DOF Falloff , DOF Resolution: when using Depth of Field (Built-in or Comp camera) these affect the appearance and quality.

Use Comp Lights: When enabled, the filter will use AE lights enabled in the comp. The maximum number of total lights (including built-in and AE lights) the filter can use at once is 8. If there are more than 8 enabled AE lights in the comp it will use the 8 enabled light tracks that are topmost in the timeline.

Use Built-in Lights: There are also 3 built-in lights available. It’s possible to use both built-in and AE lights simultaneously. If enabled, the built-in lights will have priority over AE lights in terms of which lights get used if the total number of lights exceeds 8.

Luma Inverse, or Alpha Inverse: is used to map how the FX are applied.

Master FX Scaler: allows for scaling all FX values in a single parameter. 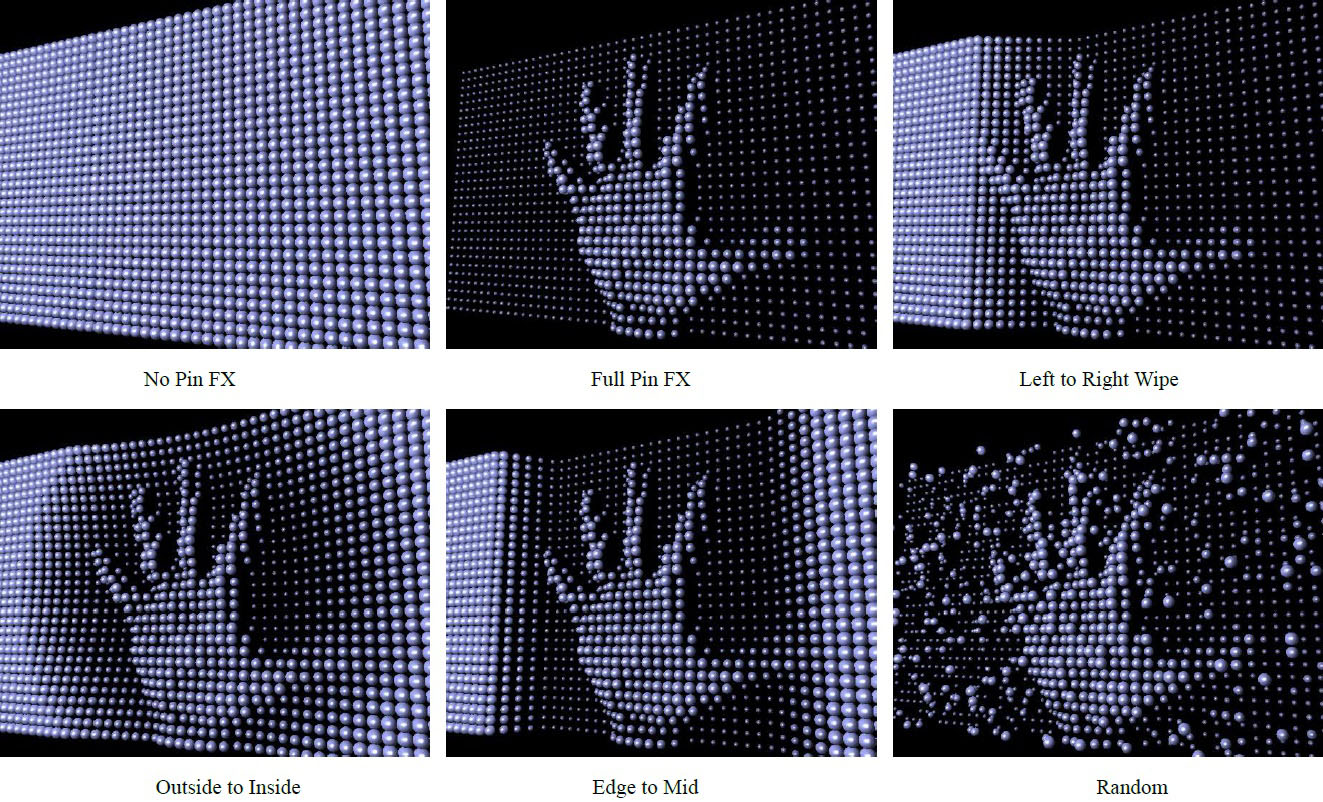 Texture Layer and Texture Modes: allow for using the image (Color and Alpha or Alpha Only) from an alternate layer as the texture displayed by each pin.

Mix Color Amount, Mix to Single Color, Mix to Layer: the pins default to using the color from the layer they are applied to, and the mix parameters allow for using another color or another layer to define the pin colors.

Shape Character: this parameter makes the 3D Discs to appear with hollow centers and it can change the 3D Cylinders into Cone shapes.

Material Shininess and Material Specular: for 3D snd Custom Shape pin types, these parameters allow for adjusting the appearance of 3D lighting on the surface of the pins.

Density Master, Density X, and Density Y: for adjusting the density of pins while maintaining the scale of the pin screen.

Global Scale: scale the pin screen including scale of the pins.

Twist Wipe: wipe controls that apply to the twist deformation.

Variance parameters: allows for varying the rotation amount between pins based on a random algorithm.

Bi-directional Rotation: allow for varied rotation in both directions simultaneously (positive and negative).

Transform Wipe: wipe controls that apply to the pin transformations.

Amplitude: for adjusting the height of the waves (can use positive and negative values).

Frequency: for adjusting the frequency of the waves.

Evolve: a control for the evolution of the noise pattern the waves are based on – can be keyframed to manually animate waves.

Auto-Loop: number of seconds at which wave animation will seemlessly loop.

Scale Waves: scales the amplitude of the waves.

Waves Wipe: wipe controls that apply to the wave deformations.

Disperse Master, Disperse X, Y, and Z: disperses the pins from their original locations based on a random algorithm – a master control and control for dispersion along the individual 3D axes.

Disperse Wipe: wipe controls that apply to the dispersion.

Field of View: an adjustment that can be used to simulate the look of various lenses – a large value gives a wide angle look.

Camera Tumble, Spin, and Rotate: controls for orientation of the position based camera.

Enable: 3 built in lights which can be individually enabled/disabled.

Ambient: increasing this value gives some of the light color to the dark (unlit) areas.

Type: determines whether the light will appear as a spot light or point light.

Light Intensity: intensity of the light.

Color: the color of the light.

Tumble and Spin: determines the orientation of the light if it is a spotlight.

Spot Angle and Feather: for spotlight, these determine the angle of the light cone and the softness of spot edges.

Random Seed: There are several features in the plugin that use some kind of randomization to generate results (Fractal Field, Speed Randomness, Size Randomness, Opacity Randomness, etc.). Changing the Random Seed tweaks the random algorithms to produce a somewhat different result. It can be used to simply try a few different takes on an effect and it can also be used when you want another instance of the effect to look the same but not identical – give it a different Random Seed value.

Near and Far Clip Plane Adjust: These can be used to clip or extend the bounds of the area in which particles will appear.

Alpha Cutoff: Determines what alpha value is equivalent to zero for the particle renderer.

Accessing Image Layers: Determines whether (and how) an animated Image Layer used as a particle will loop when the end is reached.