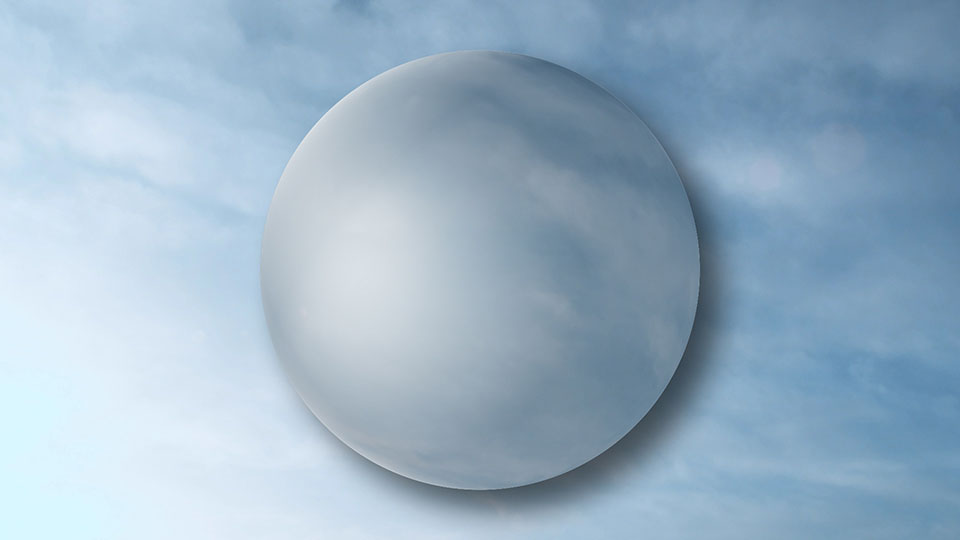 The Sphere shape maps the source image onto a 3D modeled sphere. A number of controls allow you to adjust the position, scale, size, and pivot point of the shape, crop and mask the sphere, adjust the camera perspective of the sphere, apply motion blur and lights, and control the compositing of the sphere with other objects.

The Source menu allows you to choose any clip layer in the timeline to map to the surface of the sphere. If you choose None, the filtered clip is used.

The Wrap menu determines how the source image wraps around the sphere.

The Faces menu determines which faces of the sphere are visible and allows you to map a separate image to the inside of the sphere.

Position sets the X and Y coordinates of the center point of the sphere.

Wrap Percentage controls the extent to which the image wraps around the shape. As Wrap Percentage approaches 0, the shape is less spherical and closer to the original flat image.

A Wrap Percentage of 100 wraps the image completely around the sphere. As you reduce the value, four things happen to the physical model: the radius gets larger, the image is mapped on a smaller section of the 3D shape, the viewer’s eye moves further away, and the aspect ratio is adjusted toward the original aspect ratio of the source. The overall effect is a gradual flattening of the image as the sphere unwraps.

Scale adjusts the size of the sphere.

The Crop controls crop the edges of the image. The Crop Top-Left and Crop Bot-Right set the upper left and lower right corners of a rectangle that define the borders of the crop.

The Motion Blur menu determines how many times the effect samples between the time the “shutter” opens and the time it closes. Increasing the number of samples creates a smoother blur but increases render and preview time proportionately. Choose Rough, Medium, Smooth, or Smoothest. Rough uses the fewest samples, while Smoothest uses the most.

**Camera/Pivot Parameter Group:**When the Lock Pivot checkbox is selected, the image tumbles, spins, and rotates around its own center. If this option is deselected, you can set an external pivot point around which to tumble, spin, or rotate.

Pivot XY and Pivot Z set the X, Y, and Z coordinates of the pivot point. If the Lock Pivot checkbox is selected, moving the pivot point has no affect.

Camera XY sets the horizontal and vertical position of the focal point of the camera (the point on the image plane at which the camera is pointed).

Camera Z sets the model camera’s distance from the image. Decreasing this setting places the camera closer to the image, exaggerating the perspective on portions of the image that are closest to the camera

The parameters in these sections allow you to apply up to three different lights to the effect. Each section contains parameters which control the corresponding light source. These parameters function identically for each source.

Each of the three light types is controlled by a slightly different group of parameters. The following chart indicates which parameters are used by each light type.

Source XY Spotlight sets the location of the light source on the horizontal and vertical axis.

Target XY Spotlight sets the X and Y coordinates for the point at which the light is aimed.

Width controls the width of the light beam.

Intensity controls the intensity of the light source. Increasing this value creates a brighter light.

The following illustrations demonstrate the effect of adjusting Intensity and Specular.

Color controls the color of the Light source.

Sweep Angle sets the angle between the beam of light and the horizontal axis.

If you select the Point at Source checkbox, the Target point coordinates are set relative to the undistorted source, so that the light follows the source as it animates.

The Apply Mode menu controls how the light is composited with the source image.  For descriptions of all the possible Apply Modes, Click Here.

The Drop Shadow On checkbox turns the shadow on and off. If this checkbox is not selected, the other parameters have no affect.

Shadow Distance sets the distance (in pixels) between the shadow and the image.

Shadow Softness controls the softness of the edges of the shadows. A setting of 0 produces a sharply defined shadow with hard edges. Increasing Softness produces softer edges.

Shadow Angle sets the direction of the drop shadow. A setting of 0° places the shadow to the right of the image; a setting of 90° places it directly below the image.

Shadow Color sets the color of the shadow.