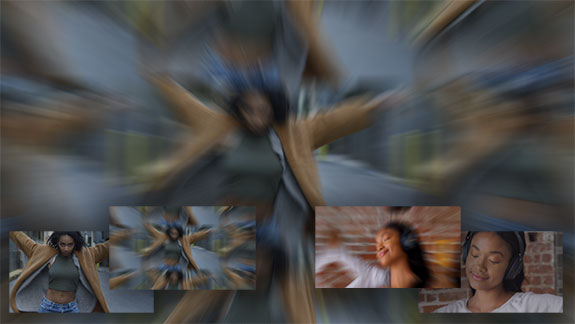 The BCC Crash Zoom Dissolve filter simulates a rapid zoom distortion in the source footage which automatically animates in intensity as your transition progresses to obscure the underlying dissolve between clips.

Zoom Delta: Sets the overall change in depth between the start and end points.

Reverse Zoom Direction: Inverts the motion of the transition animation.

Motion Blur Amount: Sets the amount of motion blur during the transition. Higher values will result in smoother motion blur.

Zoom Center: Set the XY position of the start point of the transition.

Zoom Smear Direction: Set the XY position of the direction of the smear effect.

Reverse Spin Spiral: Reverses the animation of the spiral effect.

Sample Count: Sets the amount of copies of the original used to create the effect. the upper limit of 100 generates a smooth result.

**Prism Amount:**Adjustst the amount of color displacement as defined by the color chips.

Color Chips: allows you to set the color of the indvidual color waves.

Saturation Peak: Sets the maximum saturation value for the transition.