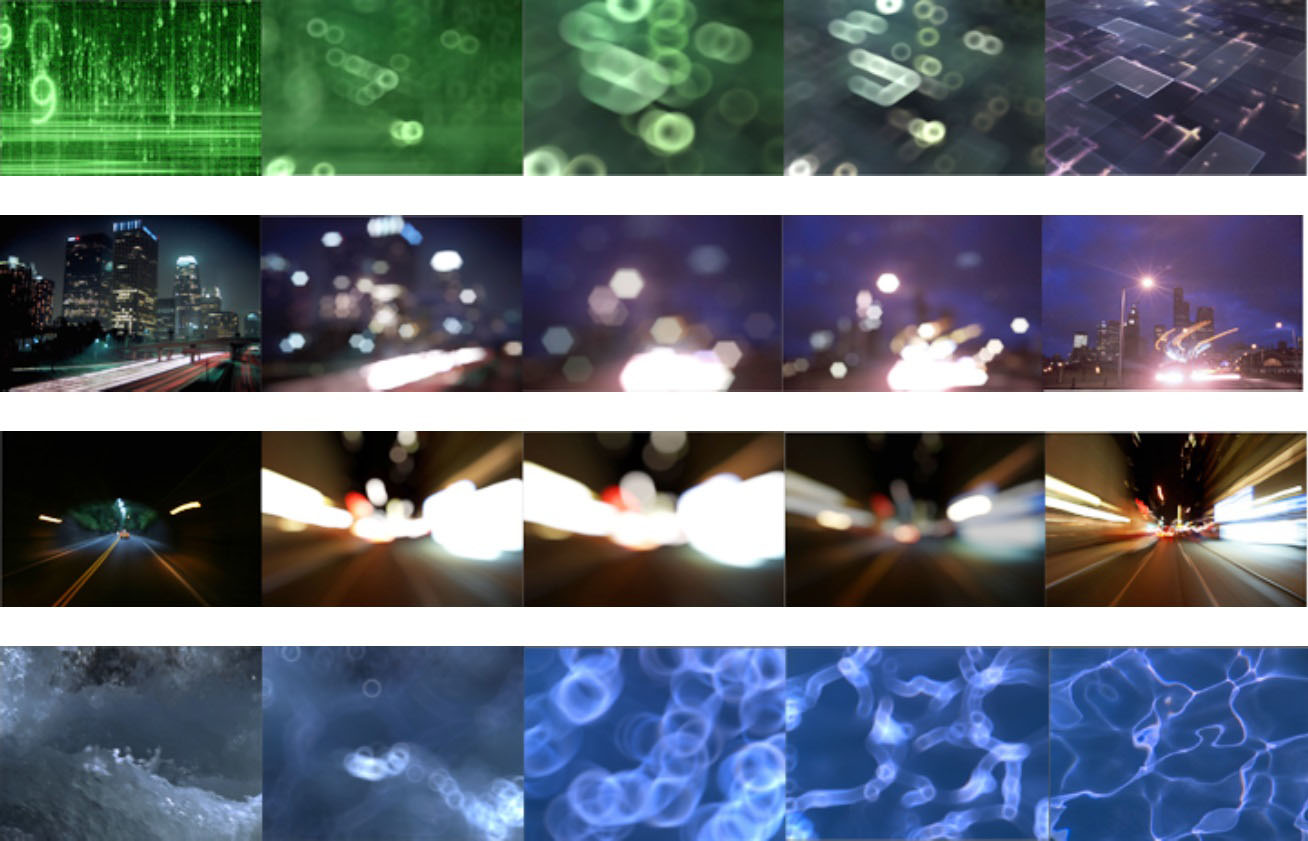 The BCC Lens Transition dissolve/wipe filter applies a lens blur defocus/rack-focus style effect to the specular highlights of the outgoing and incoming image clips (the highlights take on the shape of a simulated lens diaphragm.) This filter includes a pop-up that can be used to match the different looks that can be achieved in the physical world based on the lens aperture setting. This pleasing optical result is referred to in photographic terms as Bokeh.  Like all of the other filters that are included in the Transitions category, the Lens Transition filter includes user controls for the velocity of the transition with an optional on-screen display of the ease-in and ease-out velocity curve.

Zoom In: Incoming clip is zoomed in from zero to 100 percent

Zoom Out: Outgoing clip is zoomed out from 100 to zero percent

Pan: Outgoing clip is panned over to reveal incoming clip. The direction of the pan is set in Pan Direction pop-up

Linear Wipe: The outgoing clip is wiped to reveal the incoming clip. The direction of the wipe is set in Wipe Direction pop-up

Radial Wipe In: The incoming clip is wiped on from zero to 100 percent with a radial mask.

Radial Wipe Out: The outgoing clip is wiped off from zero to 100 percent with a radial mask

Pan Wipe Direction pop-up: Used to set the direction of the Pan or Wipe effect Left-Mask wipes from right to left.

Dissolve Apply Mode pop-up: Used to set the apply mode for the wipe. There are 27 different apply modes in this list.

Dissolve Apply Mix: Used to blend between the selected apply mode and the normal apply mode.

Incoming Layer pop-up: Used to select the incoming layer. The list displays all layers that are in the timeline of the current composition.

Apply Effect To pop-up: Used to select the layer(s) to which the Lens effect is applied.

Percent Done: Animate this parameter to set the state of the wipe.

Quality pop-up: 3 way pop-up is used to set the quality of the edges of the generated highlights.

Iris Scale: Used to set the size of the highlight blur effect.

Scale X: Scales the highlight along the X axis only.

Scale Y: Scales the highlight along the Y axis only.

Contains parameters to control the shape and look of the generated highlights.

V****iew Iris checkbox: When checked, displays the iris shape on a black background.

Iris Shape pop-up: Used to set the overall shape of the highlight.

Iris Rotation: Used to set the rotation of the iris

Contains parameters to control the highlights that are generated by the filter.

Boost/Sup Mode pop-up: Used to determine the way the highlights are composited into the image.

Boost Soften: A slope control that softens the highlight and shadow boosting effect.

Controls for color enhancements that auto-animate along with the transition – for example, boosting (or reducing) the Brightness or Contrast during the peak of the transition to maintain greater contrast, boost intensity, or create stylized variations of the basic dissolve.

These controls can be used to fine tune the way the blur interacts with the dissolve.

**Apply Blur To:**Determines how the blur is applied to the source and reveal layers.

A Iris Scale: Scale the blur amount  for just the Source Layer.

**B Iris Scale:**Scale the blur amount for just the Reveal Layer.

**Ease In:**Control how quickly or slowly the effect amount increases at the beginning of the transition.

View Ease Curve:  (Only visible/enabled in hosts that don’t support heads up display widgets for manipulating these controls directly on screen.)  Enable this control to display a preview graph of the the animation curves rendered into in the composite window.