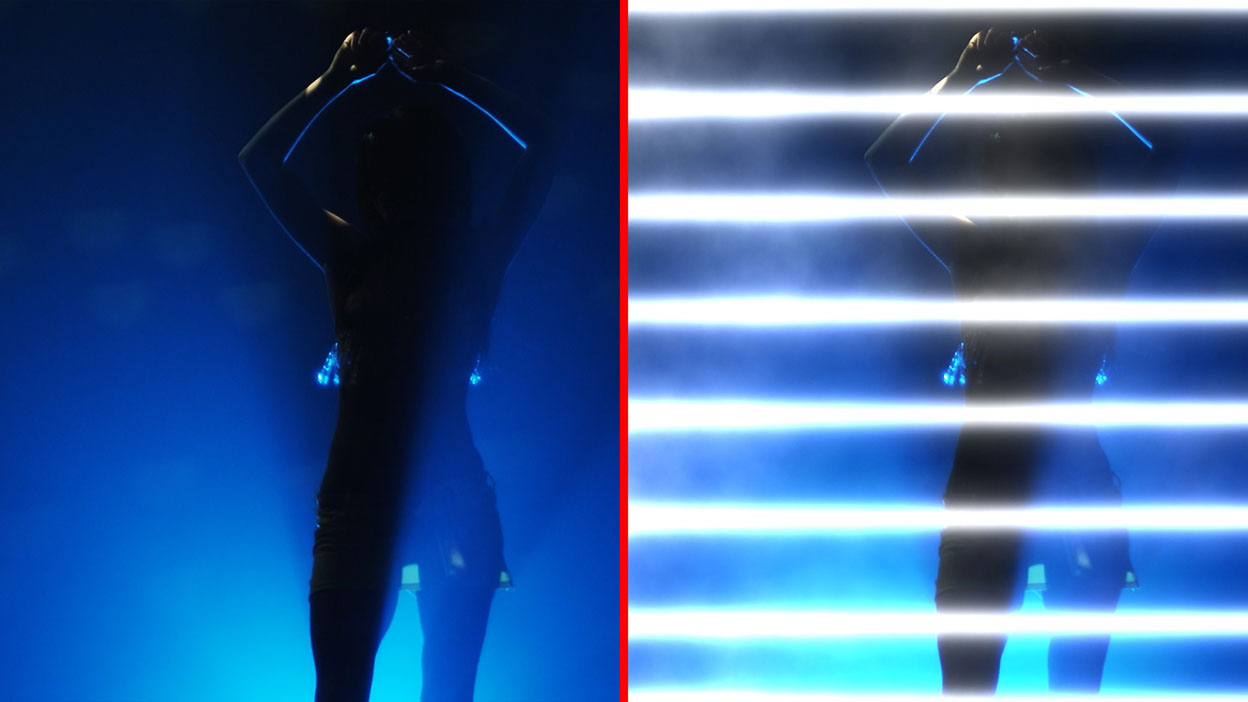 Add multiple strobing lights to a scene with built-in fog generator which can be used to create light sword effects or to simulate and array of light beams. This filter is hardware accelerated for enhanced performance.  BCC Laser Beam can be driven by either the filter’s own built-in 3D camera and lighting system or, when running in After Effects, by integration with the native host camera and lights.

By default the filter is set to generate built-in lights and uses the built-in camera.  To use it in a host without a camera or lighting system apply the filter to any clip and use the built-in filter camera and lighting controls to light and navigate around the scene in 3D space.

To use the After Effects light and camera system you can set the filter’s Camera and Light Source menus to Comp.  Unless there is an AE camera and light present in the comp no effect will be visible when you select this option, therefore, if you have not done so already, add a spot light or a point light and an active camera to the scene. The BCC Laser Beam filter will automatically detect the added light(s) and use it to create a volumetric light beam.

If you have more than one light in the scene, the filter will pick up these lights and apply the same level of volumetric light to each visible light. There are options in the filter to determine whether a light in the scene is used or ignored as well as options to control the lighting properties.

Auto-animating smoke can be added to augment the atmospheric intensity of the lighting.

The built-in load save mechanism is used to access the factory installed or user generated presets.

Camera Pop-Up:  [After Effects only] Menu to select which camera controls to use when running in After Effects.

Camera Model pop-up: Used to select the desired camera system. There are three available options to select from:

Zoom: Used to set the Camera zoom, which controls the view perspective. To achieve a wide angle effect, set a low Zoom value and use the Position Z parameter to move in closer to the composition.

Position XY: Used to control the position of the camera in 3D space along the XY axis.

Position Z: Used to control the position of the camera in 3D space along the Z

Tumble: Used to set the direction of the camera along the Y axis when in

Spin: Used to set the direction of the camera along the X axis when in Free camera mode.

Rotate: Used to set the direction of the camera along the Z axis when in Free camera mode.

Target XY: Used to set the XY position for the Target camera mode.

Target Z: Used to set the Z position for the Target camera mode.

Orbit Radius: Used to set the distance from the camera to the center of the lights.

Orbit Tumble: Used to move around the lights along the Y axis.

Orbit Spin: Used to move around the lights along the X axis.

Orbit Rotate: Used to move around the lights along the Z axis.

Pan Distance: Used to move horizontally across the scene along the X axis.

Pan Advance: Used to move in or out of the scene, along the Z axis.

Use to add smoke to the scene for more realistic lighting.

On: Smoke is added to the scene when this option is enabled.

**Seed:**Determines the value input to the random number used by the filter to change the particles of the smoke.

Density: Use to set the amount of smoke in the scene.

Speed: Use to control the speed by which the smoke evolves over time.

Motion Blur On:  Enable/Disable motion blur in the scene.

Motion Blur Control:  Choose between using the motion blur controls built into the filter or following the host’s native motion blur settings (when running in After Effects).

Shutter Angle:  Specify how widely spaced the motion blur samples are in time.

Shutter Phase:  Specify the time offset of the motion blur samples relative to the current frame time – trailing, centered, leading, or values in between.

Samples Per Frame:  Specify the number of distinct motion blur samples per frame.

Master Intensity:  Control the master intensity of all lights appearing in the scene.

Tip Sharpness:  Control the shape of the light beam tip (on the target end of the tip).

Light Source:  [After Effects only] Control Menu to select which lighting controls to use when running in After Effects.

[After Effects only] Parameters to control how the filter uses host native lights that are present in an After Effects scene.

Select Lights pop-­up: [After Effects only] Control which lights are affected by the filter

Name Starts With pop-­up: [After Effects only] Use to select lights according to the way they have been named in the After Effects composition.

Start Width:  [After Effects only] Width of the light at its “source” end.

End Width:  [After Effects only] Width of the light at its “target” end.

Color:  [After Effects only] Color of the light at its center or core.

Outside Glow Amount:  [After Effects only] Intensity of the glow around the outer edge of the light.

Length:  [After Effects only] Relative length of the light beam along it path.

[After Effects only] Control over the details of the automatic light strobing.

Light Strobe On:  [After Effects only] Enable/Disable automatic strobing.

Amount:  [After Effects only] Intensity of the strobing with a value of 100 allowing the light to flicker completely off.

Speed:  [After Effects only] Speed of the strobing pattern with higher speeds yielding faster rates of flickering.

Random:  [After Effects only] Controls how randomized the flicker pattern is over time with a value of 0 producing a steady sinusoidal flicker pattern.

Random Seed:  [After Effects only]  Generate a new random starting point for the flicker pattern, for example to allow multiple effect instances to generate different patterns of flickering.

Laser Beam allows up to 3 built-in light sources, each of which can be independently enabled/disabled with identical sets of lighting controls.

Color:  Color of the light at its center or core.

Intensity:  Peak intensity or brightness of the light.

Start Width:  Width of the light at its source end.

End Width:  Width of the light at its target end.

Outside Glow Amount:  Intensity of the glow around the outer edge of the light.

Length:  Intensity of the glow around the outer edge of the light.

Control over the details of the automatic light strobing.

Amount:  Intensity of the strobing with a value of 100 allowing the light to flicker completely off.

Use Target Layer:  Enable/Disable use of the target layer.

Target Layer Map:  Layer picker used to specify which layer serves as the target for the light  beam.

Additional Motion Tracking controls which offer access to a second tracker that can be tied to the coordinates of the light source target point.