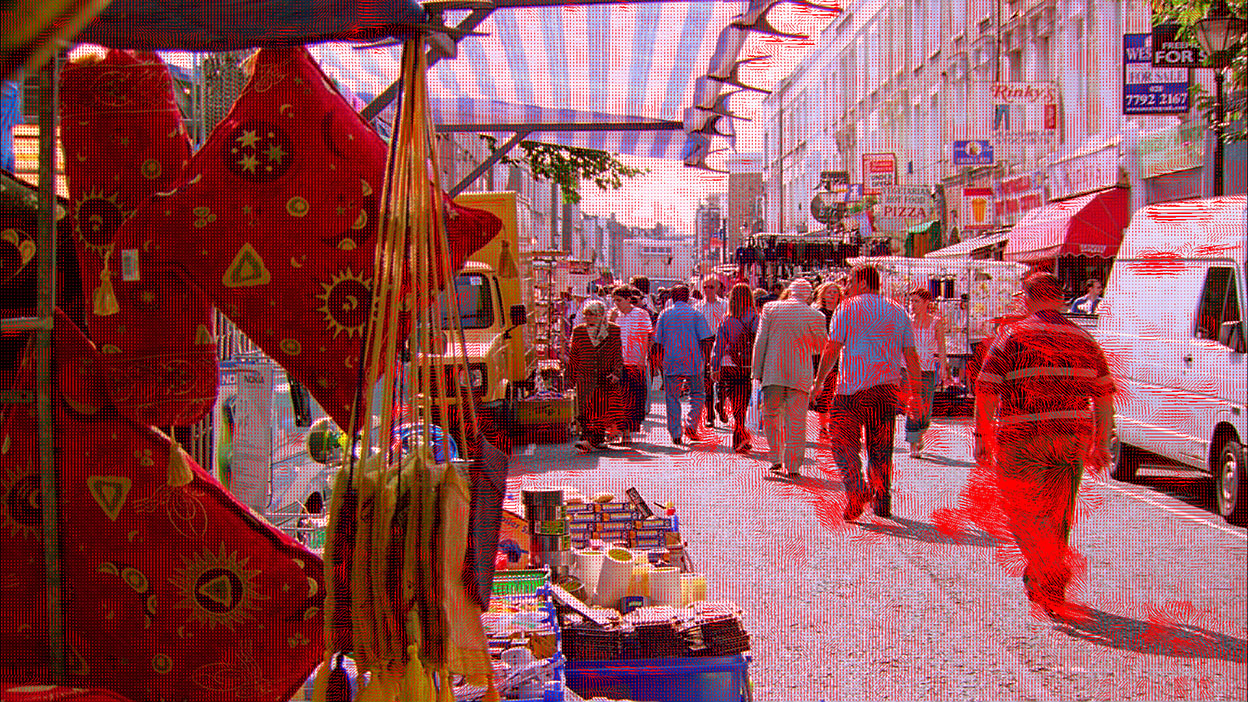 The BCC Optical Stabilizer filter enables you to quickly and easily stabilize shaky video footage, such as clips that were shot with a hand-held camera. The Optical Stabilizer uses optical flow technology to analyze every frame in the source clip to determine the movement of the camera and then adjusts the position, rotation and scale of the clip to compensate for the unwanted camera movement. Depending upon filter parameter settings the motion in the clip will either be smoothed or completely locked down. Unlike many image stabilization tools, the BCC Optical Stabilizer does not require you to set and keyframe user-defined tracking points, which is very useful for images where point tracking data is unreliable.

Because the very nature of post camera image stabilization causes the image to be cropped, this filter includes post image stabilization options to fill the blank areas around the of the frame, such as repeating pixels along the cropped edges, mirroring the image along those edges, filling them with solid color or leaving them transparent. An autoscale function is also included in the filter. The Auto Scale function, which is enabled by default, automatically transform scales the image so that it fills the frame across time. Also included in the filter are seven user-selectable transform scale algorithms, which ensure optimal post-transform image sharpness.

Changing the value in this parameter changes the reference frame around which the source clip is stabilized. Changing this value does not require re-analysis of the clip and depending on the amount of movement in the source, a value other than the default first frame can sometimes generate a more pleasing result. Available when in Stabilize mode only.

Changing the value in this parameter changes the number of frames over which the camera motion is smoothed. Experimentation is key as depending on the level of camera movement in the source clip, changing this value will result in a more or less smooth result. Available when in Smooth mode only.

A good target region contains a high-contrast object with good vertical and horizontal edge definition as well as large areas of non-uniform detail, especially edges in various directions. Ideally, you should find a pattern that is visible in every frame. The area you define should contain an object that should be stationary in every frame.

For example, you want to stabilize some footage shot off the railing of a moving boat. The pier is visible from the boat. A high contrast mooring on the pier would make a good target.

This group contains controls to handle the edges around the stabilize image.

Clip Top: Crops the image along the top horizontal edge.

Clip Left: Crops the image along the left vertical edge.

Clip Bottom: Crops the image along the bottom horizontal edge.

Clip Right: Crop the image along the right vertical edge.

Edge Color Chip: Use to set the color of the pixels for the color fill

Auto Scale: When enabled, automatically transform scales the image to fill the frame.

X Translation: Use to manually reposition the image along the horizontal axis

Y Translation: Use to manually reposition the image along the horizontal axis

Rotation: Use to manually rotate the image along the Z axis

Scaling: Use to manually transform scale the image

Transform Center Offset: Use to set the x/y pivot point around which manual rotation and scaling are centered.

This group contains parameters that can be manipulated to alter Optical Flow analysis.

Vector View Spacing – Use to adjust the number of on-screen vector lines.

Vector View Scale – Use to increase the scale of the on-screen vector lines.

Stabilization Samples – Use to set the number of pixel samples that the optical flow algorithm uses for image analysis. Higher values pay produce a more accurate result but will increase render times.

Span – Sets the percentage of samples that are considered to be representative of the background. If the image is nearly all background, increasing the value in this parameter can increase the accuracy of the stabilization.

Edge Contrast – Sets a threshold for the minimum amount of detail in a region.  Regions containing less detail than the threshold are treated as having no detail.  If the images includes a lot of motion in areas that are very detailed, or small objects, decrease the value in this parameter.  Min Edge Contrast does no depend on motion, only texture and detail.

Resolution Pop–up: Used to set the quality of image analysis.  Higher values will result in longer image analysis items but, depending on the clip, may yield a higher quality result.

Velocity Limit – Constrains the magnitude of motion estimation.  This value corresponds to a percentage of the size and resolution of the Source Later.  For example, when working with a D1 image, the value of 100 corresponds to approximately 100 pixels.