BCC Radial Wipe produces a radial wipe transition, and contains many controls for unlimited creativity, including Influence controls and preset edge patterns. At the default value, this wipe is similar to a Circle wipe.

The Animation menu controls whether the filter auto-animates or is animated manually. Choose from the following options.

When the Invert Wipe Checkbox is selected, the alpha channel created by the wipe inverts.

The Center position controls set the center point of the wipe on the X and Y axis, respectively.

Radius controls the radius of the wipe (a value of 100 is scaled to the image width) when Manual is chosen from the Animation menu. When Auto or Percent Done are chosen in the Animation menu, this parameter has no affect.

The Scale Others to Radius checkbox is only active when the Animation menu is set to Manual. If this checkbox is selected, most controls in the remaining parameter groups scale to the Radius setting. For example, Border Thickness decreases as the Radius scales to 0.

Softness controls the softness of the wipe.

The parameters in this group contain three controls that stretch the shape of the wipe into an ellipse.

The following example shows a wipe with Influence applied to the incoming (fish) media. and Stretch set to 155.

Rotation Rate auto-animates the Stretch Angle value, causing Stretch to rotate. The units are measured in degrees per second.

The Output menu controls the output of the wipe. You can also use this menu to preview the matte, or preview the source channel used by the filter to create the effect. Not all of its options are relevant in all situations. Choose from the following options. The following examples show the BCC Radial Wipe. 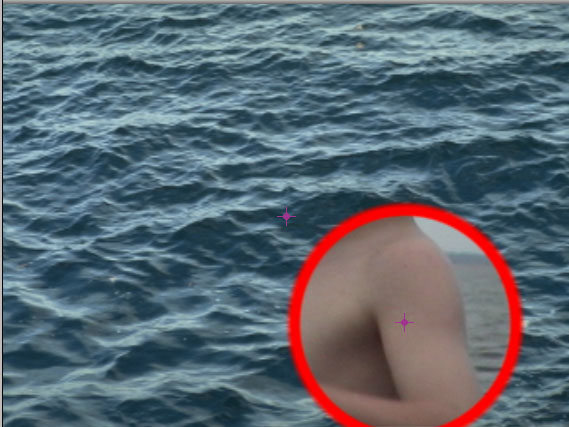 Working with the Border Parameter Group

Master Thickness scales the thickness of all borders.

Master Opacity sets the opacity for all the borders, expressed as a percentage.

Master Offset offsets the position of all borders relative to the wipe progress.

Each Transition Wipe effect can include up to three independent borders. The Additional Borders parameter group contains controls for two additional borders. To create only two borders, you can use only the controls in this group. To make three borders, create the first border using the parameters in the Border Parameter Group and use this group for the additional and master border controls. Borders are composited in order; if all three borders are used, Border 3 is composited over Border 2, which is composited over Border 1.

The Border On checkbox enables the first border. If this checkbox is disabled, no border is created and the remaining parameters have no affect.

Border 1 Thickness sets the thickness of the first border, in pixels.

Border 1 Opacity controls the opacity of the border, expressed as a percentage.

The Border 1 Color controls set the color of the border.

The Border 1 Layer menu generates the border from another timeline layer instead of the chosen Color. If you do not assign a layer to this menu, the specified Color is used.

The Border 2 On and Border 3 On checkboxes enable the second and third borders. These are ignored if the Master Borders On checkbox is deselected.

Working with the Pattern Parameters

The Pattern menu sets the type of pattern. The available patterns depend on the wipe shape that you use. Experiment with these options to find one that works for you.

Pattern Amount controls the amount of distortion created by the chosen pattern from the Wipe Pattern menu. At a value of 0, no pattern is created.

Pattern Rotation adjust the amount of rotation for the chosen pattern. The affect increases as Pattern Detail increases, especially for the wave patterns. This parameters only affects the Multi Stretch Wipe and Radial Wipe.

Pattern Variation randomizes the pattern. The nature of the variation depends on the chosen pattern.

Pattern Motion auto-animates the position of the pattern. The nature of the animation depends on the chosen pattern.

Working with the Influence and Influence Map Parameters

The Influence and Influence Map parameters allow a channel in the incoming or outgoing clip to influence the wipe. The influence layer pushes the wipe border in or out based on the value of each pixel.

The following examples show a Linear Wipe with Influence used on different images.

The Influence menu allows you to turn the Influence On or Off. When Off is chosen, the other parameters have no affect. Choosing View lets you see the influence map after it is processed by controls in the Influence Map group.

The Inf. Layer menu lets you choose the layer that is used for the influence. If you do not assign a layer to this menu, the other parameters have no affect.

The Channel menu allows you to choose the channel that is used for the influence.

Blur applies a blur to the edges of the Influence channel before creating the wipe.

Choke applies a choke to the wipe. Positive Choke values tighten the matte, while negative values expand the matte.

If the Bidirectional Influences checkbox is deselected, a positive influence value always reveals more image, and a negative value hides more. If this checkbox is selected, the influence can go in both directions.

Working with the Texture Parameters

The Texture menu controls which type(s) of texture map influences the wipe.

Texture Intensity scales the intensity of both the Fractal and White Noise. Negative values reverse the effect, causing pixels that would become more transparent to become more opaque and vice versa.

Fractal Intensity adjusts the intensity of the Fractal Noise texture if Fractal Noise or Fractal and White Noise are chosen in the Texture menu.

The choices in the Fractal Type menu set the general appearance of the Fractal Noise texture. Choose Smooth, Bubbly or Stringy.

Fractal Flow Rate set the speed of the motion of the Fractal Noise texture pattern.

Fractal Flow Direction sets the direction of the motion of the Fractal Noise texture pattern.

Fractal Morph Start controls the look of the Fractal Noise texture at the first frame of the effect.

Fractal Morph Rate determines the rate at which the Fractal Noise texture surges and rotates inward as the filter auto-animates.

Setting the Downsample menu to 2 speeds rendering by creating a smaller (downsampled) Noise map. This can make the filter appear rougher, which is useful for some effects.

Noise Intensity controls the intensity of the noise texture.

Noise Softness controls the softness applied to the noise texture.

Noise Seed determines the value input to the random number used by the filter to create the noise. Adjust this value when you like the overall appearance of the noise but want to change the random configuration.

If the Bidirectional Textures checkbox is deselected, a positive texture value always reveals more image, and a negative value hides more. If this checkbox is selected, the texture can go in both directions.

Gamma controls the value of the middle tones while leaving the white and black of the image unaltered. The Gamma adjustment is made to the derived alpha. Increasing gamma spreads the alpha so that the matte created by the wipe is more opaque. The affect of Gamma is much more noticeable at high softness values.

Post Blur blurs the alpha channel after the matte is created. Use Post Blur to soften the edge in the matte for sources with high contrast edges.

Working with the Composite Parameter Group

The controls in this group let you composite an underlying clip with the source image, and allow brightness, contrast, and apply modes to be used in the blended region.

The Background menu allows you to choose a layer to composite below the source image.

The Blend menu lets you choose an apply mode to use in the blended region. For more information about the Apply Modes, Click Here.

Blend Brightness adjusts the brightness used in the blended region.

Blend Contrast sets the amount of contrast used in the blended region.

**Ease In:**Control how quickly or slowly the effect amount increases at the beginning of the transition.