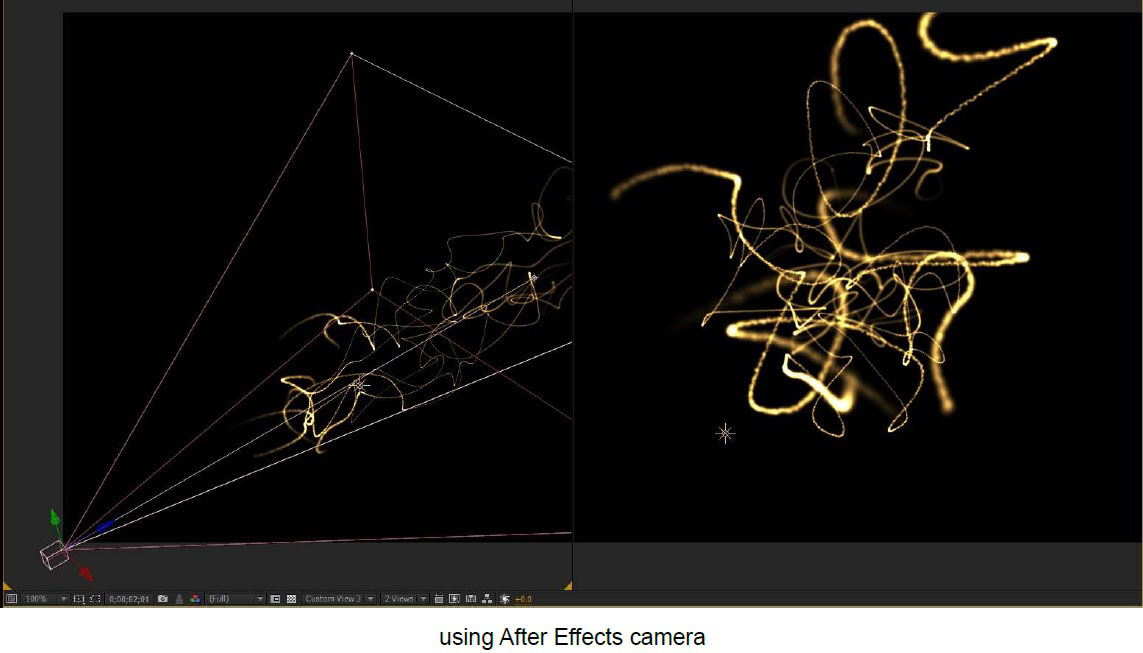 BCC Organic Strands is a particle based effect used to generate 3D strands with interesting looks and convenient animation options.

Anti-Aliasing is a smoothing process that applies to 3D and alpha edges in the effect if they appear jagged. Anti-Aliasing can slow down the responsiveness of working with the effect and so by design the plugin will not apply any Anti-Aliasing when the layer the effect is applied to is set to Draft mode. Also, using a higher AA setting will result in a somewhat slower render than using a lower AA setting so AA should only be set as high as is visually necessary to smooth the effect.

Opacity Boost can be used to uniformly adjust the overall opacity of the particles. It can be useful used in relation to other parameters creating varied opacity such as Motion Blur, Opacity Evolution, Random Opacity, etc.

Use Source As Mask will use the alpha channel of the layer to which the effect is applied to mask the output of the effect.

Use Particle Intersection allows particles to intersect with each other. This render mode can be useful for some kinds of effects but does not support particle images with transparency well.

Depth of Field Blur determines the amount of blur in front and behind the focus of the camera.

Count determines the number of strands

Spread for some Direction choices, it is possible to specify a Spread angle to control the orientation of the strands 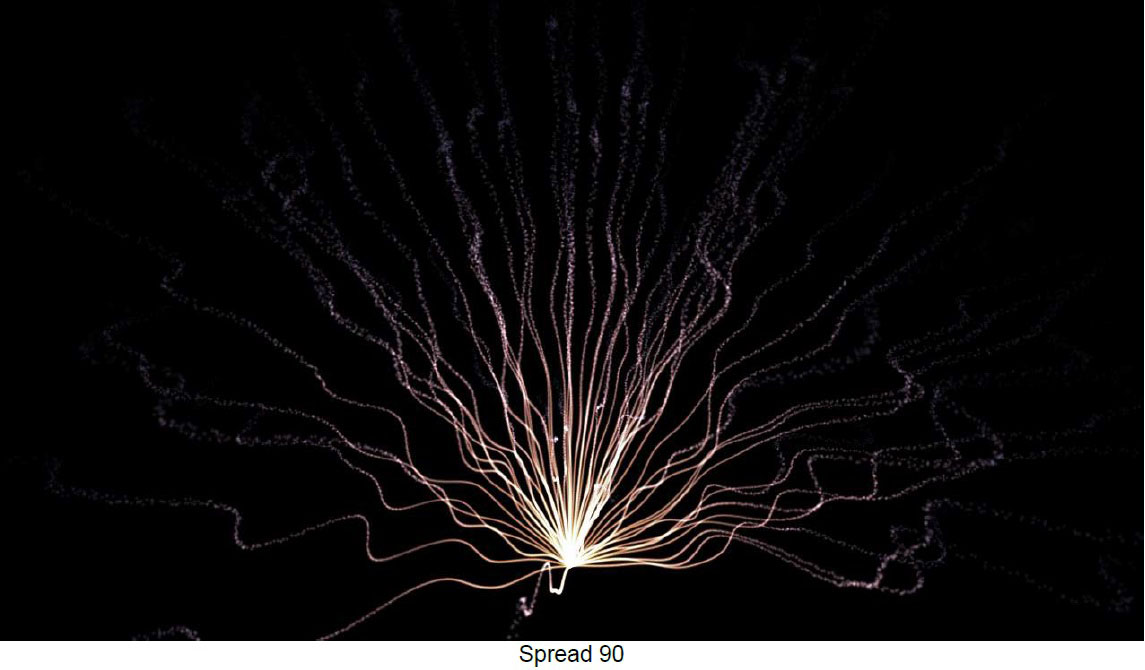 Length determines the length of the strands, while Length Variance allows for varying the Length between strands.

Thickness determines the thickness of the strands by using larger particles to make up the strand, while Thickness Variance allows for varying the Thickness between strands.

Taper and Taper Graph ; allow for varying the thickness along the strands. The left edge of the graph represents the beginning of the strand (nearest the source) and the right edge the far end of the strand 9away from the source). 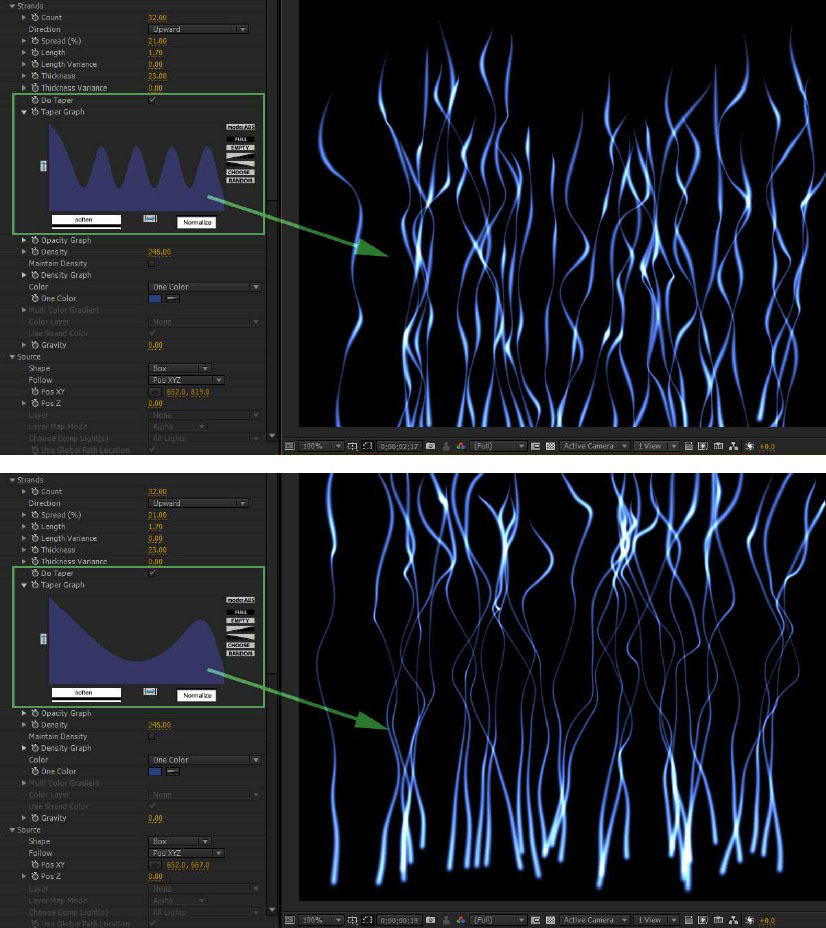 Opacity Graph ; offers the same function as the taper graph, except for Opacity rather than thickness

Color, Multicolor Gradient, and Color Layer ; The Color popup menu enables a variety of options for determining the color of the strands, based on a single color, a gradient generated within the plugin, or an alternate layer in the AE composition.

The BCC Gradient group enables complex, multi-color gradients for use in a variety of effect settings such as colorizing light sources.

For more information on the BCC Gradient tool, Click Here. 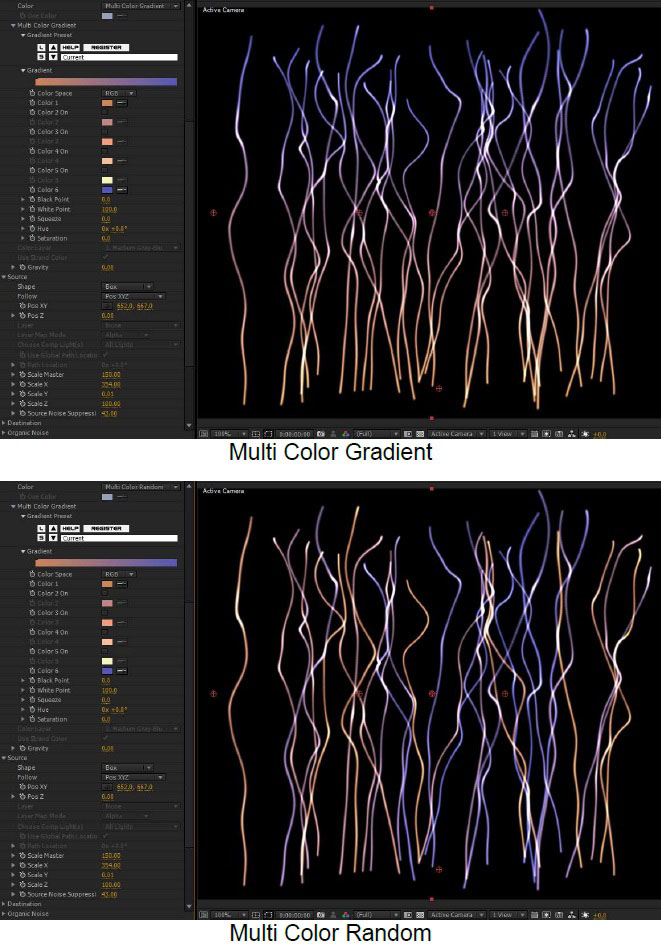 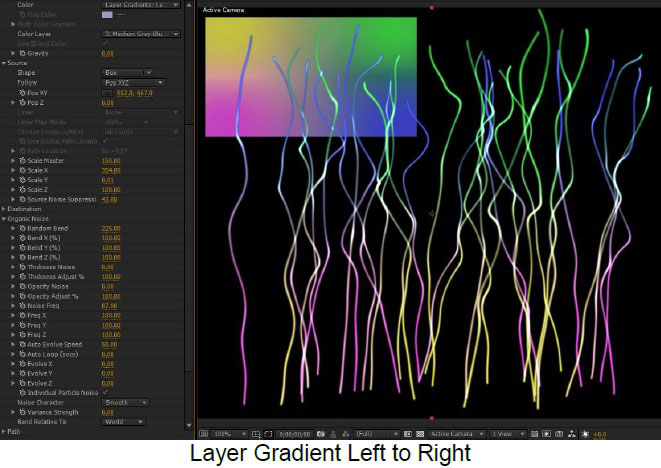 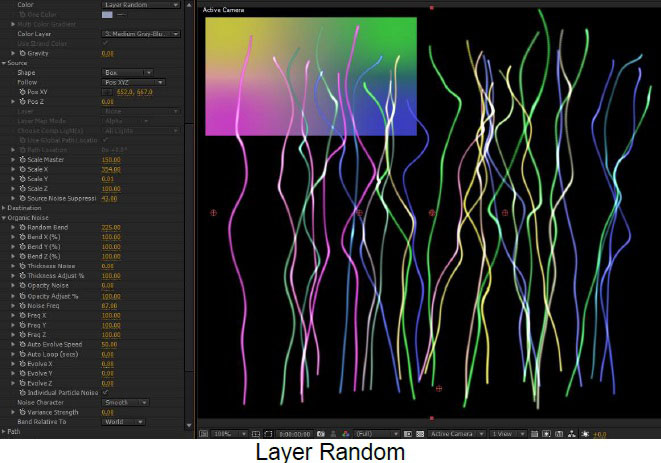 Gravity will pull the strands down (positive Gravity number) or up (negative number) behaving as if the strands are attached to the source shape.

Shape ; the source Shape can be a Point, Sphere, Box, or an AE layer.

Scale Master, Scale X, Y, and Z ; Scale adjustments for the source shape (does not scale the strands themselves or the particles making up the strands)

Source Noise Suppression ; allows for suppressing the effects of the Organic Noise on the source end of the strands

Use Destination Point ; when enabled a point in 3D space is defined as the destination point for the strands

Strength and Pull ; allow for adjusting / animating the effects of the destination point on the strands

Destination Noise Suppression ; allows for suppressing the effects of the Organic Noise on the destination end of the strands

Random Bend, Bend X, Y, and Z ; determines the Amplitude of the Noise pattern that bends the strands

Thickness Noise and Opacity Noise; allow for applying the organic noise patter to the thickness and opacity along the strands

Noise Frequency, Frequency X, Y, and Z ; determines the frequency of the noise pattern with separate control for each axis

Auto Loop ; the number of seconds at which the noise pattern animation will seemlessly loop

Evolve X, Y, and Z ; offsets for the noise pattern animation – can be used to manually animate noise

Individual Particle Noise ; when enabled, each card uses its own noise pattern rather than sharing a noise pattern, which results in an appearance that looks less like waves and more random.

Noise Character ; offers a variety of kinds of noise patterns

Move Progress ; can be used to move the strand in relation to the source (along the strand direction)

Move Random % ; can offset the movement between strands

Loop at Distance ; number of strand lengths at which the movement will loop back to the source

Auto Move and Move Speed ; allow for applying auto-animation to the Move Progress

Global Scale ; scale the overall strands effect including scale of the individual strands and particles

Center X, Y , and Z ; the 3D position of the strand effect

Images – determines the source for the particles that are used to make up the strands. The options are the default Blurs, an image from the Image Collection (a customizable set of still graphics installed on the hard drive), or a Host Image Layer (an alternate layer from the comp)

Image Layer and Layer Mode ; when using a Host Layer image, these parameters allow you to select the layer and to determine which aspects of the image are used in the particles that make up the strands.

Blurriness ; determines the softness of the Blurs when using that image type.

Opacity:Sets the opacity of the particles in the strands.

Transfer Mode and Transfer Composite Mix ; determines the transfer mode used to composite between the particles and strands and allows for mixing the result back to Normal transfer mode.

Rotation, Bi-Directional Rotation, Rotation Random ; options for rotating the particles / strands (effects not noticeable when using round particles such as Blurs).

Disperse Master, Disperse X, Y , and Z ; disperses the particles from their original locations based on a random algorithm – a master control and control for dispersion along the individual 3D axes

Disperse Variance ; allows for adjusting the range of random dispersion between the particles

View Sphere Warpers ; the sphere warpers are 2 spherical fields that can attract or repel the particles that make up the strands

Field of View ; an adjustment that can be used to simulate the look of various lenses – a large value gives a wide angle look

Camera Tumble, Spin, and Rotate ; controls for orientation of the position based camera

Random Seed ; there are several features in the plugin that use some kind of randomization to generate results (Organic Noise, Length and Thickness Variance, etc.). Changing the Random Seed tweaks the random algorithms to produce a somewhat different result. It can be used to simply try a few different takes on an effect and it can also be used when you want another instance of the effect to look the same but not identical give it a different Random Seed value.

Alpha Cutoff %: Determines what alpha value is equivalent to zero for the particle renderer.

Accessing Image Layers; Determines whether (and how) an animated Image Layer used as a particle will loop when the end is reached.

Note that the Beat Reactor propagation options in do not generate the expected result in Organic Strands, and we recommend using non-propagation modes instead in this particular effect.