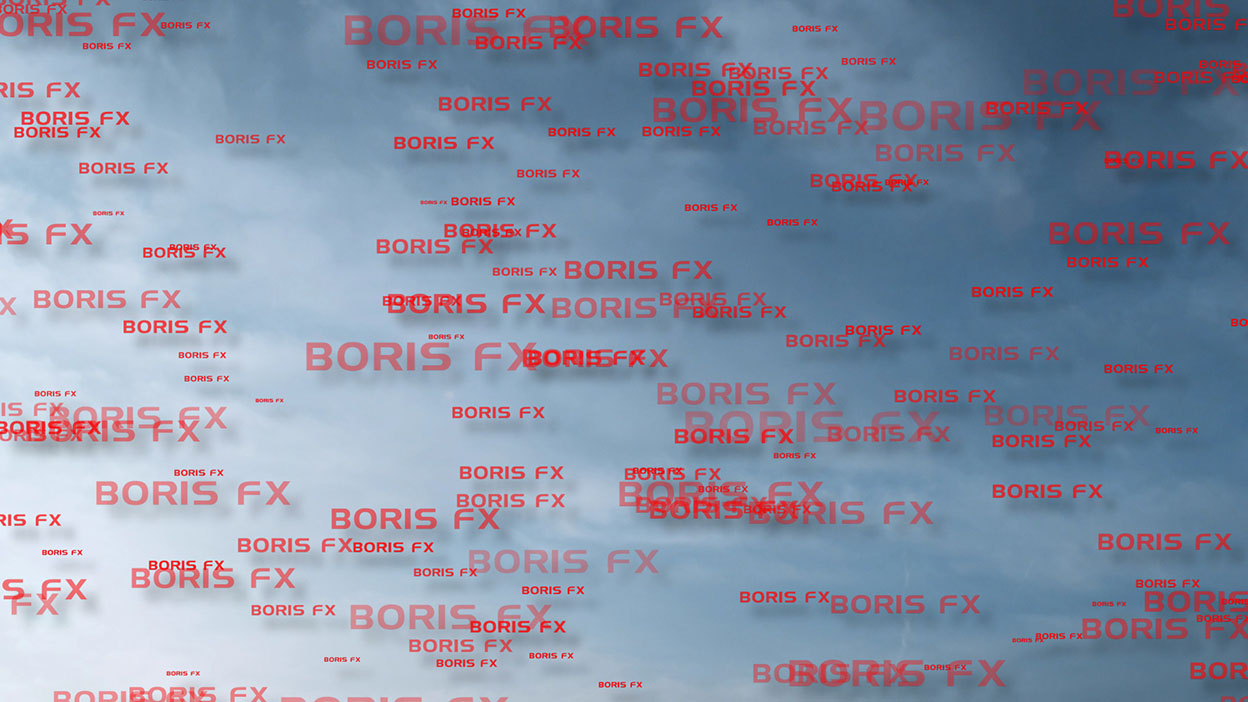 BCC Particle System is an auto-animated particle generator that provides in-depth control over individual particles as well as the overall shape and movement of the system. This filter offers extensive options for adjustment, enabling you to create a wide variety of useful effects. You can control the size, shape, color, velocity, and movement properties of the particles; adjust the size and shape of the particle production area; set points which attract or repulse the particles as they move; control the camera perspective; adjust how particles interact with the edges of the effect; and customize the animation.

Shape Character adjusts the appearance of the particles. The affect of this setting depends on which Particle Shape is chosen.

The Composite with Layer menu allows you to composite the particle system over a layer in the timeline, or to retain an alpha background by selecting the None option.

Birth Rate controls the number of particles produced over a constant time.

The Life Span parameter determines how long each particle lasts before it decays. You can use longer life spans to create trailing effects, as in the examples below.

Center X and Y sets the coordinates of the particle source point.

The Spread Mode menu controls for the overall shape of the particle system.

Gravity applies a secondary force to the particles’ movement as they flow outward from the source. Gravity can either counteract or strengthen the particles’ initial velocity. By default the Gravity Angle is set to 180° (straight down) in order to simulate the effect of gravity in nature, but the strength and direction of the Gravity can be adjusted to produce other effects (such as wind) as well.

Increasing the Air Resistance value adds resistance to the particles, and causes them to decelerate as they disperse.

Velocity Variance varies the speeds of individual particles. Increasing this value creates a wider range of possible particle velocities. Leaving this parameter at the default setting of 0 ensures that all particles will travel at exactly the same speed.

Frequency adjusts the frequency of the sine wave, and therefore the number of waves that the particles create over the course of their life span. A Frequency value of 0 produces no wave motion, so particles travel in a straight line until affected by gravity or other factors. More extreme Frequency values produce very wavy particle paths which make the system appear more chaotic.

The Compositing menu determines how the particles are composited on each other when they overlap. These choices all correspond to apply mode settings. For descriptions of all the possible Apply Modes, Click Here.

The following controls determine the color and opacity of the generated particles, divided into three groups. The Start settings affect the particles as they are produced at the source, the End settings affect the particles as they reach their final destination or decay point, and the Midpoint settings allow you to affect particles differently between the Start and End points. If all the options are used, the effect creates a gradient between Start, Midpoint, and End settings.

Each of the three groups contains the following parameters.

The Color Use menus offer several means by which the particles’ color is derived.

Custom Color selects colors for the Start, Midpoint, and End ranges of the effect. You must set the Color menu (described above) to Custom Color to use this parameter.

The Color Source Layer menus chooses any layer in your timeline to use as a source for particle colors. At the default setting, None, the source image is used.

Start Size adjusts the size of the particles. Note that the Size parameter has no affect on Particle Shapes that are line shapes (Pixel Streaks, Pixel Trails, and Antialiased Lines), but does affect the size of all two-dimensional Particle Shapes (Blurs, Bubbles, Shaded Spheres, 2D Boxes, and Sparkles).

In addition to the Opacity and Size parameters, a Use Midpoint checkbox lets you use Midpoint color and brightness settings that are different from Start and End settings.

For example, suppose you have a stream of particles whose colors change from red at the source, to yellow, to blue at the end. You have also set Opacity to 75% at the start, and 25% opaque at the end. With the Use Midpoint checkbox on, you have to adjust the Midpoint Opacity to 50% to create a smooth Opacity gradient. With this checkbox turned off, the effect interpolates between the Start and End Opacity settings to create a smooth gradient.

System Opacity affects the opacity levels of the entire particle system, after individual Start, Midpoint and End opacity values are taken into account. This slider provides a means of adjusting and animating the opacity of the effect as a whole without changing individual parameters for each range.

System Size Variance sets the range of particle sizes for the entire particle system, after individual Start, Midpoint, and End size values are taken into account. A value of 0 ensures that all particles conform to the chosen Size values for their ranges. Increasing Size Variance creates more disparity between the smallest and largest particles in each range.

System Brightness Variance sets the range of possible brightness values among the particles. Increasing this value creates a system in which some particles are bright and others are dim, and increases the disparity between the brightest and dimmest particles. Leaving this parameter at the default of 0 ensures that all particles have the same brightness value.

These parameters allow you to use another layer to create a custom particle shape. To use a custom shape, place the clip that you want to use on a track below the filtered layer. Then choose this layer from the Custom Shape menu.

The Shape Animation menu determines how the layer information is used to create the custom particle shape when the Custom Shape layer changes or animates over time.

The Camera View checkbox turns on and off the virtual camera. It can be helpful to turn the camera off when adjusting the positioning controls.

Camera Tumble, Camera Spin, and Camera Rotate move the camera around the particle system (including the Floor) on the X, Y, and Z axis respectively. Adjusting these parameters creates the appearance of the entire system rotating in 3D space.

The Pivot Point menu sets the point around which the camera tumbles, spins, or rotates.

The Floor Follows menu sets how the floor moves in relation to the camera and the particles’ point of origin.

The Point Positioning checkbox determines whether the point controls (including the source point and any attractor points) are affected by the movement of the camera. Selecting this option allows you to alter the perspective view of the particle system while retaining the locations of all position points. Deselecting this option causes the entire system, including the attractor and source position points, to move with the camera.

This example shows a particle system with no camera movement applied. Particles are drawn toward an attractor point in the upper right-hand corner.

In this example, the camera is spun with Point Positioning Ignore Camera deselected; therefore, the generation and attractor points spin along with the camera. Notice that the apparent position of the attractor point has changed and particles are drawn toward the upper left-hand corner.

Here, the camera is spun with Point Positioning Ignore Camera selected. In this case, the attractor acts on the particle system after the camera has moved. Thus, the apparent position of the attractor remains constant while the camera view spins.

These parameters allow you to add up to two points of attraction or repulsion to the particle system and to control the strength of these points.

This example shows a particle effect in which the source point is placed near the bottom left corner, and an attractor point is place in the top right corner.

Here Power is increased to 100, so the attractor point exerts a stronger pull on the particles.

In this example, Power value is set to –15, making the attractor point a weak repulsor which pushes particles away.

Attractor X, Attractor Y and Attractor Z set the location of the attractor point on the X, Y, and Z axis, respectively.

Selecting the Attractor 2D Mode checkbox ignores the depth and Z positioning of the attractors. When this option is selected, the attractors affect particles in only two dimensions.

Floor Height adjusts the distance between the floor and the particles’ generation point.

The Interaction Layer menu allows you to choose a layer in the timeline or the particles to interact with.

The Layer Mode menu controls how the particles interact with the chosen Interaction layer.

The Layer Use Channel menu sets the channel in the Interaction Layer used to interact with the particles according to the Layer Mode setting.

The Layer Edges menu sets how the edges of the Interaction Layer interact with the particles.

Floor Size adjusts the size of the floor.

Floor Color sets the color of the floor.

The Start on Frame parameter has two functions, depending on whether the Manual Animation checkbox is selected or deselected.

The Keyframe Animation menu sets how keyframes are affected by changes to the timing of the effect.

If the Use Particle History checkbox is selected, changes made to parameters such as Air Resistance or Gravity affect all particles throughout their life spans, regardless of when the particles are created or disappear. If this option is deselected, the particles are affected only by the current settings at their time of birth. Thus if Use Particle History is deselected, changing the Gravity value only affects particles created after the value is changed.

Time Limit sets the duration of the particle production period.  A value of 10 causes particle production to occur for ten frames and then stop, and so on. This can be useful to create explosions, such as fireworks, in which particles are produced for only a short time and then disperse for the remainder of the effect.

Time Scale allows you to adjust the timing of the effect by stretching or speeding time. Decreasing Time Scale below the default value of 100 stretches time. Thus, the effect appears to take place in slow motion, with particles taking more time to reach their destination or die. Time scale values greater than 100 speed time, moving the particles more quickly.

Selecting the Reverse Time checkbox reverses the animation of the effect, whether it animates automatically or manually. With Reverse Time selected, particles move toward the generation point and disappear rather than emitting from the source point and dispersing.

Increasing Delay from the default value of 0 causes particles within a certain distance of the production area to remain invisible. Delay can be used to create effects with no visible production center, since particles do appear until they have dispersed to some extent.

Random Seed determines which value is input to the random number generator used by the effect. Adjust this setting if you like the general appearance of the effect but want to change the random arrangement of the particles.

The Optimize Algorithm checkbox helps speed rendering times without affecting the apparent quality of the image. Deselect this option if there are jumps in the render.