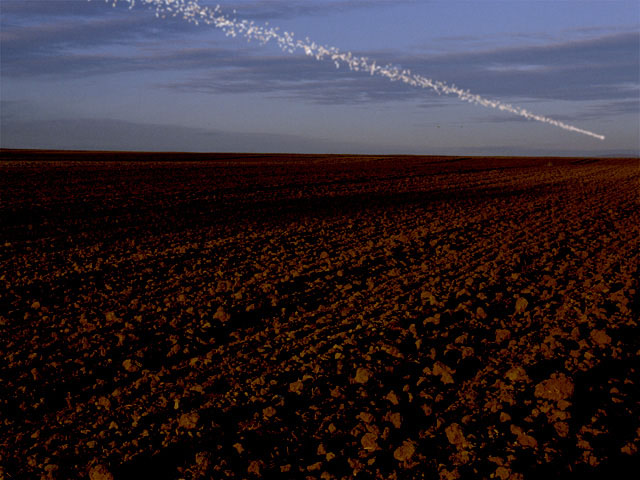 Comet creates an auto-animated comet that streaks across the screen. The comet is compromised of particles whose sizes, shapes, and colors can be adjusted. You can also set the length and speed of the effect, adjust the camera perspective, position the starting and ending points of the comet, and apply a gravitational force to adjust the comet’s movement.

When you play the effect, the comet’s position automatically animates from the source point to the destination point.

Source XY sets the comet’s source point on the X and Y axis.

Destination XY sets the comet’s destination point on the X and Y axis.

Select the Composite on Alpha checkbox to composite the comet over a transparent background. Deselect this option to use the filtered layer as the background for the effect.

Gravity allows you to apply a second force to the movement of the comet. Increasing this value pulls the comet increasingly strongly in the direction of the Gravity Angle as it moves from its source to destination points.

Camera Zoom moves the entire comet toward and away from the viewer. At a value of 0, the comet is infinitely far away and becomes invisible. Increasing this value brings the comet closer to the viewer.

Particle Character adjusts the look of the particles. The affect of this setting depends on which Particle Shape is chosen.

The Compositing menu controls how the particles are composited on each other when they overlap. These choices all correspond to apply mode settings. For descriptions of all the possible Apply Modes, Click Here.

Opacity Boost affects the opacity levels of the entire comet, after individual Start, Midpoint and End opacity values are taken into account. This provides a means of adjusting and animating the opacity of the effect as a whole without changing individual parameters for each range.

Size Variance sets the range of particle sizes for the comet, after individual Start, Midpoint, and End size values are taken into account. A Size Variance value of 0 ensures that all particles conform to the chosen Size values for their ranges. Increasing Size Variance creates more disparity between the smallest and largest particles in each range.

Each of the three groups contains the following parameters.

The Color controls select colors for the Start, Midpoint, and End ranges of the effect. These are arranged from top to bottom in the Effect Editor window.

The Start Color Source menu chooses whether to use the clip layer as a source for particle colors. If the midpoint and end colors are not set, then this is the only color source layer used. At the default setting, None, black is used.

Particle Size controls the size of the particles. The Particle Size parameter has no affect on particles that are line shapes (Pixel Streaks, Pixel Trails, and Antialiased Lines), but does affect the size of all two-dimensional Particle Shapes (Blurs, Bubbles, Shaded Spheres, 2D Boxes, and Sparkles).

In addition to the Opacity and Size parameters, a Use Midpoint checkbox enables you to use Midpoint color and brightness settings that are different from Start and End settings. For example, suppose you have a stream of particles whose colors change from red at the source, to yellow, to blue at the end. You set Opacity to 75% at the start, and 25% opaque at the end. With the Use Midpoint checkbox on, you have to adjust the Midpoint Opacity to 50% to create a smooth Opacity gradient. With this checkbox turned off, the effect interpolates between the Start and End Opacity settings to create a smooth gradient.

Particle Velocity determines the amount of force with which particles move away from the center of the comet as the comet moves.

Tumble, Spin and Rotate move the comet around the X-, Y- and Z-axis, respectively.

Increasing Delay from the default value of 0 causes particles within a certain distance of the comet’s head to remain invisible. Delay can be used to create a comet with no visible production center, since particles do not appear until they disperse to some extent.

Time Scale allows you to adjust the timing of the effect by stretching or speeding time. Decreasing Time Scale below the default of 100 stretches time. Thus, the effect appears to take place in slow motion, with particles taking more time to reach their destination or die. Time scale values greater than 100 speed time, moving the comet more quickly.

Selecting the Optimize Algorithm checkbox helps speed rendering times without affecting the apparent quality of the image. Deselect this option if the render jumps.

Random Seed determines which value is input to the random number generator used by the filter. Adjust this value when you like the overall effect but want to adjust the random configuration of the particles.