Unlike with the blur shader, Glow Styles are selected directly from shaders menu. Once selected, the Material Attributes window will update to reflect the parameters specific to the selected glow style. Each glow offers a selection of standard compositing options such as add, multiply, overlay, etc.

Glow Edge Generates a traditional film glow where the object(s) are subjected to a strong light causing the image to bloom however, the Edge Glow derives the glow result from the edges of objects in the scene. Additional compositing modes are available to provide highly detailed customization.

As seen with the tradtional Blur shader, Glow Edge contains parameters for Master Blur, which controls the overall softness of the glow, as well as parameters for Blur X and Blur Y. These options allow artists to stretch the glow along the X and Y axis.

In this example, the Master Blur is increased to 250, and the Blur Y and Blur X are decreased to zero respectively to create interesting title effects.

Output Color allows you to change the color of the glow either from the color chip, or by using the eyedropper.

The Use Image Color checkbox will override the Output color, and base the glow off the source image.

X Amount and Y Amount: independent contros for the width and height of the glow. These differ from the Blur X and Y in that, the glow itself is being stretched along the X and Y Axis, rather than the softness of the blur.

Glow Light generates a traditional film glow look, where the object is subjected to a strong light source causing it to bloom.

Parameter controls for Glow Light are similar to those found in previous shaders. The color of the glow is based on the source object.

Master Blur controls the overal level of glow present. Higher values will produce softer results, while a value of zero will produce a very sharp glow

Blur X and Blur Y Independent controls for the width of the glow.

Intensitycontrols the intensity of the glow result. Higher values yield a stronger glow with a total white image when this parameter is set to it’s highest value.

Mix With Original blends the glow effect back with the unfiltered input object.

Glow Light Replace Color: as it’s name implies, this type of glow creates a traditional blooming effect, but allows you to select a specific color.

To change the color of your glow, use the Output Color eyedropper or color chip.

Glow Light Remove Color allows you to assign a glow to a specific key color, preventing unselected colors from glowing. 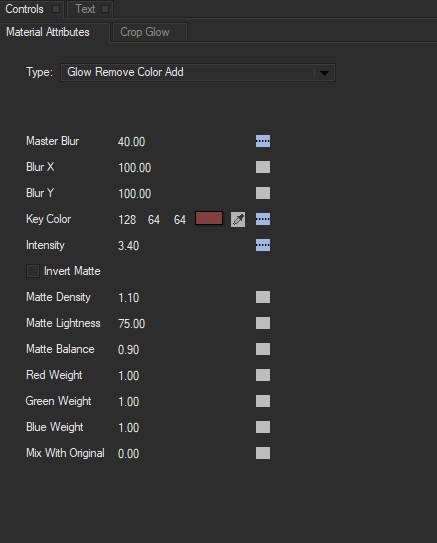 Key Color allows you to select a color with the color chip or eyedropper to pull a matte that can be further refined.

By increasing the Matte Density transparent areas can be made more transparent and opaque areas more opaque. Be aware that too much density can degrade the matte.

IncreasingMatte** **Lightnessmakes the entire matte more transparent. Boosting transparency might be necessary to ensure that the background shows through semi-transparent areas, although too much Lightness can result in print-through–that is, the background image might show through the foreground object.