In this section we will look at creating a basic animated lower third. A lower third is a graphic or banner with text that appears at the bottom lower third of your screen. Lower Thirds can range from simple text and a banner to more complicated animations that use shapes, text, shaders and 3D models. 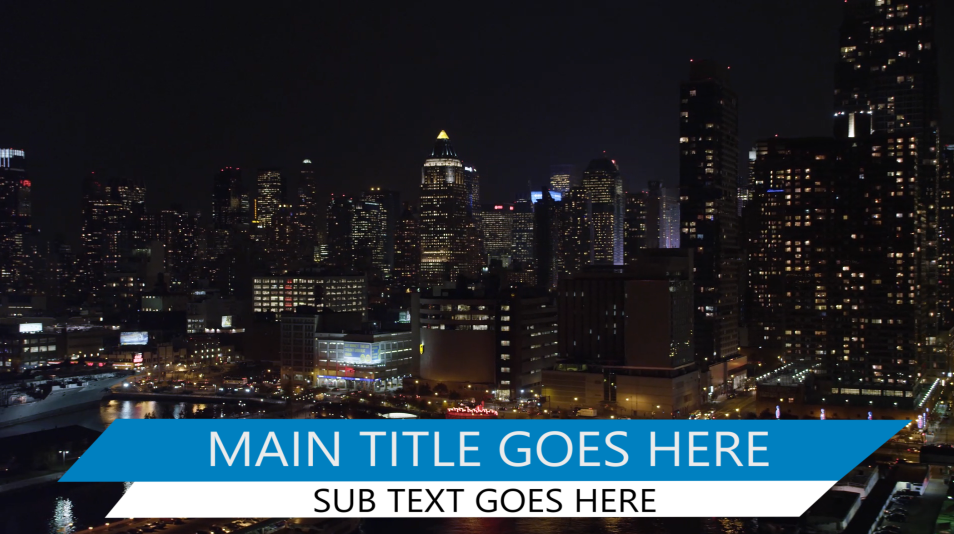 For this tutorial we will focus on creating a basic dual banner using spline objects, animating them, adding primary and sub text, and setting up rigid runs to keep the animation consistent regardless of the length of the clip the preset is applied to.

You can create a new Title Studio project any length you want, but for this tutorial, we will be working with a project length of 5 seconds. While this tutorial will go into depth on how to create the effect, it’s recomended that you review the basics of Title Studio, such as creating text and animating keyframes before you continue.

The first step in creating any kind of lower third is to set up the motion graphic as it will appear when it’s fully on screen. Don’t worry about animating it on or off yet, let’s just focus on creating the finished look. 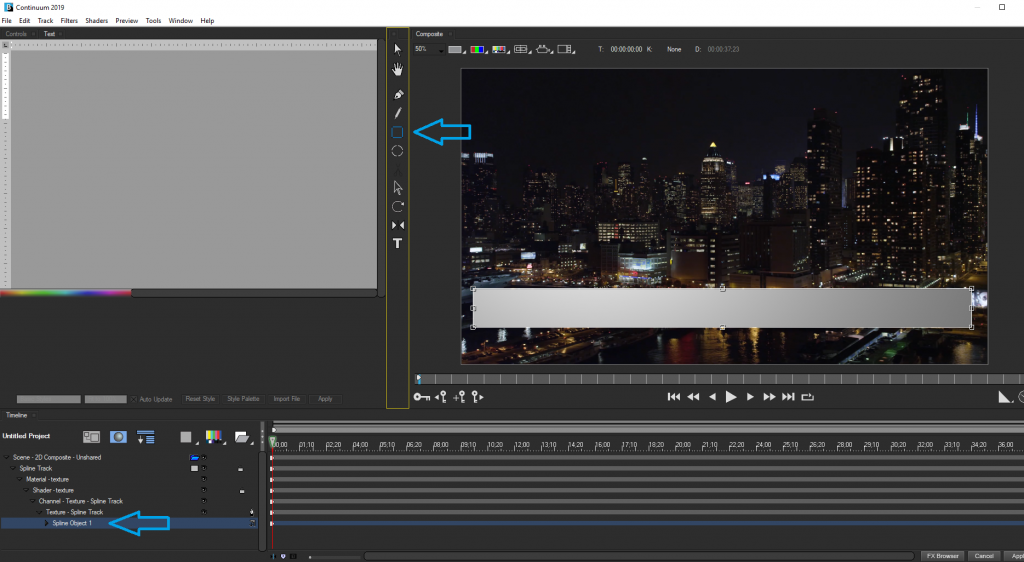 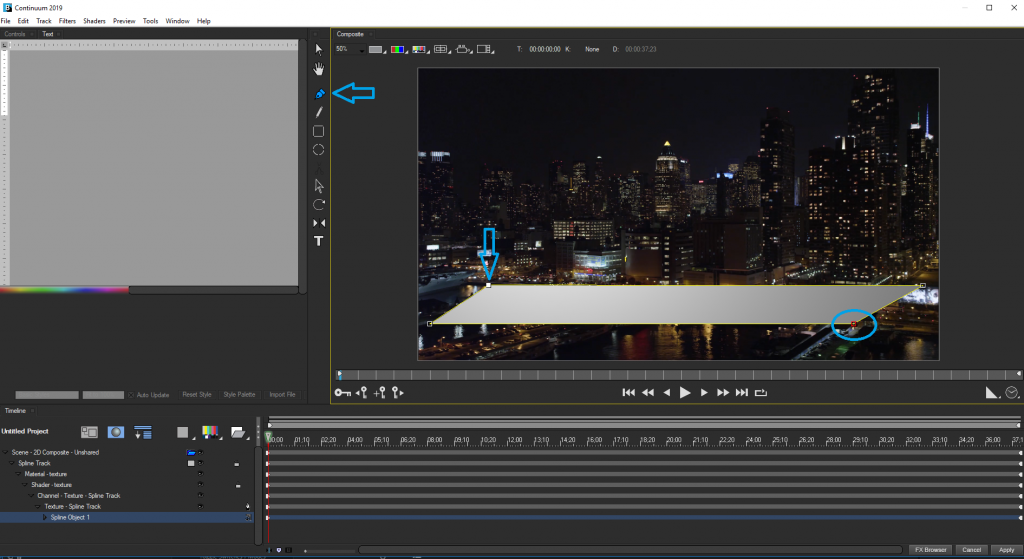 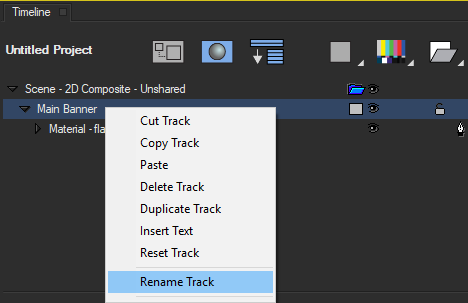 To create the second half of the banner where our subtext will go, we will want to repeat the process used in Step 1, however there is a faster way to quickly create a sub banner. 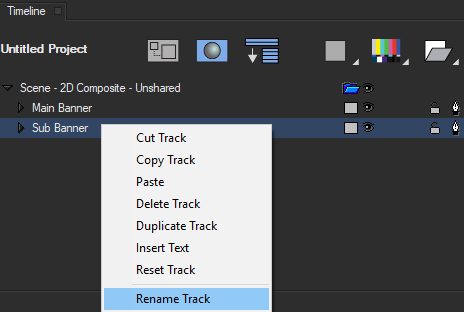 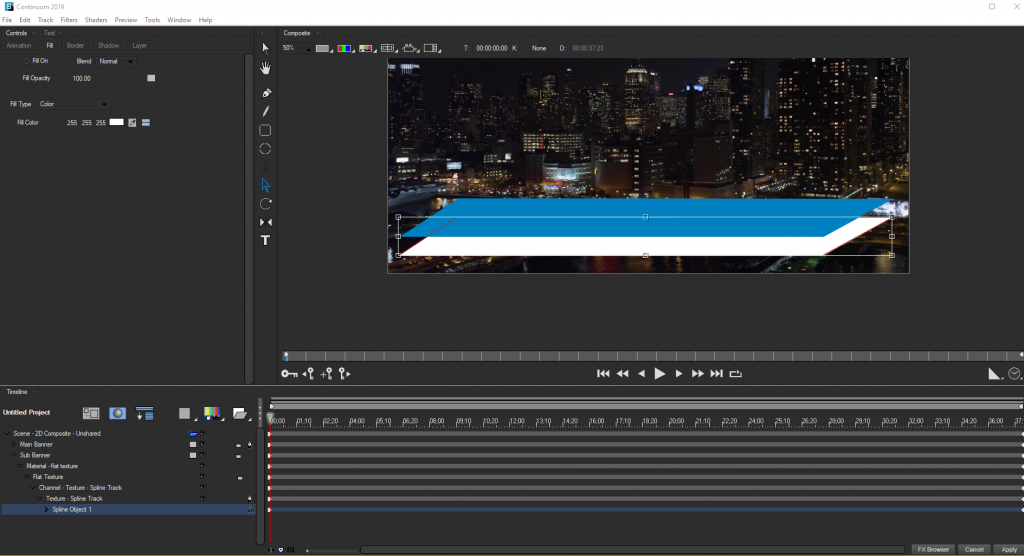 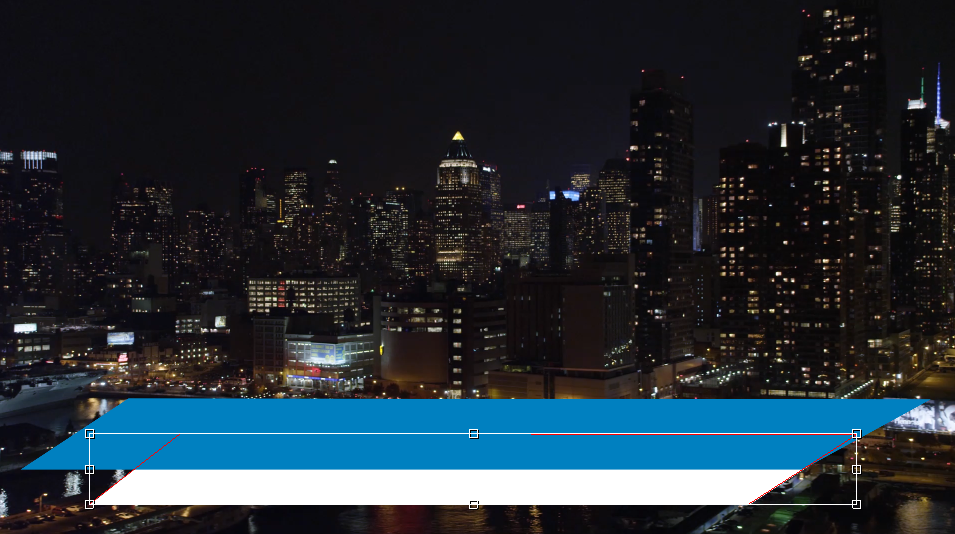 Creating the text is the easiest part of the exercise, and is largely up to you how you want to design it. In this case we will want to create two seperate text tracks.

Feel free to experiment with different fonts, kearning and sizes to get the look that works for you. But ultimately, once you’ve set up the text as needed, it’s time to animate the effect. 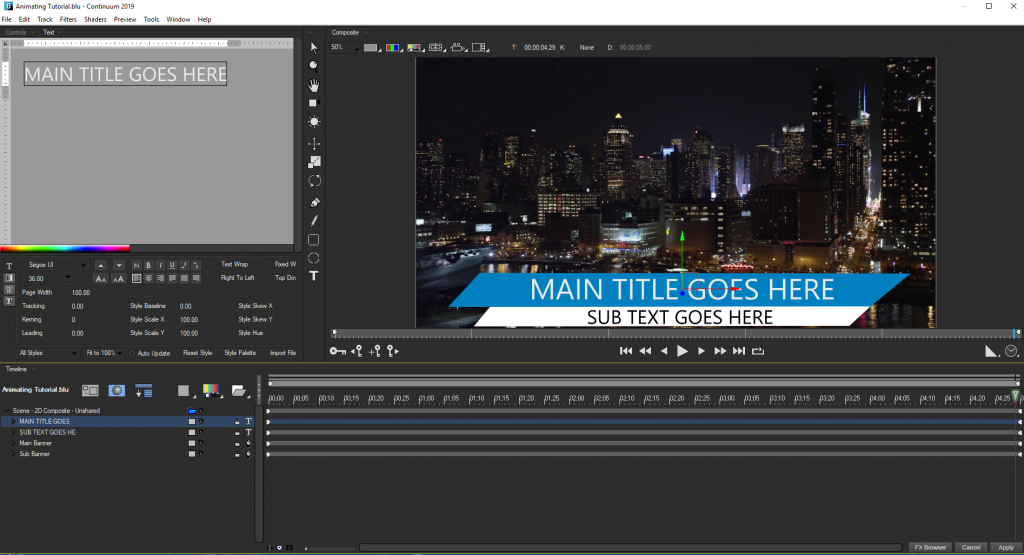 The goal to animate this lower third will be to have the main banner slide on from the left of the screen, and then have the sub banner drop down from behind. It will then animate off in reverse.

To do this, we will first want to group the various elements into 3D Containers. This will allow us to animate each seperately, as well as together. 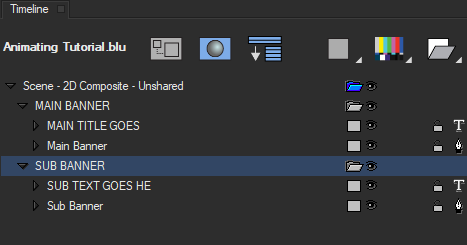 By doing this, I am now able to animate the position of either the individual tracks, or the container that contains them both. This makes it easy to move tracks individually or as a group.

In fact, lets, select both the Main and Sub Banner Containers and place them inside of a new container, which we’ll rename LOWER THIRD. 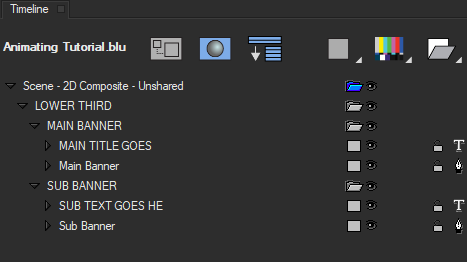 Now, we can control each element, each section, and the whole lower third as a group. Very handy, and very nicely organized.

To begin with, lets move the CTI to about the 20 frame mark and select the Lower Third container track.

While we’re at it, lets animate the effect off at the end.

One final thing we can do is animate the sub text so that it slides on after the Main Title has animated on. To do this, we are going to have it drop down from behind the Main Banner.

Since this will animate seperately from the man banner, we will want to make sure that the Sub Banner container has been selected. 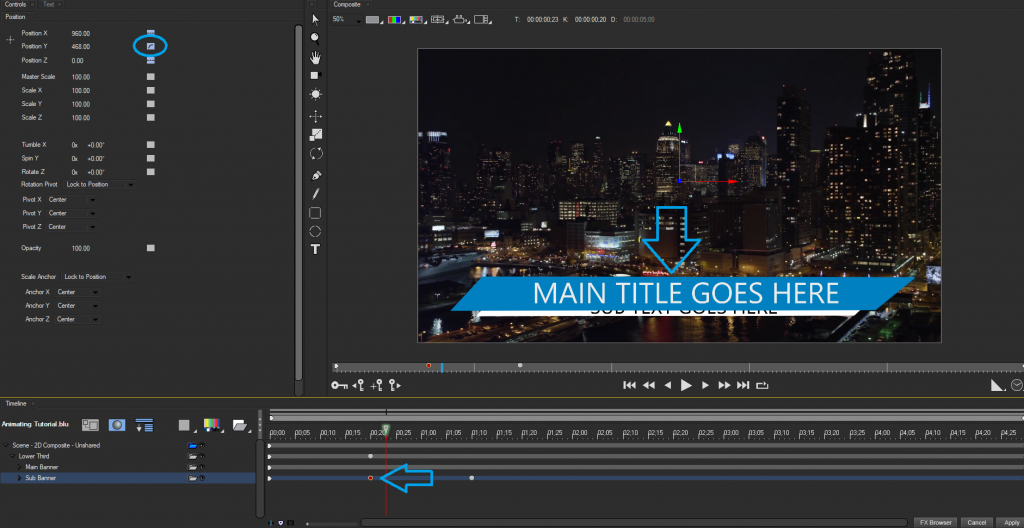 One important feature of Title Studio is the ability to easily create what’s known as Rigid Runs. In this tutorial we have created an effect based off a 5 second clip. However, often, the presets we create will need to be applied to clips of varying length. If our Lower Third preset was applied to a 10 second clip, the animation that we created for 5 seconds, would now take 10 seconds to animate. While this would be perfectly fine for the main section where the lower third is fully displayed, it would cause the on and off animations to render half as fast as we originally wanted them to.

To keep animations exact, but allow for the non-animated portions to stretch to fit the length of a clip we can employ Rigid Runs to define the areas where Title Studio should use the original animation length.

In our example, we would want to place a rigid run at the very begining, until the 1:10 mark, when the animation ends.

To do this, right click on the timeline and select Add Rigid Run. 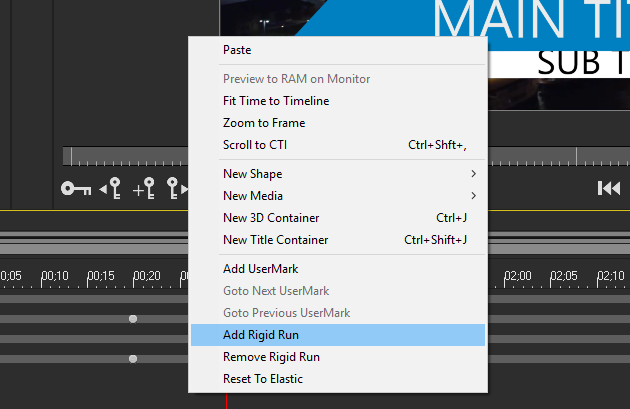 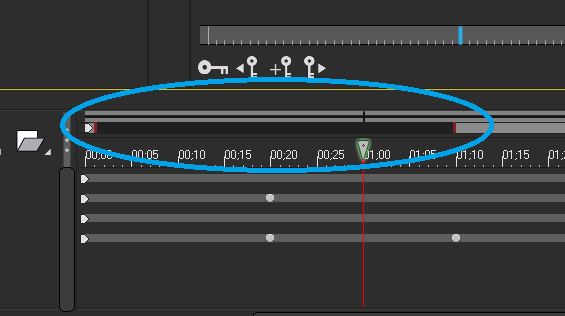 Title Studio will now maintain the animation timing within this range. In essence, regardless of the clip length, the animate on effect will always take 1:10 seconds.

Repeat the Process for the Animate Off portion of the effect. 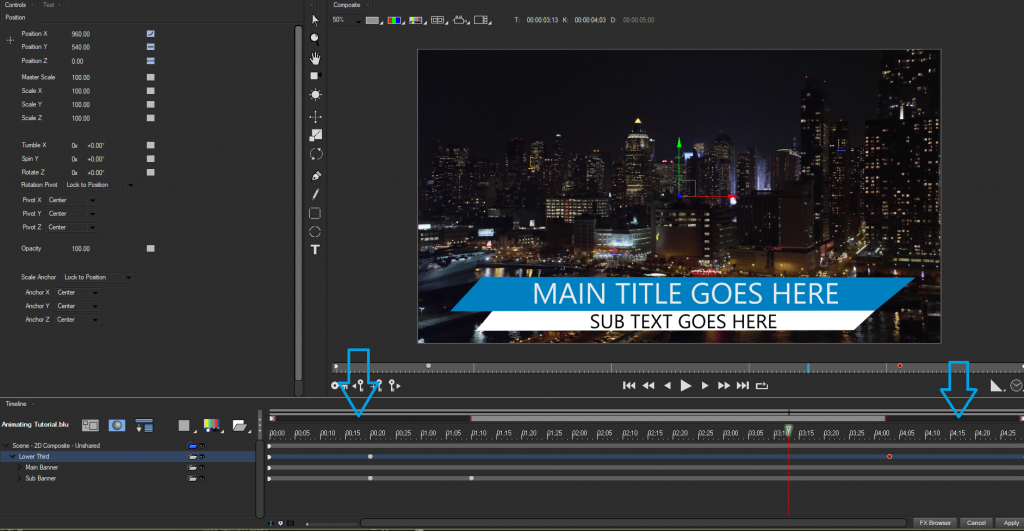 Now, Title Studio will always maintain the timing for the animate on and off, but allow the main section of the effect to stretch to fit the clip.

NOTE: Because Rigid Runs maintain the animation timing of a section of the motion graphic, if the Motion Graphic is applied to a clip that is LESS THAN the length of the original Rigid Run, the effect will not render correctly, because the animation will overlap.

Always make sure that you apply an effect with a Rigid Run to a clip of equal or greater length.