Director Greta Gerwig’s Little Women is a love letter to Louisa May Alcott’s classic coming-of-age novel with a decidedly modern spin. You might not necessarily think visual effects when you watch the six-time Oscar-nominated film (including Best Picture) and that’s exactly the point. Invisible VFX work seamlessly blends in.

The film was shot entirely in Massachusetts where the novel is set. To further cement a local connection, Boston-based Zero VFX was hired as the lead visual effects vendor. We chatted with Brian Drewes, VFX Supervisor, to find out what it was like to work on set, what the biggest visual effects challenge was, and the importance of having Boris FX tools at their disposal.

(Editor’s note: I saw Little Women on 35 mm, loved every second of it, and cannot believe that Greta Gerwig is not nominated for Best Director!)

You’ve worked as a VFX supervisor and producer on so many great films. What led you to a career in visual effects? How did you get your start?

Funny story… In college, I studied environmental science and sustainable agriculture. I grew up in a very science-minded family so I always thought in one way or another that’d be what I did. So I studied zoology, entomology, soil science, stuff like that. Then, one day, a filmmaking student/friend showed me how to use an Oxberry Animation Stand… From that moment on I changed everything. The idea of being in a creative field was something I hadn’t considered previously and thankfully it happened… I haven’t looked back. In fact, all the time I spent studying the environment has helped me immensely, and perhaps one of the reasons I really gravitate to photo-real VFX, especially in the creation of environments. I know species. I know about cell structures. I understand why things grow in certain places. It all influences how we build things, because of those things, they all matter. 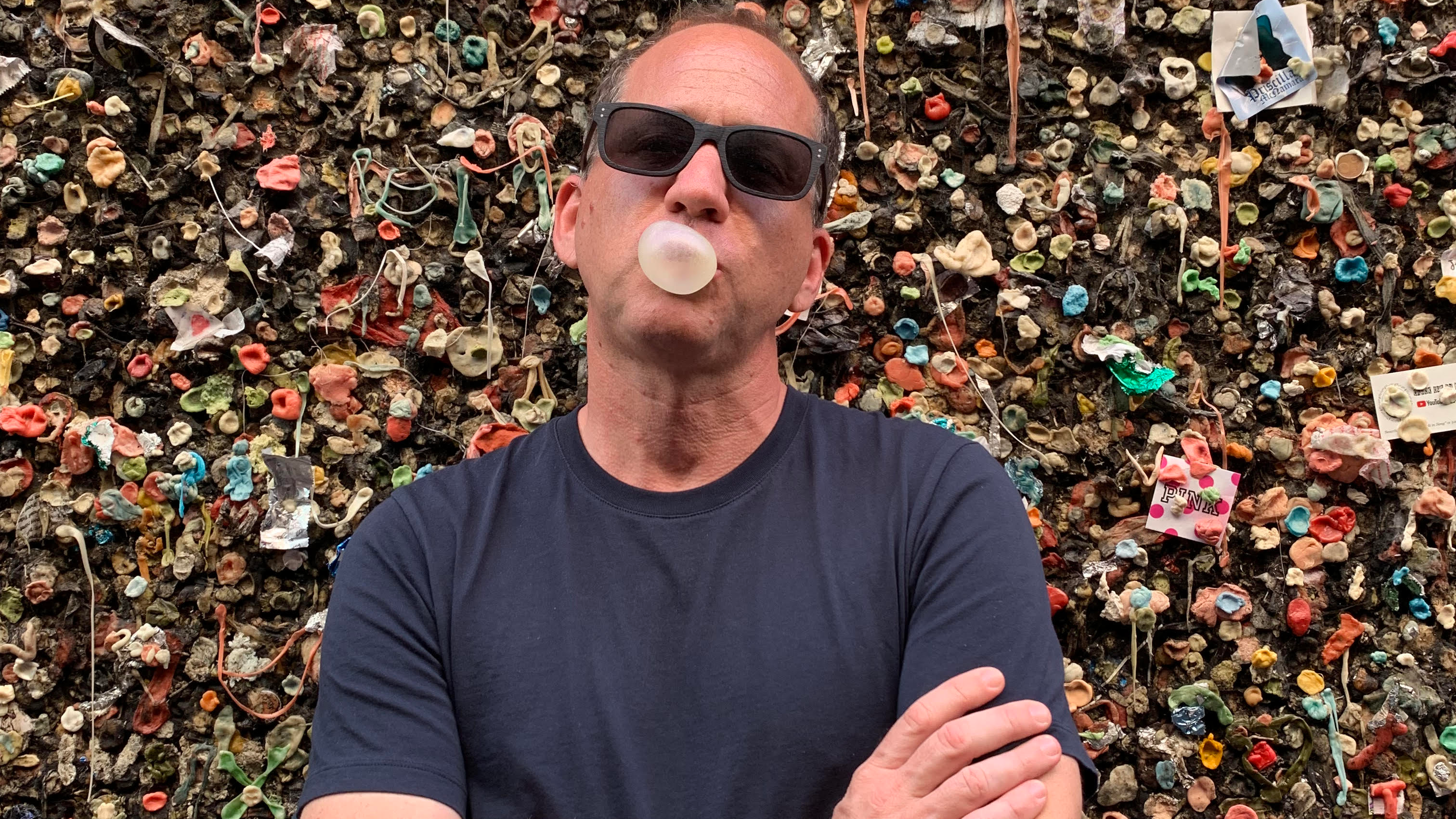 What was it like collaborating with Greta Gerwig on Little Women? Any particular moments that stick out?

Working with Greta and the rest of the production team was amazing. Each movie always has a different set vibe, a different culture if you will. Greta has an amazing way of making sure positivity was everywhere, encouraging the free exchange of ideas while still fulfilling her vision. It was great.

Sometimes it’s a challenge to have an audience that considers the needs of visual effects when shooting on shows that aren’t considered VFX heavy. It requires a deft touch as a supervisor to balance what you absolutely need to get vs. not wanting to make a VFX heavy day feel all that different than a non-VFX day.

Greta really trusted the VFX team and me with leading when we needed to and hanging back when we didn’t. When we got into post nothing changed. It was super collaborative and, most of all, Greta recognized that what we do is in fact art as opposed to a commodity. There was a level of value she placed on our work and honestly, at the end of the day, it was very refreshing. And no doubt, it ripples down and makes the work better.

Filmgoers probably don't think of Little Women as a VFX heavy film. What kind of shots did Zero VFX handle? What was the biggest VFX challenge?

I completely agree and I take that as a compliment especially since in one sequence some shots are 90% digital. (Note: Spoiler alert ahead)

This is the ice-skating sequence where Amy falls into the water and Jo and Laurie save her life. We wanted to keep it outside on the main location where the March and Lawrence houses exist and certainly off a big green screen set. Definite challenges existed. 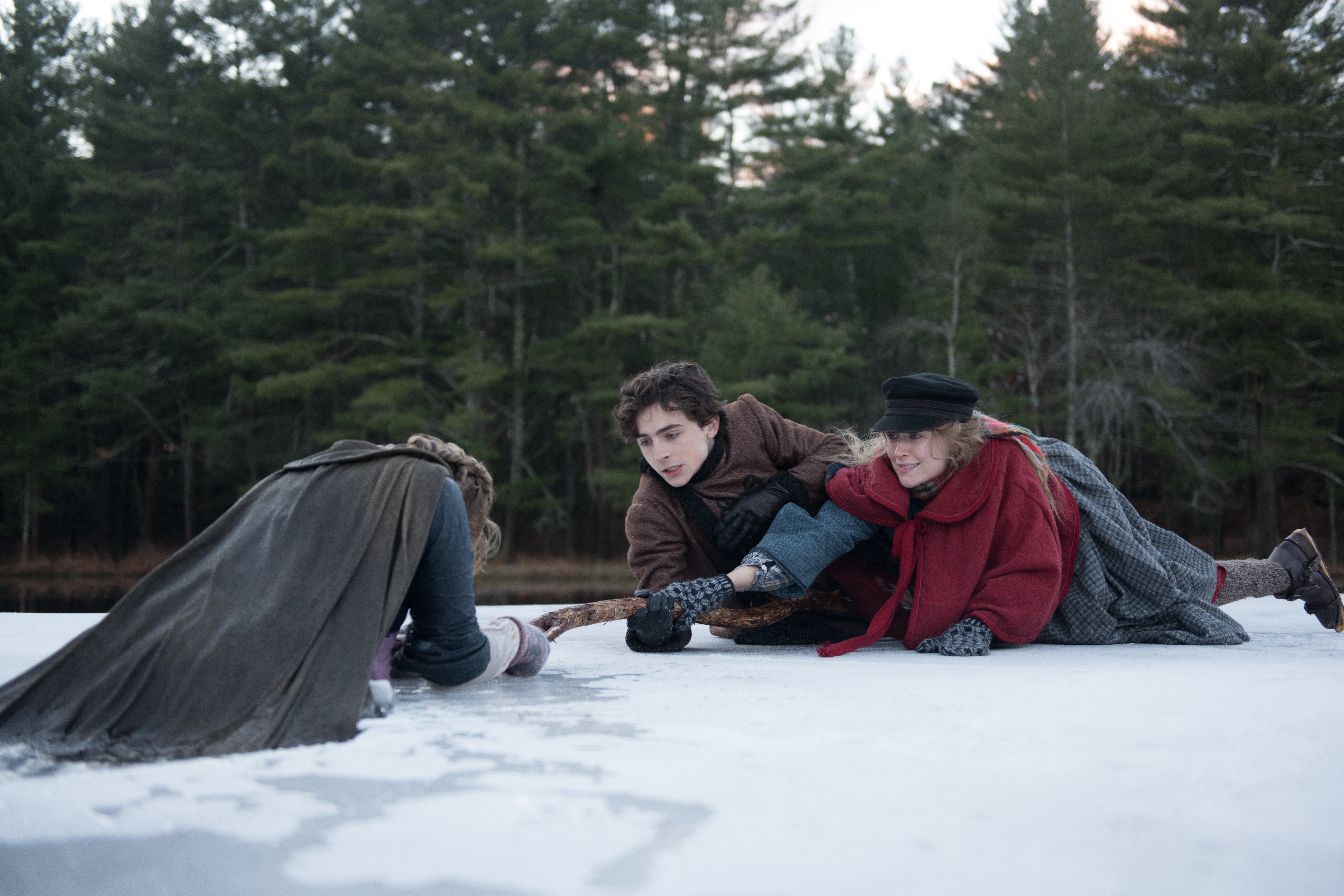 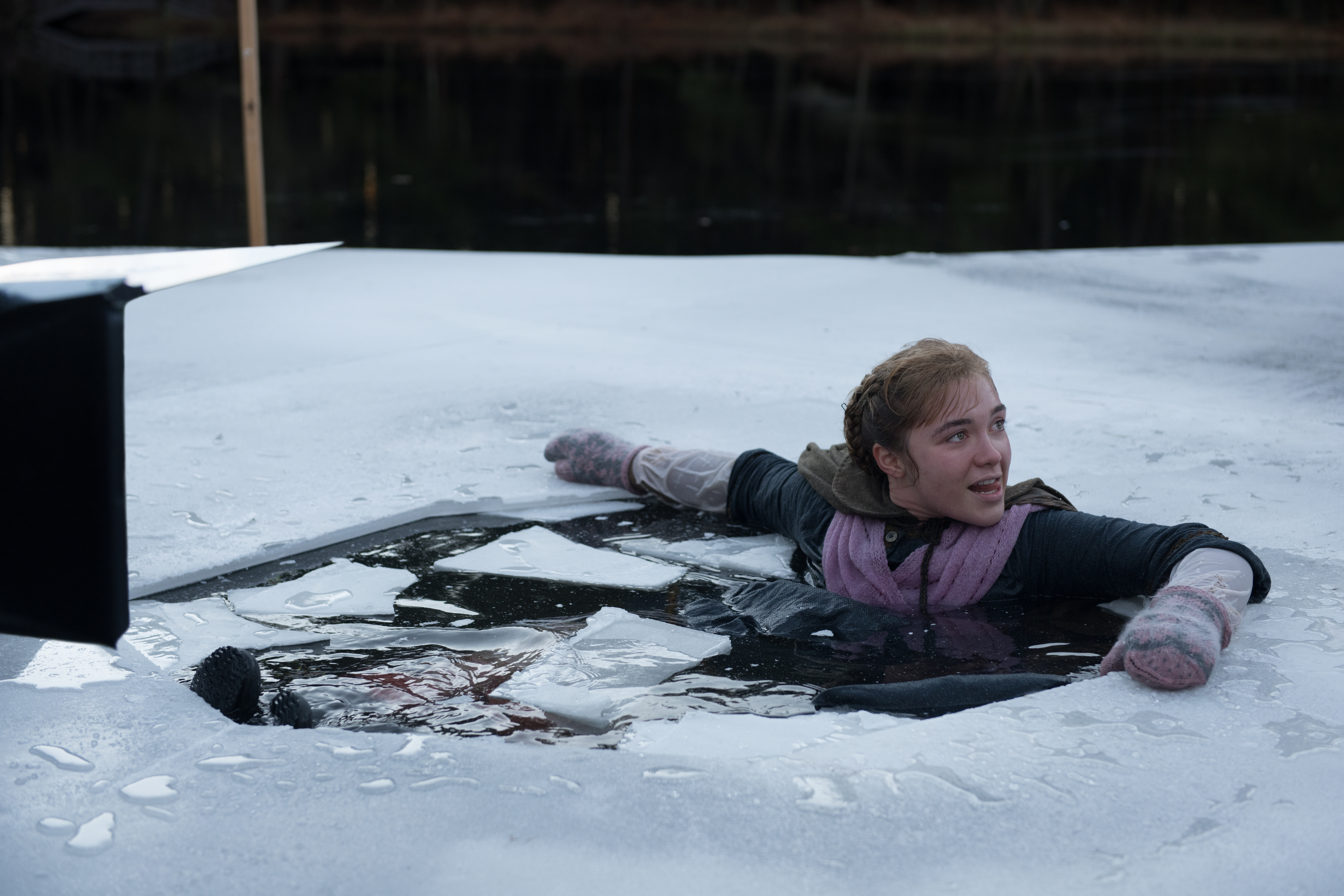 Our actors couldn’t ice skate and there wasn’t the option to have real ice anywhere on our pond. We also couldn’t get much real snow on this specific area of the location due to the fact that it’s massive and would’ve been ridiculously expensive to do a holistic set dress.

I knew we were into full environment builds, closeup CG and interactive ice, broken ice chunks, water, and some face replacements. Early on we discussed the nature of the ice with Greta and Yorick Le Saux (DP). We decided on some concepts that our VFX art director Matt Friedlander and team put together where the ice has a distinctly darker vibe. It felt more authentic and matched the kind of pond ice that forms in early winter in New England.

Then we had to deal with the whole skating part of the equation. We worked closely with the SPFX team to design these really smart antique style skates with little rollers channeled into the skate blade. These were great for wides and in close-ups, we only needed to expand the blade as opposed to an entire boot/ blade replacement. They were designed to make it way easier for the actors to quickly learn on vs. battling with real ice skates. 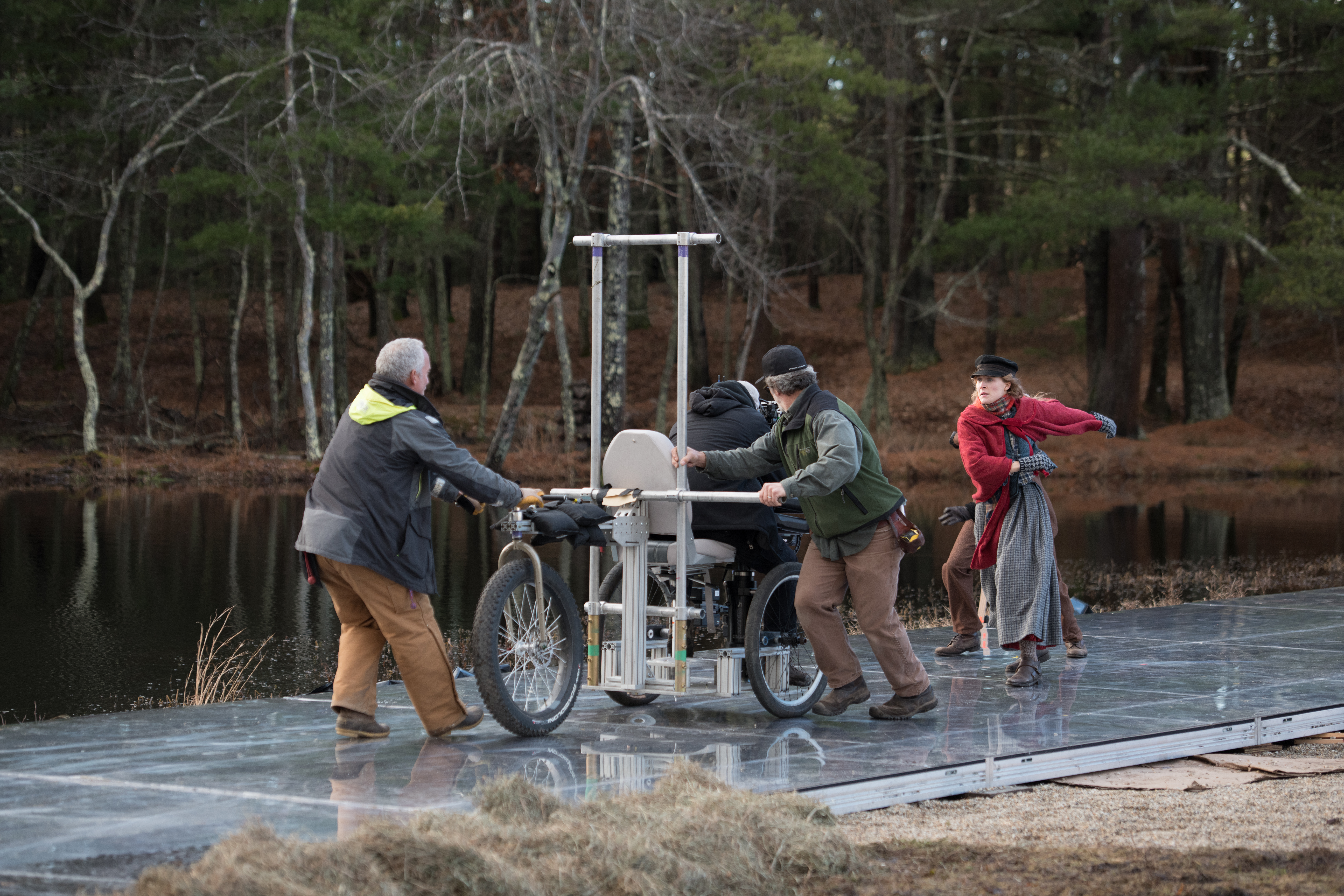 I ended up making the call to build a platform, low to the waterline with black felt sandwiched under plexiglass which was then affixed to the platform. We did a quick scan of the pond with our drone so we could help with the layout and blocking of the action. We built just enough platform not wasting a square foot of the material.

We chose plexiglass vs. a flat white material because it was in the same general range as our concept CG ice especially when lined by black felt. We could actually grab some of the reflections from the plates and avoid any cheats or expensive match moves and digi-doubles for actor reflections. To boot, it helped with my arch-nemesis, authentic contact shadows, in that our compers had something real to bite into a bit. Lastly, we could always go back to the plate and look at the values to help inform our comps. Ice gets really funky when exposure changes and having a ground-truth to help us match into was a difference-maker.

Outside of this sequence, we took care of an early sequence in the movie, the Paris Promenade, where Amy has a scene with Laurie and of course Meryl Streep (Aunt March). This required lots of research and thought again. Our location was decidedly un-Paris-ey so we were tasked with reimagining many of the location details, adding formal elements such as sculpted box hedges, fountains, period gas lights, period buildings, and removal of an asphalt walkway. When you watch it it’s really amazing how the work transformed the scene. It’s pretty cool. Interspersed throughout, there were a ton of smaller period fixes, DMPs, and cleanups. I believe the final shot count was into the 500’s.

I’ve been really into experimenting with how ML (machine learning) can integrate within our pipeline. The trick is designing an ML process that isn’t stuck on an island, as we know quite well we have to leave room in the process for unexpected feedback. It’s about making sure flexibility still exists so you don’t have to start over to address a seemingly small note.

That said I believe there’s some really compelling stuff around the corner. I’m advising a company called comixify.ai, funded by BetaWorks, which is digging around in some revolutionary territory. Never do I see humans eliminated from this process. It’s just a new tool to explore.

Also, real-time is a definitely real thing, even for movies like Little Women. That’s something we are getting ready to integrate into our production pipeline.

These are core tools for us. We literally use them every day in both our commercial and feature pipeline. We are especially stoked on the potential that tight integration between Silhouette and Mocha Pro holds. It will be a massive time-saver!