Stephanie Filo is an Emmy Award-winning editor for her work on HBO’s A Black Lady Sketch Show, a board member for Girls Empowerment Sierra Leone, and is one of the co-founders of End Ebola Now.

She primarily uses Avid Media Composer (but has also cut several other projects on Premiere and Final Cut) and uses Sapphire, Continuum, and Mocha Pro together with her Wacom Cintiq. Her main passion is telling stories as authentically as possible, which takes form not only in the edit bay but also through pushing to make sure diverse voices and perspectives are present both in front of and behind the camera. Follow her on Twitter. 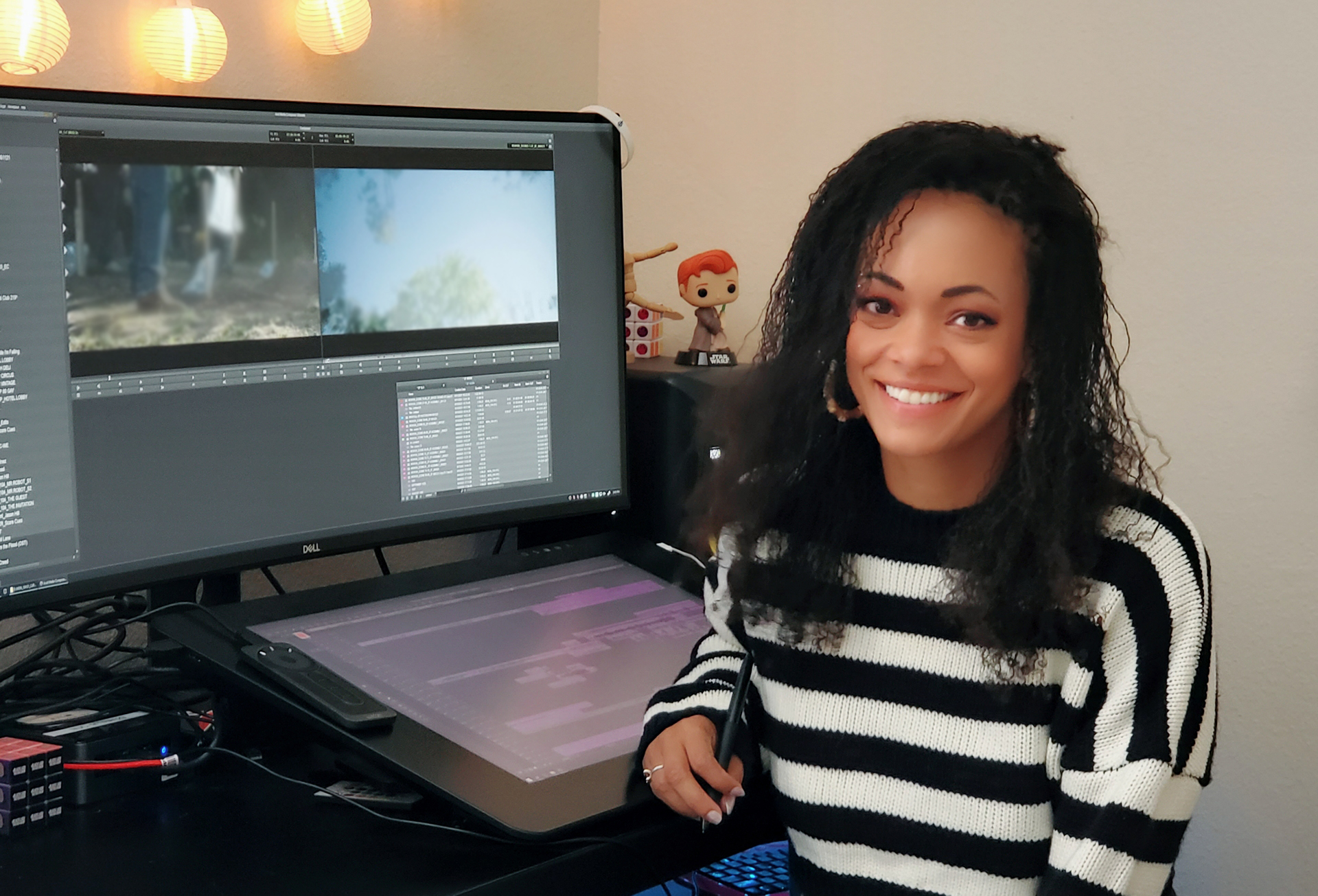 Where are you from and how did you get your start in the industry? I’m originally from Sierra Leone, West Africa, and moved to Colorado as a kid. I was originally a professional dancer but knew that I wanted to be involved in TV and film in some capacity. So, I moved to Los Angeles hoping to find something that would move me in that direction. I eventually was lucky enough to find a job as a night assistant editor on a French documentary, and kind of fell in love with the post process. After I finished that, the editor of that documentary recommended me to a post house that was looking for assistant editors. From there I was able to learn more about all of the different elements of the post process and eventually worked my way up and got my first ‘Editor’ credit on a documentary about Mel Brooks and Carl Reiner’s The 2000 Year Old Man sketch. I adore Mel Brooks and Carl Reiner, and working on that documentary was so great. It solidified my love for editing. From that project, I was able to get more editing work and have been able to continue at it ever since. It’s a field where I feel like you learn something new every single day, so I love that about it!

What are your go-to Boris FX plugins and which effect/features do you rely on most? I definitely feel like I can’t live without Sapphire and Mocha Pro. Sapphire Effect Builder is a great tool because you can create multiple/complex effects in a single effect. A lot of times I’ll like how one person looks in one shot or take and a different person looks in a different take, so I find myself doing a lot of split screens to blend the two, and Sapphire effects are really good at covering up and hiding those sneaky moments.

I also use Continuum’s Rack DeFocus, Primatte Studio, or if it’s a super stylized project I’ll delve into the customizable effects including Lens Flare, Gaussian Blur, Damaged TV, Film Grain, and Jitter. The list goes on and on!

What project are you most proud of and why? This is a hard question to answer because I can’t pinpoint one specific project that I’m most proud of. Every project I’ve worked on has made me proud in some capacity, whether that be the content of the show itself, the camaraderie and passion of the team I’ve worked with or being able to execute an idea in the editing that seemed impossible in its description. I’m super proud of my social impact campaign work through the years, and most recently, I’m really proud of A Black Lady Sketch Show because it’s such a unique show and experience. So much of the editing on the series includes peppering in improv moments and trying to punch up timing and comedy, make moments bigger, and really just layer in as many jokes as possible. It was so fun to collaborate with so many brilliant people to make the funniest show possible. The show is also just so unique in that it’s designed by and for black women, and the energy of working on something like that was unlike anything else.


Speaking of A Black Lady Sketch Show, congrats on your Emmy nomination for Outstanding Picture Editing For Variety Programming! How does it feel to be a nominee along with the other members of your all-female editing team? It’s been over a month since they made the announcement and I honestly still feel like I haven’t fully processed it. This is the first time I’ve ever been a part of an entirely women and nonbinary post team, and that experience in itself was incredible. And now, to be nominated with these 2 super talented women is a really wonderful feeling. We are also the first all-WOC editing team to ever be nominated, and I think that for all of us, our biggest hope is that the increased visibility due to our nomination can maybe show others (especially aspiring WOC editors) hoping to get into the industry that this is a career option and that there are in fact, other people who look like them out here. Most of all, I’m just extremely humbled and grateful for this recognition!

How do you prep before a big project? I’m a huge believer that the more you know about a topic, the better you can put together a story about it. Usually, before a new project, I’ll delve into research about the topic or issues presented within it so that I can get my mind into the right place. I’ll watch as much content in that type of genre as I can so that I can get into that style and pacing. Sometimes I’ll make playlists with different songs or scores that feel tonally like what the project is trying to achieve. I’ll brainstorm about what effects I might need on the project or visual looks I want to achieve once I get started. And then I hit the ground running!

What’s a keyboard shortcut you can’t live without? ‘Select all right’ (mapped to F8 in my Avid settings)!

How do you keep yourself fueled/your favorite snack when you’re in an epic session? Just call me “Cheez-it” Filo™ over here.

Where do you turn for creative inspiration? I watch a LOT of TV and movies, in all the genres I can find. Absorbing new content always inspires me. Also, just listening to music, reading, or spending time in nature helps. Sometimes I’ll pick up random hobbies like knitting or embroidery, just something to keep my mind occupied in different ways and I feel like in doing that your brain is able to process the world around you.

What do you do when you start feeling creative burnout? I’ve never fully mastered this one, so if you figure it out, please let me know! There’s a lot to be said for stepping away from your computer and walking around. If I go for a long walk with my headphones and music, my brain can almost always work out what it’s trying to figure out. During quarantine, I’ve also discovered the value of a lunch hour bath. It sounds pretty unconventional, but it is a really good way to switch your brain off for a few.

What’s your favorite film and/or TV series? I have so many, so this question is almost impossible! Some of my favorite TV shows that I’ve watched recently are Hacks, Mare of Easttown, The Righteous Gemstones, and High on the Hog Some of my favorite films are Se7en, The Shining, Silence of the Lambs, High Tension, Eye of the Beholder, Fight Club, and the list goes on and on. My all-time favorite film is a Japanese movie called Suicide Club. It’s a really bizarre film, but the director Sion Sono was a performance artist and activist who evolved his work into film and I think it’s a really interesting and unique film for that reason.

If you could collaborate with any director/producer/editor/etc. living or dead, who would it be and why? I’ve been lucky to work with some absolutely incredible artists, including a couple of dream ones. Working with Sam Esmail and his whole team was a dream experience for me. His team is not only SO wildly talented but really amazing at bringing out some of your own best work that you didn’t even know was in there. The entire A Black Lady Sketch Show team is just so skilled at what they do and hilarious and a dream to work with. I really love sitting in sessions with them and collaborating/laughing with them! Kirk Baxter and Angus Wall are the editors who inspired me to become an editor in the first place so it would be a dream to meet or work with them in some capacity. I absolutely love Elísabet Ronaldsdottir’s editing as well. As an activist, Sion Sono, who I mentioned before, is someone I would love to work with on something.

What career and/or life advice would you give your younger self? Stop. Breathe. You’re your own worst enemy.

You’re also on the board of the Girls Empowerment Sierra Leone organization and you co-founded End Ebola Now. Can you tell us why they are important to you, and how people can help? Absolutely! Sierra Leone is where my family is from and a place that I love more than anything in this world, so both of these organizations mean everything to me. Girls Empowerment Sierra Leone (GESL) is an organization I am on the board for that I am so proud of. GESL enhances the leadership skills of adolescent girls to become effective advocates and social change agents in their communities. It is a year-round program for girls 11-16 that offers workshops and support, where they learn leadership skills, advocacy, activism, and get involved in their communities. They do community advocacy projects throughout the year, and we have an Emergency Assistance Program to make sure that no girl is ever restricted from the education she deserves due to situations beyond her control. GESL started as a one-day summit with 9 girls in 2012, and since we started we have year-round programming and have been able to reach over 400 girls and their families.

End Ebola Now is a program that was built out of frustration and necessity. During the Ebola crisis in West Africa which started in 2014, a lot of misinformation was being spread, and accurate information was simply not reaching rural areas which were being hit the hardest. A group of Sierra Leonean diaspora and myself saw a need to spread as much accurate and current information as possible, and so End Ebola Now was born. There are 26 languages in Sierra Leone, so we basically created a PSA campaign and visual flyers within various languages to be able to reach as far as possible via radio, television, and regional channels. This campaign evolved into fundraising as well when we learned that, during all of the devastation, there was only one fully functioning hospital left in Sierra Leone (Emergency USA).

At this time, dancing had been banned in Sierra Leone because Ebola is so contagious that it also spreads through sweat (anyone who knows West African culture knows what a staple dancing is). We created a fundraising challenge called #ShakeEbolaOff which was a dance challenge to try to show people back home that the world was with them, but also to raise awareness and funds for Emergency USA.

To our surprise, Kevin Bacon and other celebrities joined in on the challenge and really helped to push the platform further than we could have imagined and really helped to ensure funds directly reached Emergency USA’s hospital in Sierra Leone. The West African Ebola crisis ended in 2016 thankfully, but other outbreaks have happened since then in Congo, and again in Guinea. Learn how to contribute and head to emergencyusa.org to find information about their various amazing hospitals around the world and their programs!