By Brady Betzel for PostPerspective

Most people working in modern post production have heard about “tracking.” Many may have even dabbled in a little tracking to remove a dead pixel, do some simple sign replacements or stabilize a shaky shot. If you are lucky enough to have been successful in your standard Avid tracker or the amazing Adobe After Effects 3D Camera Solver then you will love what Imagineer System’s is doing with mocha Pro 4.1 and mocha Plus 4.1.

If you haven’t touched a tracker and/or are scared, I don’t blame you; it’s not necessarily a painless procedure (especially if you don’t have great source footage), but stick with it becausethe results of a great track, along with some creative motion graphics creativity, can bemind bending. After reading this review go check out the mocha Fundamentals series ofvideos.Those will get you started relatively quickly.

For this review ofImagineer Systems’ mocha Pro 4.1 and mocha Plus 4.1 I will touch on a few of the latest advances in planar tracking software as well as share some tips that may get you started and working faster. 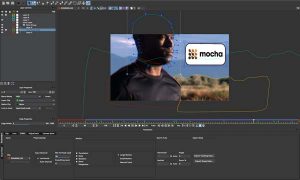 What is planar tracking (or what ISN’T planar tracking)? Planar tracking is not a single point tracker, which is probably what most editors are used to. Point trackers follow one or a couple of points selected by the user within a small search area. Planar trackers, such as mocha Pro, use very wide search areas that constantly calculate where the object specified is in relation to the previous and the next frame of video. Unlike most point trackers, planar trackers can have part of the track go off screen while continuing to hold their track (a very handy feature). If the last few sentences threw you off a little, don’t fear it gets easier and more fun — just stay with me.

What are trackers typically used for? As an editor, I use trackers for stabilizing footage, replacing signs on buildings, removing (rotoscoping) production gear from a shot or even replacing someone’s eyes with a scary set of red monster eyes from, let’s say, Rampant Design Tools Monster Toolkit! Anytime you need to add something to a scene (text, objects, etc.) while retaining natural camera shake and movement, you will most likely use some sort of tracking software.

I first heard of mocha a few years ago when it came bundled with After Effects. I have to admit I was intimidated because it sounded like an entire new piece of software I had to learn, and since I was still trying to get comfortable inside of After Effects I stayed within AE using the built-in tracker and now the 3D camera solver — but that was a mistake. mocha is not as difficult to use as you might think. In fact I would argue it’s easier to use (and more accurate) than most other trackers you may have used inside of an NLE or VFX software… once you understand how to use it.

mocha Pro 4.1 To test out mocha Pro 4.1’s features I went towww.dissolve.comand downloaded their free stock footage clips of the month. (If you haven’t signed up, head over to theirsitenow and check back monthly for three royalty free, zero cost, HD stock footage clips per month — they work great for testing out products or even using in your own work.) 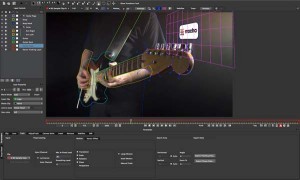 I found a shot that was tricky to track with a point tracker because it had a rack focus and would lose its way once the focus started to shift. I brought the shot into Mocha Pro 4.1, which is a stand-alone program. mocha does a great job at matching the project specs to the clip you import, just be sure to double check because you don’t want to do all that roto work at an HD resolution when you should be working at 4K, or working at 23.976 when you should be working at 59.94 fps. That will not end well.

Once inside of mocha Pro 4.1, I immediately went to the frame that contained the most surface area of the object that I wanted to track. I grabbed my X-Spline tool and drew a closed spline around the front edge of a glass table — it had the most contrast even when blurred or reflected on. Then I pressed the track backwards and track forwards buttons and proceeded to track backwards to the first frame of video. Success! Then I tracked from where I began, forwards to the end frame. Unfortunately I lost my track pretty quickly. I adjusted my Min % Pixels Used Up to about 30 percent, which in turn causes the track to take longer but can sometimes solve sticky situations by upping the pixels used to calculate your tracking data. Luckily for me it worked this time for most of the track. I had to go back and manually adjust a few frames where a reflection caused my track to jump around, but for the most part mocha Pro 4.1 stuck to what I wanted and adjusting after the fact is not hard at all. 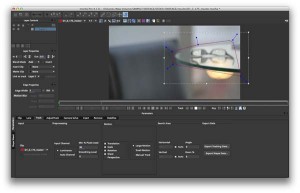 Back inside After Effects CC 2014 I needed to apply my mocha data to the object I wanted to track with the glass table. To do so properly you have to fit the image/object you are inserting to the After Effects projects dimensions — precompose and move all attributes, open the new precomp, click on the layer you want to eventually insert in the scene and in the menu click Layer > Transform > Fit to Comp, then go back to the original comp and paste the tracking data to the precomp. There are alternate ways to get this to work but I find this way is what works for me.

Check out thislinkfor specific ways to export tracking data to After Effects. If you are inside of a program with Boris FX: Boris Continuum Complete Plugin Suite, you simply apply the BCC effect with tracker capabilities such as BCC Corner Pin or BCC Witness Protection, go to the Motion Tracker twirl down menu, click Tracker Data Import/Export and Tracker Data: Load.

What else can mocha Pro do? I’m glad you asked! mocha Pro is not only a great planar tracker, it also has some truly magical abilities when you look behind the green curtain with its object Removal Module. This process allows you to remove an object (like a stop sign) from a piece of footage without having to painstakingly rotoscope each frame. It does need to have a pretty stellar piece of footage to work correctly, but when it does work it’s really amazing.

In very simple terms this is how mocha Pro 4.1’s Object Removal Module works: 1. Identify your foreground and background planes 2. Track and Roto your foreground elements (that you want to remove) 3. Organize your Mocha layers so that the objects closer to camera are on top. 4. Track your background plane (or planes if you have multiple planes) 5. Select the layer you want to remove and adjust any parameters 6. Render

This is an oversimplification but with lots of practice and a few attempts this can save you in a pinch. Especially if roto work gets your buffers boiling.

If you haven’t updated to mocha Pro 4 yet, there have been some significant advances in that major update as well, such as stereoscopic 3D workflow for planar tracking and roto work, customizable keyboard shortcuts (THANK YOU!), in addition to opening up compatibility with many common software toolsets.

What’s the difference in mocha Pro and mocha Plus? mocha Pro 4.1 is the whole enchilada. It is the stand-alone planar tracker software with added ability for object removal, 3D tracking and stabilization, as well as ability to export tracking data for standard industry software such as After Effects 2014 CC, Nuke, Flame, Cinema 4D, Blackmagic’s new version of Fusion and many more.

For us working in facilities, the added ability to use this as a floating license is also particularly useful when jumping around workstations. mocha Pro 4.1 totals $1,495 for a full license or $795 for an upgrade. While it’s not cheap, it is worth every penny in my experience, at the very least saving you hours of work and hours of headaches.

mocha Plus 4.1 (formerly named mocha AE V.3) is the upgraded version of mocha AE CC, which comes bundled free with After Effects CC. It builds on the bundled Mocha AE CC by adding functionality such as a 3D Camera Solver (for AE only), Lens Distortion, Export Lens Distortion Maps (for AE only), Open Spline support (AE only), and compatibility for other apps such as Premiere Pro, Apple Motion, Final Cut Pro 7 and even plug-ins such as BorisFX Boris Continuum Complete. That last bit in particular saves us Avid Media Composer users a tremendous amount of money if you don’t gave a need for the full Mocha Pro feature set. Mocha Plus 4.1 cost $245 for a full license, and $195 for an upgrade.

If you find yourself using GoPro cameras with heavy lens distortion or some unique lenses with heavy distortion, this upgrade will save you tons of time and problems when accounting for those shifts, not to mention Open Spline support.

Summing Up In the end, I’ve only touched the surface of the powerful features inside of Mocha Pro 4.1. The only real way to feel the power for yourself is to download mocha Pro 4.1 or mocha Plus 4.1 for yourself and use their fully functioning 15-daytrial.

If you ever do any sort of object removal, rotoscoping or tracking you will immediately see why you need to add mocha Pro 4.1 to your toolset. If you don’t need all the bells and whistles but still want the power of Open Spline support for After Effects, save yourself some money and grab mocha Plus 4.1. For someone like me who loves to make their work stand out by adding that little extra magic to their motion graphics (like adjusting keyframes within the graph editor inside of After Effects), mocha Pro 4.1 is one of those tools that adds the pro polish to any project.

Brady Betzel is an editor atBunim Murray Productions, a reality television production company. He is currently editing The Real World, and is one of the editors onBad Girls Club. His typical tools at work areAvid Symphony, Adobe After Effects CC and Adobe Photoshop CC.You can email Brady atbradybetzel@gmail.com, and follow him on Twitter,@allbetzroff.