MANUFACTURER: Boris FX
PRODUCT: BCC9 for Avid Media Composer (also supports Symphony, Newscutter, Adobe After Effects and Premiere, Sony Vegas Pro and Quantel)
PRICE: $1,995 new; $599 upgrade
WEBSITE: www.borisfx.com
- Dynamic new FX Browser previews effects
- Enhanced pan and zoom
- Tons of new drop-on transitions
Boris Continuum has had a unique relationship with Avid and Media Composer since 2005, when BCC was first bundled with Media Composer, giving it an advantage over other filter sets, and allowing it to become the de facto third-party effects package for Avid editors for many years. Since then, a number of competitors have followed, creating a cat & mouse game with features, effects and usability constantly evolving. While the argument of who gives the best bang for the buck is debatable, in my opinion, this release of BCC9 represents a light-speed jump for the BCC line and a boon for editors and compositors alike, including some features ahead of the curve from other products. It's also important to note that BCC isn't just an effects package – it also has a powerful suite of other tools from titling to keying… There's a lot under the hood.
(I should note that since BCC is no longer bundled with Media Composer, the question of which filters package gives you the best bang for the buck becomes even more important. BCC9 has a ton going for it.)
NEW FEATURES
With BCC9 newly retooled for both speed and operability, I'll go through improvements and new features in depth, but a cursory glance shows a new emphasis towards greater use of realtime (aka: Green Dot) effects — a growing trend with most filter effects companies; a welcome new (and slightly overdue) dynamic effects browser with a multitude of options; a slew of new transition effects (all with presets and newer effects); new image restoration capabilities, including a great new lens corrector for use with the newer wide angle GoPro style cameras; an improved vignetting filter that will add a certain amount of in-vogue peripheral distortion; and major new improvements throughout.

BCC9 adds Open CL and CUDA acceleration (in addition to the existing OpenGL) for faster rendering and visualization times. The powerful Pan and Zoom filter now has increased capabilities, including 3D and Vignetting. All the old tools are still included (some relegated to the Obsolete section... which simply means there are newer effects that replace these earlier iterations.) The particle generator, optical flow options, text generator and other familiar tools are still included, making BCC9 a truly value-added tools for editors.
BCC9 is broken down into 17 specialized groups, some of which include Transitions, Film, Image Restoration and Stylize.
BROWSING MADE EASY
Before delving into these groups, perhaps the brightest and most welcome feature is the previously mentioned all-new FX Browser. You preview without committing to the effect by just clicking your cursor on any of the multitudes of selections and see the results in the main window. (I'd like to see hovering action instead of clicking implemented. It's just easier.) The three windows of Preset, Preview and History are resizable — a nice touch — as is the ability to save your configurations into different workspaces. Needless to say, any preset you modify is easily saved and named for future use, showing up in the preset window. (Hint: name it something unique to speed up your search as the visual window fills up really quickly.) Flexibility is key.
Another thoughtful feature is that a history of effects is created below the viewing window with each new effect click, so you don't have to remember which of the myriad presets you've clicked on. BCC9 incorporates a compare mode in the viewer screen offering either a split screen showing filtered and unfiltered sides or smaller side-by-side boxes .I prefer the split screen for more immediate feedback. Also handy is the ability to pick the type of background you want to see the effects laid over — black, background or checkerboard. You say you want more presets? Over 2,000 professionally-designed presets are included in BCC9. 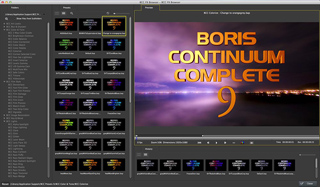 A text search window allows you to use keywords to search out certain presets. Also handy is the ability to select between thumbnail and list view — an easy way to select more populated preset pages (in addition to selecting between BCC's static and animated presets.) Another nifty addition is the ability to bring the FX browser's main screen full frame by clicking on it and hitting the tilde key. (Thanks to the prolific and legendary Kevin McAuiliffe for this observation. Kevin's tutorials on behalf of Boris and other products are incomparable.)
A motion control bar beneath the preview windows allows you to preview the effect frame by frame or in realtime a la a ram buffer. Range of play can also be selected by marking in and out points in the control bar. (I should note here that BCC is a real memory hog. I had skittish playback at 4 and even 8 gigs on a Mac Pro. I recommend 12 gigs minimum and a pretty fast graphics board.)
Thoughtfully, BCC incorporates a multiple resolution selector that allows you to choose full or lower resolutions to view these previews.
For anyone used to using other effects package browsers, the territory is familiar: The left side is populated by thumbnails (resizable and scrollable), very handy to see more subtle filters, listed in alphabetical order of the preset name showing the effect on the selected video layer on the timeline.
One nice feature is that upon opening the browser to whichever effect you want to look at, BCC will default to the last selection you used. This is very handy on brain-drained all-nighters.
STANDALONE FX BROWSER
In addition, the new browser can also be used alone in a mode that allows you to scan the entire FX library — all of it — at once. The main drawback is once finding the preset you like in this mode, you have to return to the normal browser to apply it — an extremely fast and transparent operation. All in all the browser is the crowning achievement in BCC 9.
GLISTENS AND GLOWS AND  BLURS — OH MY!
Next in line are the revamped Transitions. Relatively new to the BCC schema, Boris has been pretty busy implementing more and more of these invaluable effects. It wasn't always BCC's strong point, with very few drop-on transitions that didn't require valuable time and requiring multiple layers to achieve results.  Now BCC's risen to the occasion with over 22 new transitions that include damaged film, light effects, vignetting, flutter cuts, and my favorite, the old dream sequence fave: water waves dissolve (cue the string section). There are glow dissolves, flare transitions and lots of new eye candy. All in all, there's about three times the amount of transitions than were in BCC8.
Thankfully, there's not too much need to keyframe transitions — another timesaver. There's an almost infinite ability to customize all parameters using color-coded on-screen overlay adjustment curves — it can be a little daunting… So many variables, so little time! For example, there's dozens of sliders just in the Damaged TV Dissolve preset alone. You could spend hours figuring out what to vary — but where's horizontal hold, guys? Bring back horizontal hold!
CHROMAKEY STUDIO — HOW SUITE IT IS!

A new addition to Boris' image processing tools will be a major boon to BCC's greenscreen keying suite, now called Chromakey Studio. This implementation puts a multitude of tools previously requiring layering under one filter. This includes masking, color correcting, garbage masking, and many other image-enhancement/correction tools. A vast improvement and major time-saver
PICTURE PERFECT
A whole other revamped area is in the Image Restoration group — oldies such as Uprez, Flicker and Noise Reduction are still in the family, but the new Magic Sharp appears to bring back original sharpness lost because of shooting conditions, fast motion and other camera induced artifacts. (I'm usually a bit skeptical of sharpening algorithms, but Magic Sharp really does appear to put some detail back in without looking over enhanced.) The other terrific filter in this group is the drop on Lens Corrector that will instantaneously remove barrel distortion from GoPro and other HD personal cameras. It works in a flash and has a wide range of correction.

GETTING ROUGHED UP
The clean look has been taking a backseat to edgier and grungier looks in production today — especially in graphics, and that's no exception with entries in the revamped stylize group. BCC Grunge will dirty up (in a good way) text and other imagery. It'll erode edges and it'll even allow you to add your own custom textures to treat video. The variables are voluminous-shakes, dust, scratches, bumps, erosions, flicker, blurs, orbs, glows, scanlines, spotlight, grain, vignette, chromatic aberration…Whew! The ability to get down and dirty is endless.
FINAL THOUGHTS
There is much more going on in this dynamic new release — too much to include here. From a new Laser Beam addition in the Lights group to 2 Strip Technicolor film emulation (evoking early Hollywood) in the Film group, an overhauled help systems and general tweaking in many other performance areas, this is a major release well beyond the definition of an upgrade, and well worth looking at. BCC9 has forced this editor to take a new look at an old, sometimes unrealized workhorse in a new light.