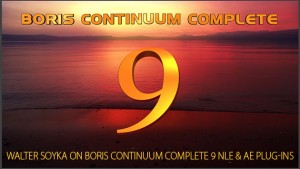 Boris FX released a new version of Boris Continuum Complete 9 back in June 2014, for Adobe After Effects and Premiere Pro, and added Blackmagic Design's DaVinci Resolve and Apple FCP X support in October.
There are about a zillion other plug-ins available for these applications, and at $995 for After Effects and Premiere, $1,995 for Avid, $695 for Apple FCP X and Motion, $695 for Resolve, and $695 for Sony Vegas, BCC 9 is a bit pricey. Is BCC 9 worth it?

I've been a casual Boris FX user for years, using a handful of effects from time to time, according to very specific needs, but not using BCC effects on a daily basis. When I started researching this review, I decided to explore the whole set in a lot more depth.
I've used BCC effects whenever possible on every real-world project I've done in the last couple months, so what follows is not a list of the shiny new features on the tin (but I will get to those), but rather what really mattered to me as I was integrating BCC 9 into my workflow.

The BCC effect set is huge. With over 200 effects in 17 categories, there's a little something for everyone.
That 200+ number is daunting, but it's a mix of some very general low-level effects and some very specific high-level ones. For example, there are separate plug-ins for rain and snow, both of which are based on a particle system. While that may seem like a way to puff up the plug-in count, a little use shows that's not the case at all. Rain and snow behave very differently in the real world, and BCC Rain and BCC Snow accordingly have different user controls. If you have need for one or the other, getting the look down with these tightly-focused effects is a lot faster than starting with a generalized particle system and tweaking it to perfection.
On the downside, I'd have to say that not every effect is the set is best-in-class, but I think that's to be expected when comparing a general-purpose set of effects like BCC to individual, highly specialized effects.
That said, I was surprised at how competitive some of these effects are. BCC Particle Array 3D, for example, has a lot of the advanced functionality that Trapcode Form does, and BCC 3 Way Color Grade covers a lot of the same ground that Red Giant Colorista II does.
Finally, a good number of these effects seem at first blush to be redundant with a host like After Effects - but look a little closer. AE's Gaussian Blur has 2 controls; BCC Gaussian Blur has more than a dozen. BCC offers a high degree of control that can make it faster and easier to get the look you want than building it from scratch with a stack of native tools.
QUALITY

Good-looking renders used to be a differentiator for good plug-ins, but now it is a baseline expectation of any effect. BCC 9 does not disappoint.
On a more technical note, it's worth noting that nearly every BCC 9 effect is capable of 32-bit floating point processing. I do a lot of design work in floating point, so this is critical for me.
UNIQUE BORIS FX FEATURES

As a prior casual user, I would often just throw a Boris effect on, tweak a couple controls, and call it a day. You can certainly use BCC that way - but if you do, you will miss some of the things that make BCC really special.
Now that I've been using BCC a lot more, I've learned that BCC is more than just a pile of plug-ins. It's a cohesive system, with many common controls and a few unique features that can really speed up your workflow.
BCC is cross-platform and cross-host. I'm discussing the Adobe version here, but BCC also runs in Apple Final Cut Pro X and Motion, Avid Media Composer, Blackmagic Design DaVinci Resolve, and Sony Vegas. If you regularly use a couple of different applications and buy BCC licenses for each, this means that once you get comfortable with the Boris toolset, you can transfer that knowledge across applications. Rather than learning the ins and outs of similar-but-different native effects in different applications, you can learn Boris and use it everywhere.

Every effect in BCC has the ability to load and save presets, and these presets are compatible with other BCC 9 packages across platforms and hosts. That means that not only is your general knowledge transferable across applications, but specific effects and looks are, too.
BCC 9 is broad and deep, but wherever possible, the effects use similar terminology, consistent design, and common controls. Here are some of those common controls, shared across many effects:

BCC Apply Mode. This allows you to blend the rendered effect with the original image. It gives you a choice of blend modes, giving you some really creative ways to mix the effect back into the image without creating additional layers in the composite.
BCC Beat Reactor. Beat Reactor lets you drive the parameters of an effect from a sampled audio file. It shows you an on-screen spectrum graph and lets you visually define regions in which a given frequency will drive a specific output. This makes sound-reactive effects a snap.
BCC Compare Mode. Compare Mode is a set of controls that allow you to compare the post-effects rendered image with the original, pre-effects image. You can compare side-by-side, with a split-screen slider, with the layers below, or with an arbitrary layer from the timeline.
BCC Motion Tracker. Many effects include a built-in motion tracker, so you can have your effects follow specific objects in the scene.

There are a few unique effects in the set that are almost worth the price of admission on their own.
BCC Motion Key is worth a look. It lets you easily remove moving objects from a shot, like someone walking through your wide shot or the mic boom swinging through the frame. Without BCC Motion Key, you're left with rotoscoping or trying to clean up a difference-blended plate.
BCC Magic Sharp is a nice sharpening tool that doesn't accentuate artifacts as dramatically as standard sharpening algorithms, and works nicely for making a slightly soft-focus shot just a bit crisper, or for subtly enhancing detail in enlarged footage.
The BCC 9 3D Objects set is very useful, providing fast GPU-accelerated extrusions for native splines and text as well as EPS vector files, and for manipulating layers in 3D space.

BCC Grunge surprised me. It's a good way to add some grit and texture to an image, quickly.
For Premiere users: I found the Transitions set to be a nice extension to the basic built-in transitions. Beat Reactor and Motion Tracking are worth calling out again here; using these features in Premiere can save you a trip to After Effects.
INSTALLATION, LICENSING AND ACTIVATION

Adobe Creative Cloud has changed the way we license applications a bit. With CC, the license is tied to the user, not the machine, and a user can install the software on as many computers as they want and freely move their license around over those different systems.
Boris FX allows similar licensing. BCC 9's installation is separate from its activation. You can activate one installation at a time, and there is no limit to the number of times you can transfer the license from one machine to another. Simply de-activate BCC 9 on one system, then activate it on the next.
I personally use a few different systems: my main workstation in the office, my Surface Pro 2 tablet, a laptop, and a travel workstation. I moved my Boris FX license around among all these machines without any incident.
One note worth mentioning: while Adobe lets you activate the same license of Creative Cloud on a Mac or a PC, BCC 9 licenses are platform-specific. They are also host-specific, with separate licenses for Adobe AE/Pr, Apple FCPX/Motion, Avid MC, Resolve, and Sony Vegas. Cross-grade pricing is available.
NEW IN BCC 9

For anyone who is already a BCC customer, here's a breakdown of the new features in BCC 9:
First, the BCC FX Browser . This is a GUI that you can launch from your host application to preview effects and presets in context. You can audition effects and presets over your own motion video to quickly get a sense of what works and what doesn't. I didn't find myself using this from AE very much, but it was nice to have in Premiere.

Transition curve overlays are a clever new features for BCC 9, too. They are on-screen controls that you can manipulate to govern how a transition eases in and out:

The Grunge and Edge Grunge effects I mentioned above are new, and BCC 9 adds 30 new transitions .
CONCLUSION

Is BCC 9 a good value? I think so. It's been useful enough to us at my little studio that we've bought a second license.
Some of the simplest and best business advice I've ever heard is to buy things that make you money. BCC 9 has been doing that for us. Every time we use a BCC effect, we save a little time over building the look by hand with native tools. That means more iteration on design, leading to better results; it means faster turnaround to the client; it means getting home for dinner.
Boris Continuum Complete 9 does what I think a good plug-in should: it adds new functionality to its host application, and it makes work faster and easier. It's very useful and covers a lot of ground.

BCC 9 is a comprehensive set of effects. It includes over 200 effects in 17 categories: