Aaron Benitez tests mocha Pro v3 to see how Imagineer Systems allows you to “Track Like a Boss.” VFX/motion graphic artist Aaron Benitez reviewsmocha Pro v3,released earlier this year at NAB. The new version includes new Rotoscoping Tools, new Layer Management, Project Management, 3D Camera Solver and Dopesheet, as well as keyboard shortcuts and interface improvements designed to enhance the entire Planar Tracking-based workflow for tracking, roto, removal and more. With seven years of Adobe After Effects behind me, I realized that I also had mocha on my computer. After using After Effects and PFTrack for all of my motion tracking, I was astonished by the capabilities found in mocha’s planar tracker. Motion blur, false positives, and lens distortion were no longer the excruciatingly tedious tasks I once dreaded.

When motion tracking shots requiring 2D and 3D matchmoving I would often come across shots that either worked, or did not work. As a VFX artist, I would bring in the background plate to be tracked, enter the lens data, hit “feature track,” and let PFtrack try to come up with a solution. When it worked, it worked well, and when it didn't, it was often easier to move to a manual solution involving frame-by-frame removal of false positives. Moving objects, tracking points running off screen, and crossing intersections often involve hours of required manipulation in order for 3D motion trackers to render an accurate matchmove. This is akin to an engineer or architect spending two hours daily, per job, telling construction workers what not to do when in reality a competent construction worker doesn't need such reminders. This is what makes mocha such an outstanding solution and time-saver: the fact that I only have to tell mocha what to do, rather than wasting time telling it what not to do. 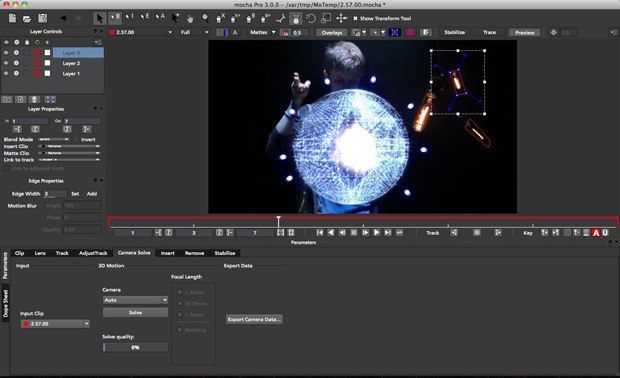 I have recently uncovered a few overlooked options in mocha which I have found to be helpful. First, it’s important when using mocha to understand what your tracker is doing because it's so different than most other programs. One distinction is that you can control whether the spline is attached to the actual track. This means that the position of your spline isn't necessarily associated with the tracking data mocha is recording. For example: I was tracking a line of bushes in a shot the other day where sections of the bush row were constantly moving off screen. Rather than moving the position of my spline every couple of frames as it followed the bushes off screen, I was able to “unlink” the spline from the track, which told mocha to provide tracking data from a specific portion of the frame the entire time. Another noteworthy feature is that you can move your spline and continue tracking without ruining your tracking data. As long as your track is gathering tracking data from the same planar surface, you can move your spline to any area of the screen in order to avoid what are often hair-splitting obstacles such as intersecting objects, changes in lighting, and change in focus. 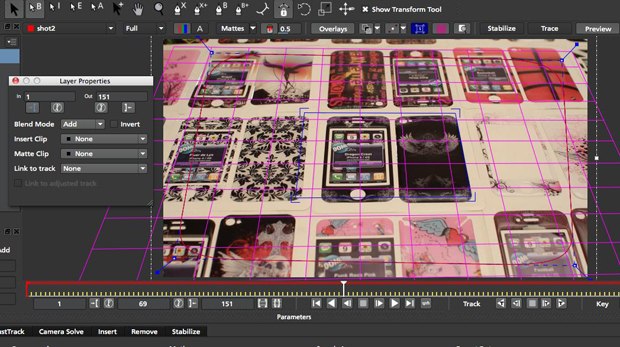 Tracking a planar surface as it moves off screen with an unlinked spline.

It bewilders me that after seven years of using After Effects, it wasn't until last year that I had even heard of mocha and further still, after noticing it already installed on my computer, it took me a few additional months to dig into it. While I could sum this up as having been too busy, the truth is that we are creatures of habit or perhaps I would have quickly embraced the prospect of making my work easier by learning this “new” tool. I typically don’t want to learn a new program unless I really feel it’s going to benefit my work quality or speed. As an After Effects user, two things have dramatically changed the quality and speed at which I work over the last year: one of these is mocha, and the other is expressions. While the mocha to After Effects workflow does take some getting used to (and my wish list would include having mocha's short keys default to those of After Effects), the time invested in learning mocha has been worth its weight in gold.

Imagineer’s mocha offers the ability to achieve match moves unlike any other software I’ve used due to its use of planar tracking. While it isn’t made to replace a 3D matchmoving solver like boujou or PFtrack, the latest release, mocha Pro v3, provides interesting new features that have helped me get out of a few jams. While supervising a music video we needed to composite dozens of shots that required a 3D matchmove but we only had 2-6 reference points for the solve. To make things even more difficult, these reference points were light bulbs that were continuously changing in brightness, making it nearly impossible to track with any point tracker. Initially I had hoped to track this in PFtrack, but PFtrack requires more than 20 points at any given time to create a solve, even manual tracking wasn’t an option. After Effects CS6 included a just released 3D camera tracker, but because the lights were constantly changing in intensity none of the trackers were able to stick for as long as was needed to provide a sufficient track. I was ready to just eyeball the shots when I came across mocha’s new 3D camera solver in mocha Pro v3. While I wasn’t able to solve for a 3D move with the lack of any vivid planar surfaces, I was able to use two to three position tracks to solve for a nodal pan camera move that I was able to import directly into After Effects and effectively fake a 3D move. 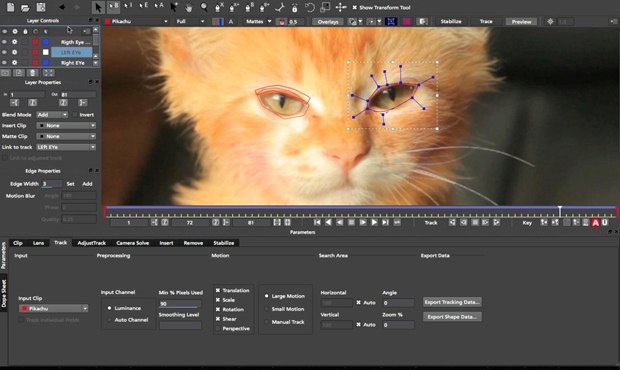 Using mocha to track a warping surface.
Recently, I was commissioned to do VFX on a commercial making animals talk. I had attempted this effect several years back but ran into huge issues with the tracking and was not pleased with my results. I knew that in order to achieve what I wanted, I would need to use real plates of the animals opening their mouths and manipulate it in way that would make them look like they were saying real words. Further, I realized that the effect would require tracking a base plate of the animal staying relatively still with its mouth closed and another plate of the animals opening their mouths. Two challenges arise when tracking the animal’s face that would have proven near impossible without the use of planar tracking in mocha. First, the fuzzy nature of animal fur does not provide high points of contrast that are trackable with the point tracker like the one you find in After Effects. Instead, mocha’s planar track, tracks the entire pattern at giving me a near perfect track of both plates. Second, accurately matching the meshing and distortion resulting from the opening and closing of the kitten's mouth was facilitated through the use of shear tracking data offered in mocha allowing me to mask out the kitten's meow with an accurate matte.

Imagineer Systems made some big strides by approaching tracking/matchmoving in a new and exciting way. The speed and accuracy at which mocha can improve tracking and rotoscoping makes it a stand out: for both its feature set and the price point — free with After Effects ($795upgrade to mocha Pro). I can see this being amust havefor all studios and freelancers needing tracking or rotoscoping with quick turnarounds and solid results. -- Aaron Benitez has several years of experience working in the film industry as a music video director and VFX/motion graphic artist.Aaron, also known as the VFX Bro, has worked with high-profile companies such as Disney, Hollywood Records, Gym Class Heroes and Far East Movement. Aaron recently launched a visual effects training websitehttps://twitter.com/vfxbrothat offers free andpurchasablevisual effects products, training, and presets primarily for After Effects and mocha. His tutorials and products have been used by millions VFX artists and featured in lyric videos for Carly Rae and Owl City