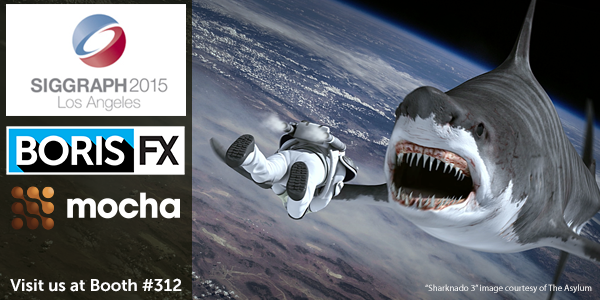 “Following the recent merger, there has been great enthusiasm from our user-base to have mocha ’s powerful tracking and masking technology available directly within BCC plug-ins and to have BCC effects integrated inside mocha Pro ”,   explains Ross Shain, Chief Marketing Officer of Boris FX / Imagineer Systems. “At SIGGRAPH we will preview the work of our combined development teams who are now sharing these technologies to introduce new workflows for visual effects, image restoration, and digital beauty work.” Continues Shain , “We are especially excited by this year’s lineup of guest presenters in our booth. SIGGRAPH is the ideal place to see professional VFX artists and animators present examples of their work from feature films and television and to learn from the pros.”

Attendees visiting Boris FX / Imagineer Systems at SIGGRAPH will have the opportunity to preview the following new products:

mocha is the award-winning planar tracking and roto-masking software developed by Imagineer Systems. The upcoming mocha Pro 5 release will add a new effects panel for integrated keying, grain, sharpening, and skin smoothing; new Python scripting support, and the ability to launch mocha Pro as a plug-in from host applications such as Avid Media Composer, Adobe After Effects, and more.

Boris FX is a leading developer of VFX, compositing, titling, video editing, and workflow tools for broadcast, post-production, and film professionals. Boris FX products have grown to serve over a million artists worldwide. The company's success lies in its ability to tightly integrate and leverage technologies through strong partnerships with Adobe, Apple, Autodesk, Avid, Blackmagic DaVinci Resolve, Grass Valley, Nexidia, Sony, and other leading developers of video editing software. Boris FX was founded in 1995 and is headquartered in Boston, MA, USA.