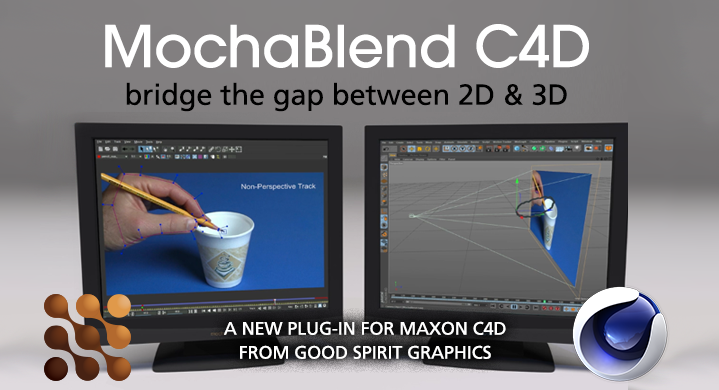 MochaBlend C4D is a plug-in that runs inside Maxon Cinema 4D and gives users the ability to import mocha’s 2D planar tracking data and roto-splines into a 3D solved workspace. This exciting new workflow can give amazingly quick results with a unique Single Plane Solver that takes the complexity out of traditional 3D camera tracking and match moving.

According to Good Spirit founder, Chris Barrett, the Imaginer team was quite responsive to supporting his efforts on this new workflow, “I approached Imagineer CEO John-Paul Smith at SIGGRAPH a few years ago to discuss my ideas.  I was fascinated by the possibility of creating new ways to convert 2D tracks from mocha into 3D motion inside applications like C4D. MochaBlend wouldn’t exist without the encouragement I received from the Imagineer team.”

The MochaBlend C4D plug-in was recently awarded “Best in Class” by 3D World Magazine. Reviewer Mike Griggs said, “MochaBlend is potentially game-changing, the plug-in offers a way to create objects which would otherwise take weeks” and “C4D motion graphics and particle systems can be added to a tracked null with a only couple of clicks.”

Watch a quick video of mochaBlend C4D in action!

Beyond the 2D to 3D tracking implementation,  MochaBlend C4D also introduces a new workflow to convert 2D roto-splines into 3D geometry with animated camera mapping. This workflow can be used for a variety of creative animation and effects purposes including 3D extrusions, particle simulations, and even 2D to 3D conversions.

While the product was in development, David Torno, the Technical Director of Ghost Town Media in Los Angeles took the software for a spin and created a compelling test project. First, David used mocha Pro to rotoscope footage of a woman running on a set. The mocha animated spline data was imported into C4D’s 3D space using MochaBlend and then extruded to drive a particle system. The ability to place 2D roto-splines into a 3D project and interact with C4D elements is a unique time saving solution for animators and technical directors.

MochaBlend C4D plug-in is now available for Windows or Mac OS-X for $250 USD.

The plug-in can be purchased on its own or included as a special upgrade for After Effects users who wish to upgrade the Adobe Creative Cloud bundled mocha AE to mocha Plus or mocha Pro.

MochaBlend C4D is developed by Good Spirit Graphics. Visit to learn about MochaBlend for Blender community and other products.