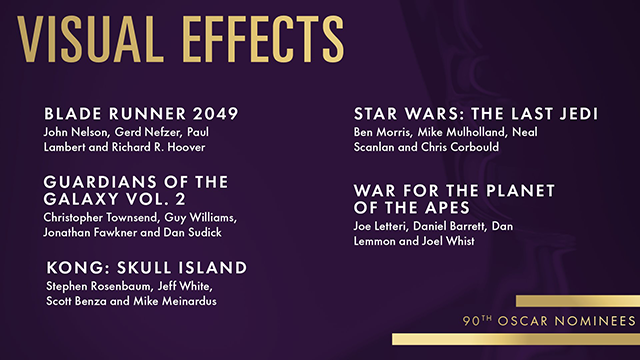 The Oscars countdown begins! Did you know that almost every feature film nominated for Best Visual Effects in the last 20 years used either Sapphire or Mocha software somewhere in the mix?

Whether it’s the invisible art of tracking and compositing, or more in your face lens flares and lighting zaps, the team at Boris FX is incredibly proud to be associated with the distinguished artists and VFX studios that worked on this year’s nominated films. Since their names are often overlooked, we’d like to acknowledge all the amazing work by our customers. And the nominees are…

Guardians of the Galaxy Vol. 2

War for the Planet of the Apes

Best of luck to all the nominees on Sunday, March 2nd!