The HyperZoom™ Technique Takes Flight with Mocha Pro & After Effects

Geoff Tompkinson is an award-winning time-lapse video producer and photographer. In 2014, he developed HyperZoom™, a cutting-edge technique that makes it possible to produce virtual timelapse flights, combining real-time, time-lapse, and hyperlapse into one seamless, continuous shot. The most unbelievable part of the technique? The footage is captured with just a camera, extreme wide angles, and a tripod - no drones, no cranes, and no motion control rigs! 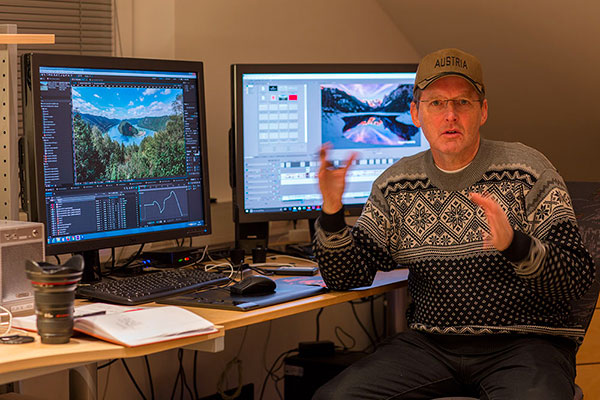 His footage can be seen regularly on TV and in major films. Clients include: Nike, National Geographic, Discovery, Disney, Leo Burnett, Twentieth Century Fox, the BBC, and many more.

Recently, Tompkinson completed Upper Austria “An Incredible Journey” for the Austrian Board of Tourism. The 8 month project is also a veritable love letter to his adopted home country.

“HyperZoom™ takes a lot longer to produce than a regular video. All the assembly is done in 3D space and there are no conventional cuts between one sequence and the next,” states Tompkinson. “This makes it very hard to change something once it is in the video. To remove a clip and replace it with another is no easy task. It’s a bit like comparing changing a single brick in a line of bricks (regular editing) - to removing a figure in the middle of a woven tapestry (HyperZoom™ editing).”

The HyperZoom™ technique by its nature often requires heavy rotoscoping and tracking to make shots work. “HyperZoom™ works by dividing any given scene into depth layers then reassembling those layers in their correct relative depth positions inside AE,” notes Tompkinson. “In this way the camera can fly around like a drone with correct 3D parallax shift between different parts of the scene.”

Tompkinson introduced the Mocha Pro plug-in into his Adobe After Effects CC workflow on this project. (He also uses Cinema 4D when working in true 3D is necessary.) “I knew I would be doing a lot of tracking and rotoscoping,” says Tompkinson. “Mocha Pro had the toolset to make this an easier task. It was used on eight shots and provided great benefits in terms of speed and completion of the job.” 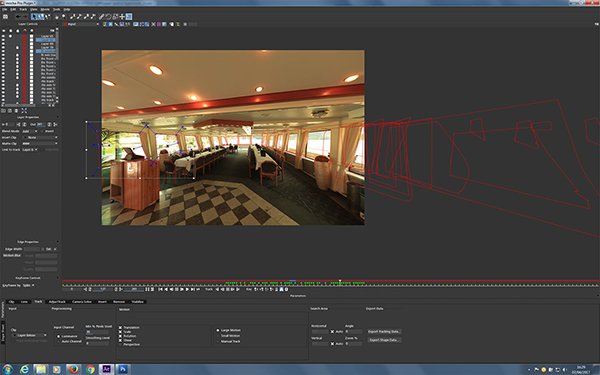 (Passage through Regina Danubia on the Danube, rotoscoping) 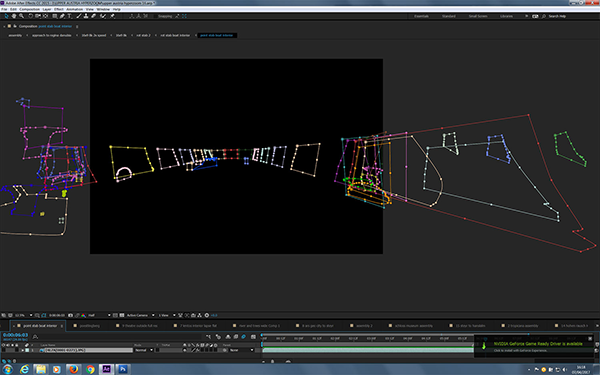 (Passage through Regina Danubia on the Danube, AE Masks)

In the hyperlapse sequence (above), Tompkinson had to remove all the windows inside the ship so that the exterior could be replaced with the same exterior that the camera would be flying into once it left the ship. It was shot with an extremely wide angle lens - resulting in windows that fly quickly towards and past the camera while drastically changing in size and shape due to wide angle lens distortion.

The addition of the Mocha Pro plug-in running inside Adobe brought a new workflow to Tompkinson. “I use Mocha to track and rotoscope things I need to mask,” comments Tompkinson. “Then I generate AE masks from the Mocha data so I can work with them in AE as usual. The ability to rapidly distort and accurately edit the mask on each new frame using Mocha made this laborious task more fun and much quicker than trying to do it with the standard AE masking toolset.”

In another sequence, the camera flies over the Totes Gebirger mountain range then onto the 5Fingers platform, which is full of tourists. To fly over the platform like a drone and head onwards to Halstatt (his adopted hometown), Tompkinson again turned to Mocha to rotoscope the entire platform as well as the moving tourists.

“Mocha Pro’s toolset is a great help,” says Tompkinson. “I don’t need to track and roto every day - but it has become the tool I turn to when I face those particular problems.”

“I work to produce the best result I can even if that requires much more work than I actually need to do in terms of satisfying the client. This is why I only accept commissions when I am inspired by the project and am sure that I can produce something to be proud of, ” ends Tompkinson. “Creativity can be a very frustrating process but its only by overcoming the difficult challenges and moving on that you can get better at what you do and have those moments of pure joy.”