Eric Jordan grew up loving everything futuristic — and it shows in his mesmerizing high-concept, technology-driven projects. “Science fiction and cyberpunk novels were a huge part of my life as a teenager,” says Jordan, an independent creative director, designer, and motion graphics artist. “It has definitely shaped my style and tends to influence the types of projects I take on.” 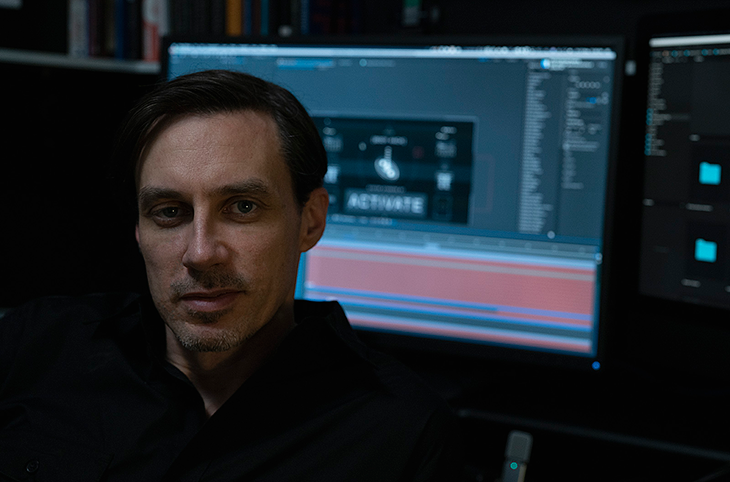 Jordan, who has been recognized as one of the top 20 international designers in the world by .net Magazine and previously ran a 35-person design company (2Advanced Studios) known for its high-end interactive work, made the switch to an independent artist in 2015. His career spans over 700 projects that run the gamut from film and broadcast to VR, electronic billboards, mobile, and video games. Top clients include Adobe, Google, Lucas Arts, Marvel, Nintendo, SpaceX, and Tesla.

“As I’m often working in a solo environment and handling everything from concept and design to animation/VFX, Sapphire helps me build static design comps right in After Effects that are ready to animate straight away if they are given the green light by the director,” states Jordan. “A static comp can look pretty lifeless but when you bring in certain Sapphire effects such as chroma distortion (S_WarpChroma), abstract light patterns (S_LightLeaks), hints of glints and shine (S_Glint), and finishing effects like vignettes (S_Vignettes), it really binds everything together and makes the frame look unified. That’s a professional touch that is often overlooked during early phases like concept and design. The finishing elements I add to design comps are easily tweaked and animated based on the feedback I get early on, which saves a huge amount of time versus comping everything out strictly in Photoshop. Almost all of the creative work now goes directly through After Effects.”

Jordan’s unique VFX work on the People’s Republic of Desire, a black mirror-style exposé on the world of Chinese live-streaming, helped the film win the Grand Jury Prize for Best Documentary Film at SXSW 2018. The film makes use of futuristic graphics, 3D, and augmented-reality infographics on a level rarely seen in documentaries. “Sapphire was utilized extensively to integrate a huge amount of lighting effects in the graphics segments such as glows (S_Glow), flickering lighting (S_Flicker), light glints and shines (S_Glint), and light flares and leaks (S_LenFlare and S_LightLeak),” notes Jordan. “Sapphire is my go-to tool of choice when it comes to adding finishing effects such as blurs/sharpening, chroma distortions, lighting, transitions, and damage.”

Sapphire’s versatility and broad range of effects allow Jordan to take his already highly creative and imaginative work to the next level. Among his favorite effects are S_WarpChroma to add a slight RBG distortion on top of complex layered sequences to give final composites a dream-like quality and the Kaleido series of effects. “I was invited by After Effects to create a series of high-tech, high-end customizable motion graphics templates for their Adobe Master Collection for Adobe Premiere Pro,” comments Jordan. “S_Kaleido, S_KaleidoPolar, and S_KaleidoRadial were utilized on top of 3D wireframe renders to create complex geometric tunnels, while S_Glow, S_Vignette, S_Blur, and S_Softfocus were used to finish off the scenes.”

“There’s a reason I continue to hold a loyal annual subscription year after year to a plugin suite like Sapphire. It’s a reliable and key component in just about all the diverse work that I produce,” continues Jordan. “Every project I discover some new method of integrating Sapphire to solve some challenge or issue with selling a shot at a professional level. I just can’t imagine my workflow without it.”

“I grew up making tiny films for fun on my father’s VHS camera, and I would use my creativity to introduce little effects. I am so lucky to be able to still hold onto that sense of play and to pursue creative work using effects that captivate the imagination,” ends Jordan. “Using Sapphire is a lot like having a box of advanced toys to play with and the fun is seeing where and how I can use the tools to bring a bit of beauty and joy to the world through the work I do.”