Red Dwarf: The Promised Land — the latest space adventure following the hilarious ragtag crew of cult British sci-fi TV fame — filmed in front of a live audience at Pinewood Studios over the course of two days. Unlike a typical live audience shoot, Red Dwarf was shot more like a multi-camera drama with ARRI Alexa cameras at 444 in Log C for a large number of visual effects shots.

Outpost Facilities tackled nearly 300 visual effects shots for the TV special. The post-production studio, conveniently located within the Pinewood lot, has perfected its live audience to post workflow. “Red Dwarf being shot with the live audience didn’t change our workflow too much. We do this often with a live feed and shared storage with the Pinewood TV studios,” says Robert Jamieson, VFX Artist. “We’ve become very efficient working from multi-cam feeds. The biggest challenge on Red Dwarf was the turnaround time as the volume of work was very high. We were still working on shots while the grading was happening.” 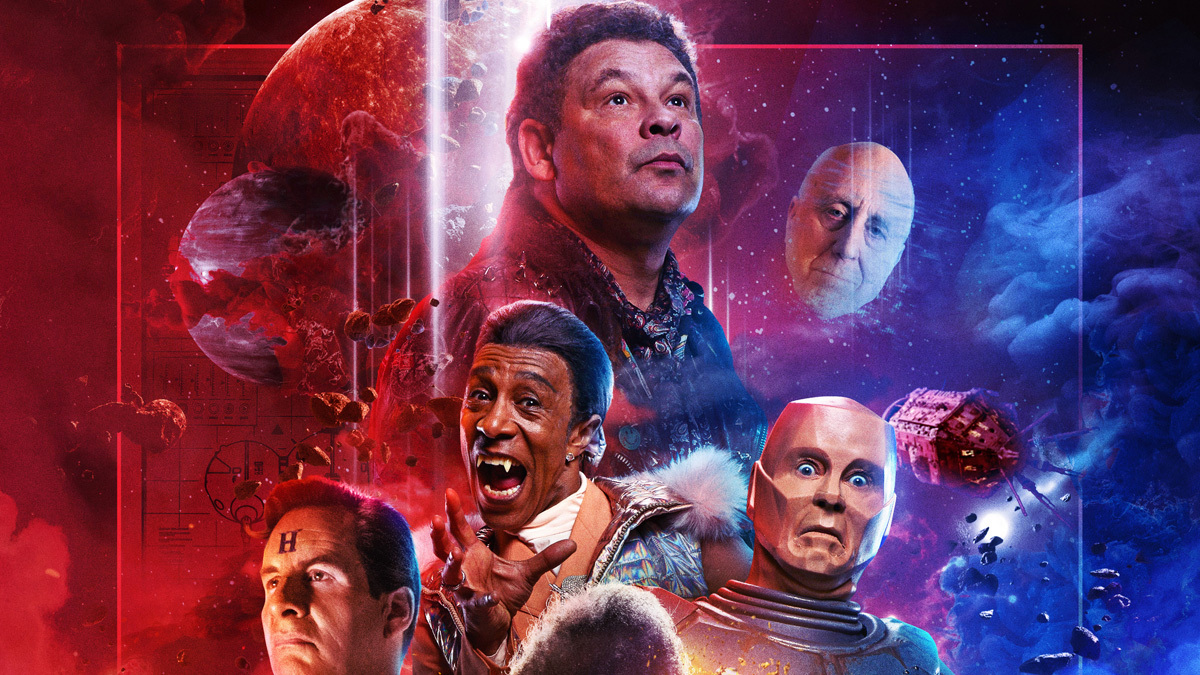 The majority of the shots required extensive rotoscoping. The character, Rimmer, a computer-generated hologram of the long-dead human, turns to black and white when he’s at half power. Jamieson relied on the Mocha Pro plugin inside Adobe After Effects to work under the tight deadline. “The black and white sequences required very accurate rotoscoping,” states Jamieson. “Planar tracking within Mocha sped up this process massively with only having to adjust a couple of keyframes, versus within After Effects where I would have had to adjust almost every frame. I used Mocha’s layer system to break up the character by limb and also to avoid the foreground occlusions.” 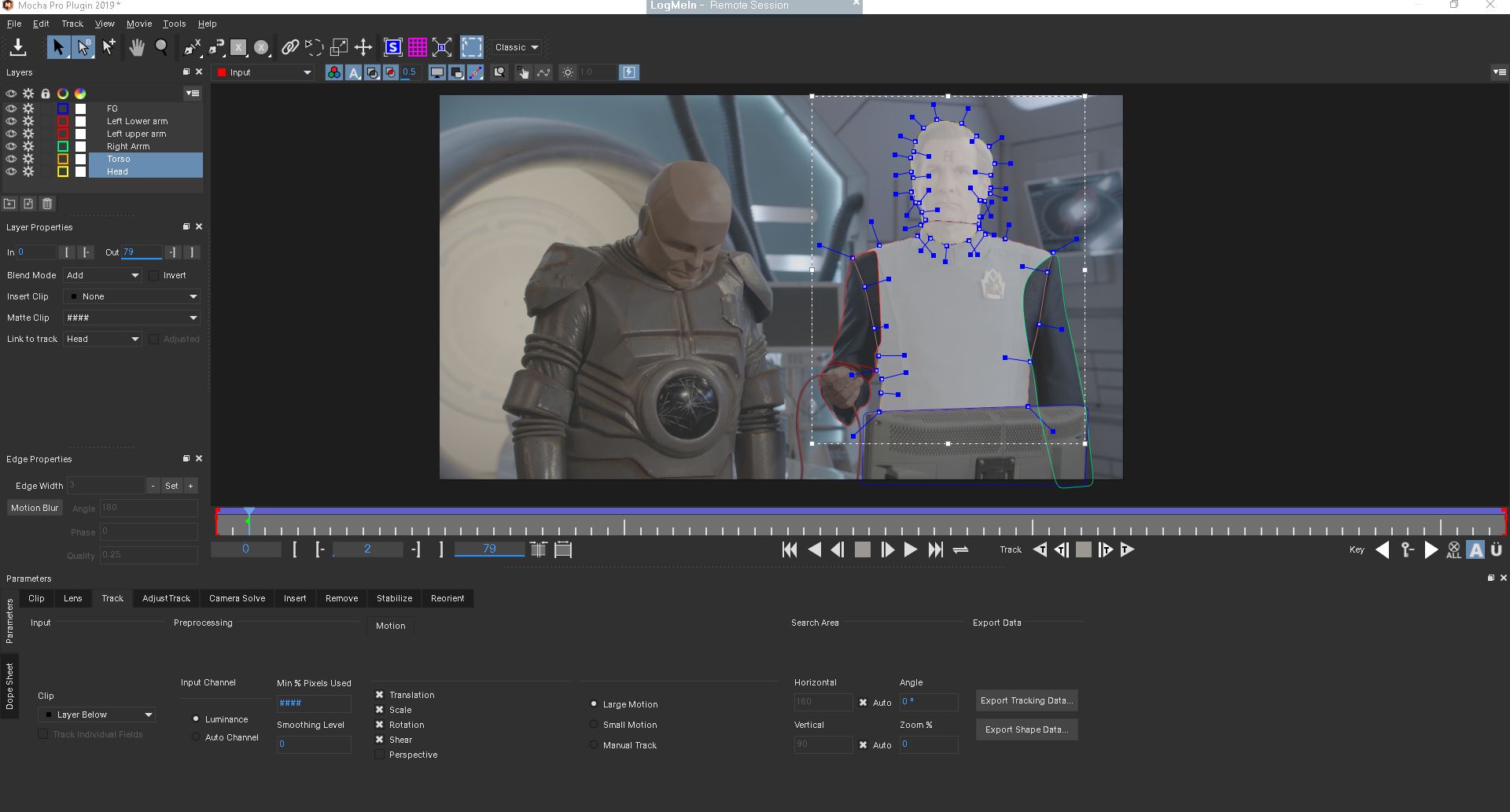 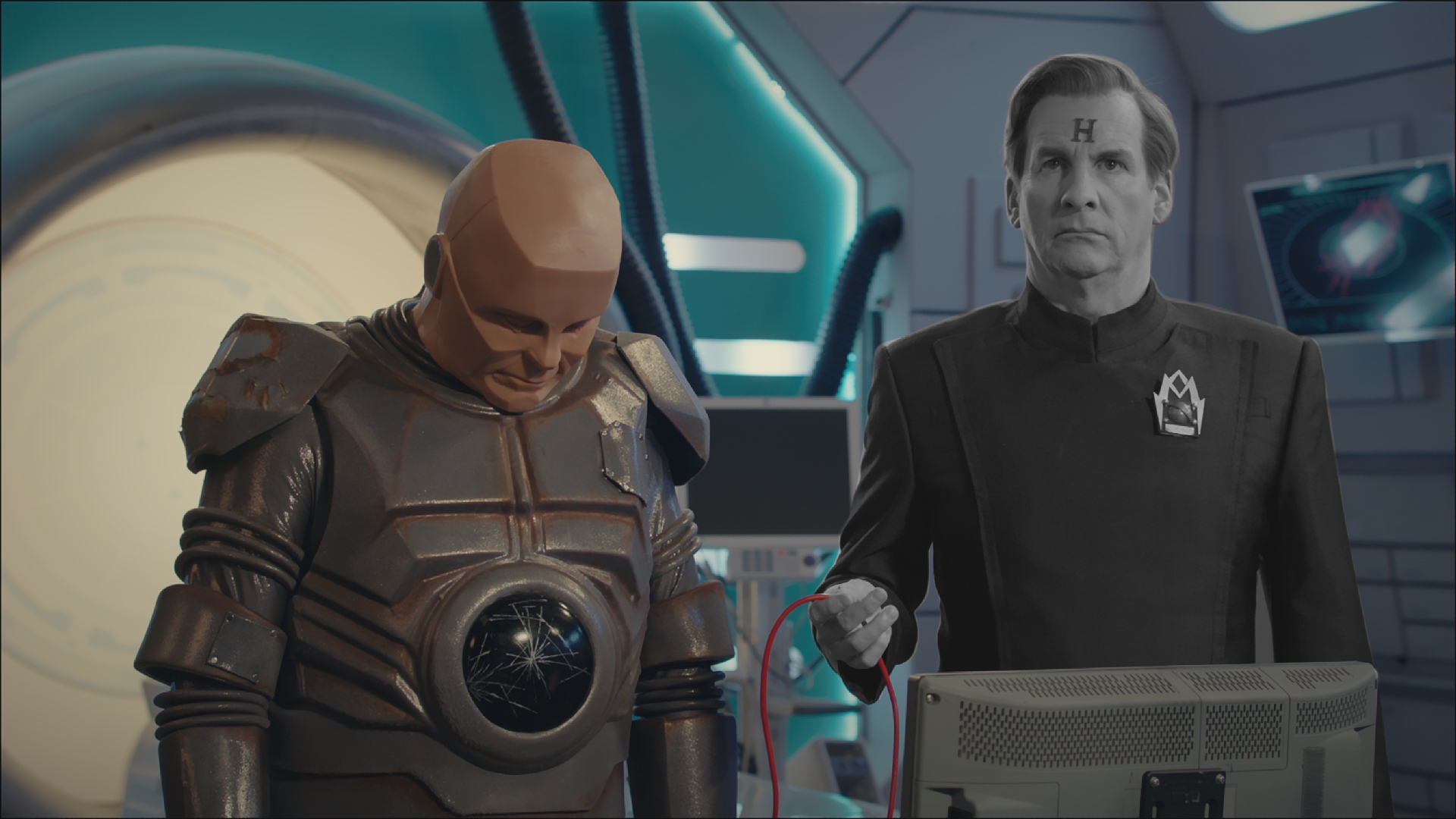 Jamieson also turned to Mocha on what could have proved a tricky green screen composite. In the scene, the character Kryten’s eyeball is poking out the top of a space ship that crash-landed on a desert planet. “They shot two elements — one clean, and one where they poked the eye through the sand,” notes Jamieson. “The elements didn’t match up because the camera was tracking forward on the shot where the eye poked through.” 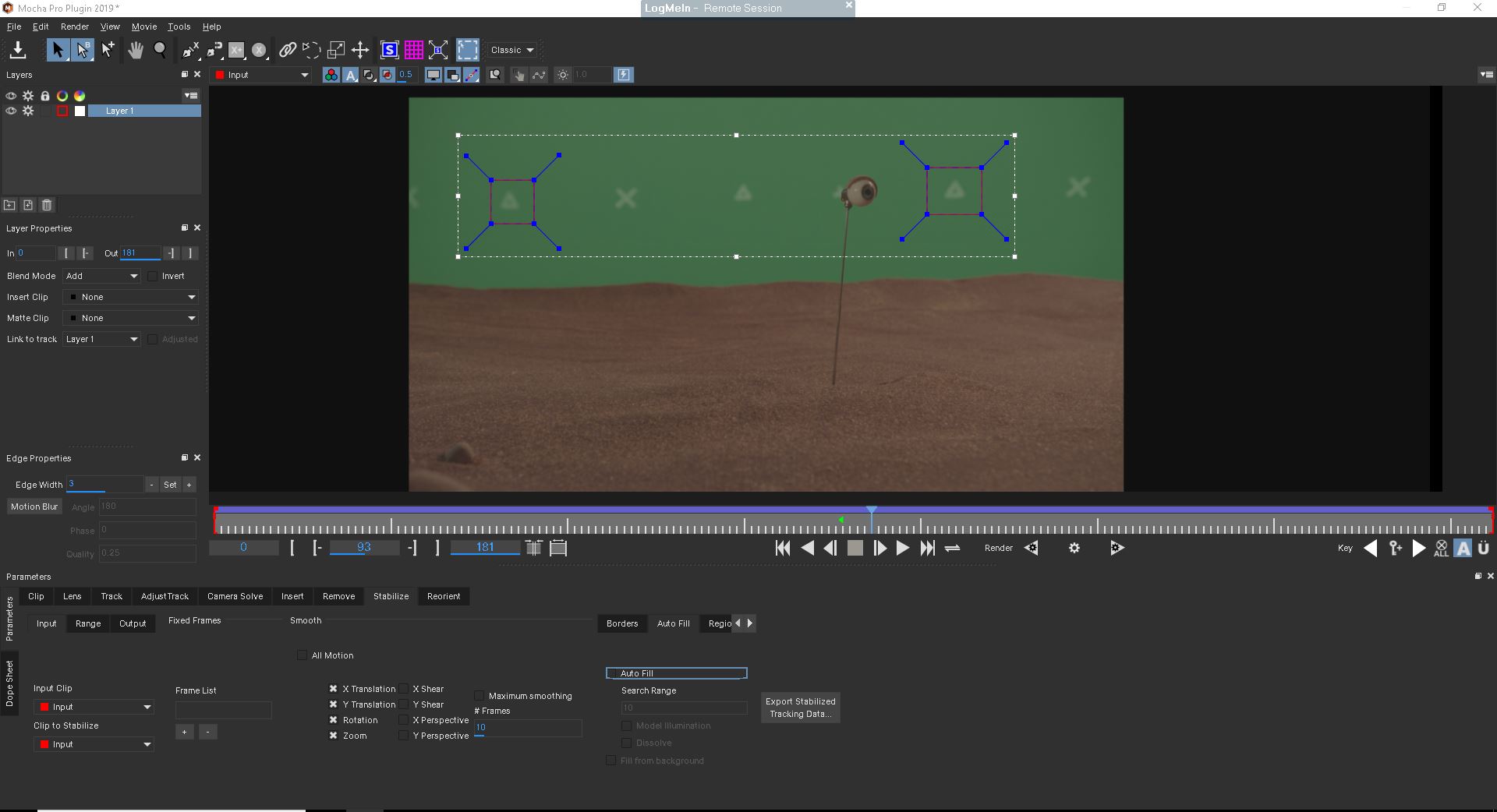 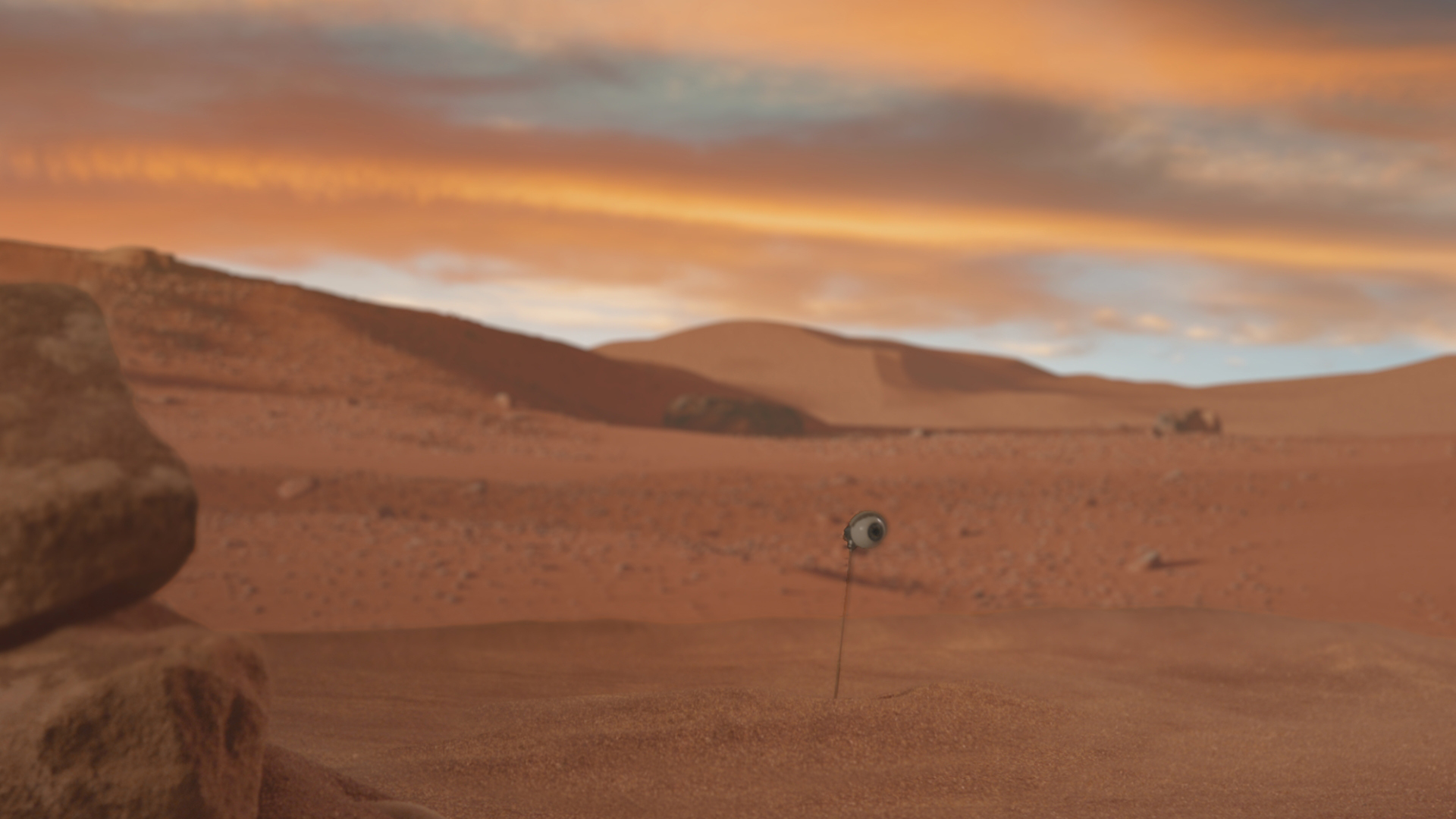 “The tracking and stabilization with Mocha quickly solved the issue by either locking down the moving shot or tracking the static element to the same camera moves,” adds Jamieson. “The task was very simple to do within Mocha as I could track different points of the moving shot to help create a solid stabilization or smooth planar track. This allowed me to composite the two shots before keying and creating the background elements.”

“Having access to Mocha Pro has saved me an awful lot of time over recent years. To be able to execute a rock-solid track from a simple shape has been a huge help to my workflow. I can’t think back to how I managed before,” continues Jamieson. “The ease with roto has increased my productivity and has stopped me from cutting corners to try and save time. I can get very clean edges within little time, allowing my work to be better, quicker.”

In addition to Red Dwarf: The Promise Land (UKTV), Outpost’s recent credits also include Afterlife (Netflix), Midsomer Murders (ITV), and Agatha Christie (Channel 5). “My favourite part of my job is the variety of productions I work on, the range we cover at Outpost, and the facilities we have bringing all the tools needed to complete any task at hand,” ends Jamieson. “Being based at Pinewood is also very exciting with all the massive productions being filmed, bumping into A-Lister’s on my walk to get lunch is something I still can’t process. Driving under the Pinewood sign every day on my way to do the job I’ve wanted to do for years is something I’m very grateful to have the opportunity to do.”