With offices in Los Angeles and Lafayette Louisiana, Pixel Magic offers a wide array of visual effects such as compositing services, including CGI creation of objects, animals, smoke, fire, and matte paintings.  And their capabilities in 3D stereo conversion has landed them work on the Chronicles of Narnia, as well as Harry Potter and the Deathly Hallows. 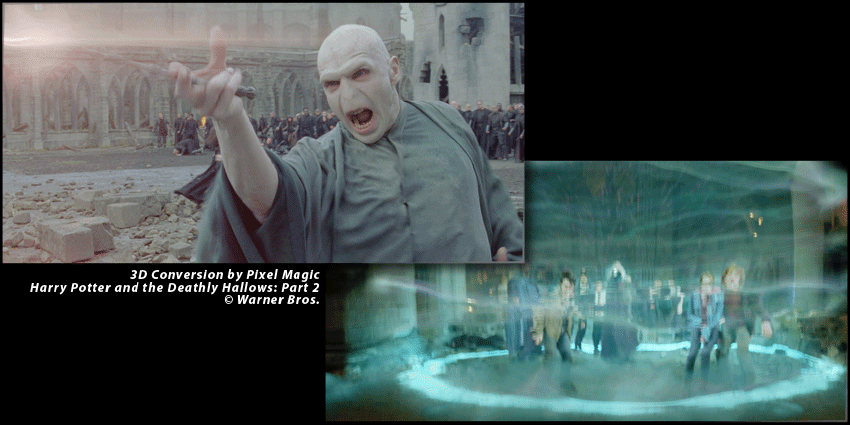 Ray McIntyre is VFX supervisor and co-manager of Pixel Magix and brings extensive knowledge and expertise to the company, having served as on-set VFX supervisor for a long list of Hollywood feature films, including Secretariat, The Help, Thunderstruck, A Thousand Words and She’s Out of My League, to name a few. Ray also is an active member of the Visual Effects Society and serves on advisory boards for Variety’s Show Biz Expo.

Recently, Pixel Magic has been tapped to work on a series of shots from the Hollywood feature hits, Men in Black 3 and Looper. Both of which posed tremendous challenges for the team and leaned heavily on their expertise and proven pipeline of tools. Pixel Magic relies on After Effects and Nuke in their production pipeline, and uses mocha Pro and mocha AE for challenging motion tracking, object removal and clean plating visual effects shots. 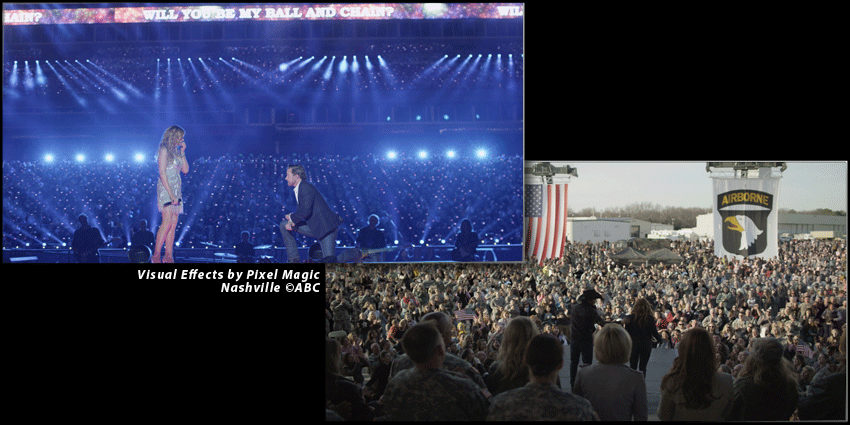 Jordan Alphonso is one of the VFX artists at Pixel Magic and worked extensively on Men in Black 3. Jordan describes some of the challenges he faced on this project:

“I had worked on many shots that required one of the characters’ arm removed for continuity with the rest of the movie.  For tracking data, he was wearing a blue sleeve over the arm that needed to be removed. mocha played a big role here as it helped track various elements of the background, which was made of mostly steel bars that moved independently of each other. Using all the 2.5D planar tracks I was getting from mocha helped me create a clean plate much more quickly than if I was using another tracking application.”

“Not only was I responsible for a clean plate when Boris’ arm was over the background, but his arm also had to be removed when he had it on his side and on top of his jacket. This required a patch and recreation of the missing jacket that his arm was covering up.  The scene was up on top of a high rise building with heavy winds. mocha’s Planar Tracker was able to capture the flowing cloth movement of the jacket, which benefited my jacket patches greatly once I imported the mocha corner pin data into After Effects.”

“mocha Pro was also then used in removing the blue sleeve. I typically would bring the first and last frame of a shot into Adobe Photoshop and paint remove the blue arm, then import those painted frames into mocha Pro‘s remove module.  After setting up the track areas and assigning the clean frames, I was able to let mocha Pro automatically recreate the missing shirt and jacket information based on my clean plate frames.  This was a huge time saver and allowed me to work on multiple shots at the same time.” 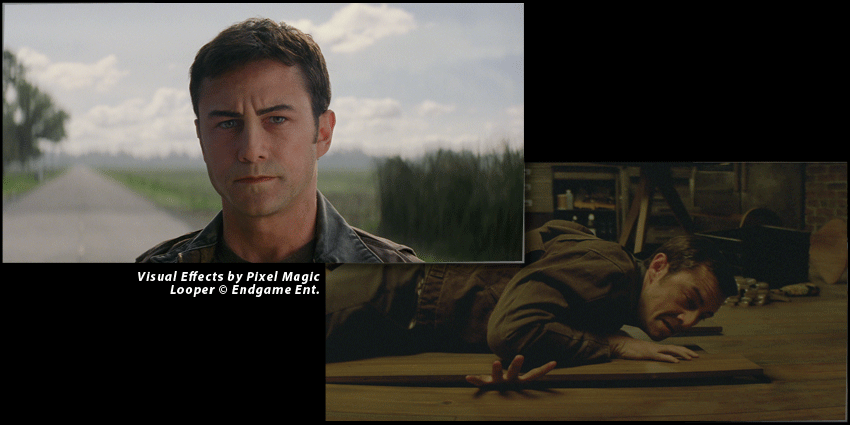 Pixel Magic’s Brad Moylan was a visual effects artist on the sci-fi hit, Looper, and also relied heavily on mocha Pro’s Planar Tracking tools to solve out of focus and lens distorted footage. Brad describes some of the more challenging sequences:

“In Jeff Daniels’ character’s hideout, there are many banks of video displays lining the walls.  I used mocha to get good Planar Tracking data for placing video inserts into the screens, which were just shot as backlit squares on the wall.  Though that sounds straightforward, the plates being anamorphic meant that during rack focus (which occurred in several shots) there was a significant amount of distortion happening in those backgrounds. mocha nailed these perfectly! Copying the corner pin data straight from mocha into After Effects resulted in excellent tracks, reducing significantly the amount of hand tweaking required to compensate for the distortion caused by the defocus over numerous shots.” 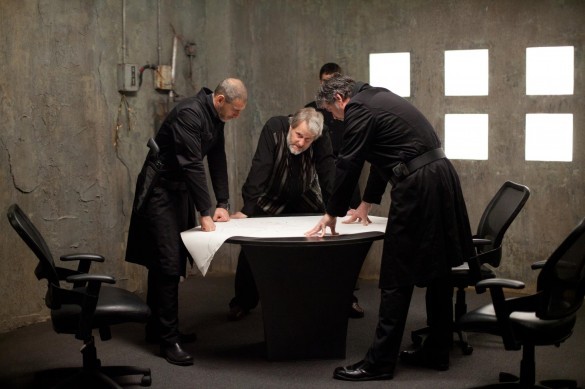 “Also, during the sugar cane field confrontation between Old Joe (Bruce Willis) and Young Joe (Joseph Gordon-Levitt), we replaced all of the skies to maintain continuity of color and cloud placement throughout the scene.  There were similar rack focuses which created fairly drastic distortion in some of the shots. By selecting existing clouds or details such as trees or structures along the far distant horizon line and tracking those features, we were able to track all of this data very successfully using mocha.  These tracks placed as corner pins in After Effects allowed us to composite new skies while matching the original plate’s focus and anamorphic distortion very nicely.” 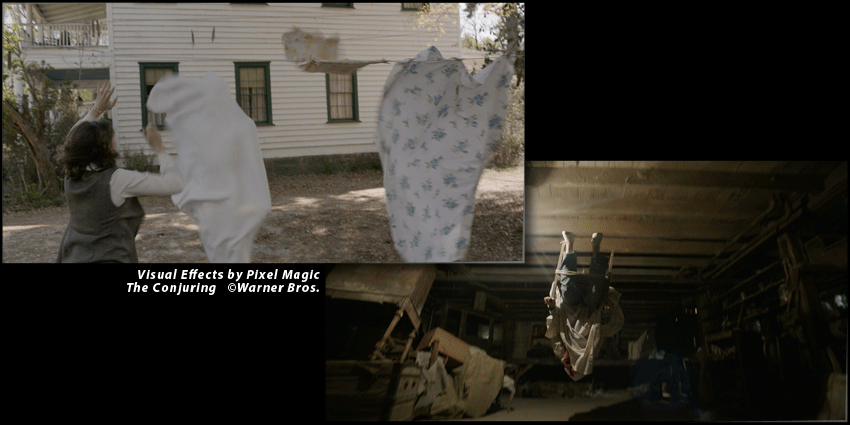 Pixel Magic has recently completed work on The Butler, The Conjuring, and Motel which are due in theaters in 2013 and all were touched by mocha Pro. For more information, or to see more of Pixel Magic’s work, please visithttp://www.pixelmagicfx.com. 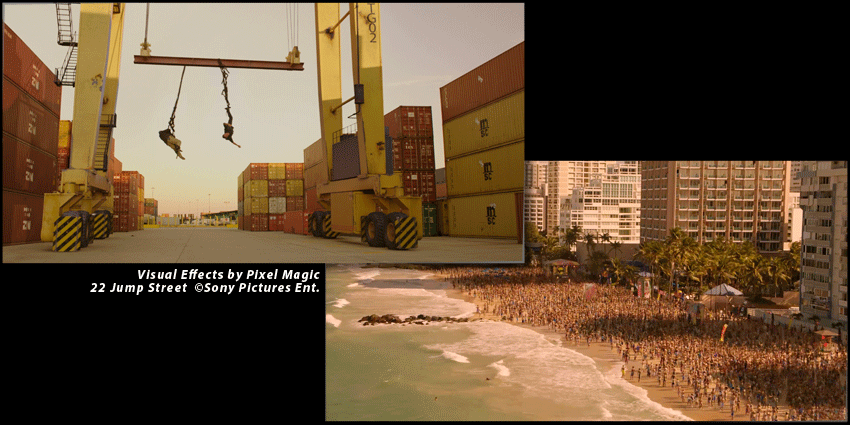