A new generation of stars is on the upsurge, and their red carpet is the computer screen. Video-sharing sites such as YouTube and Vimeo are allowing independent filmmakers with little-to-no budgets expand into the universe that is Hollywood, giving more and more people a chance to reach millions of viewers. And with (sunglass-ed) faces like Joe Penna’s at the head of the movement, the distance between the couch and the silver screen is becoming a little bit smaller.

Joe Penna is MysteryGuitarMan, the Brazilian YouTube sensation with nearly 3 million subscribers known for his playful combination of music-related short films that burst with visual effects creativity. He got his start eight years ago at the dawn of YouTube, and like the budding video platform, he was working barebones. To rack up some video gear of his own, Joe started entering his makeshift videos into competitions.

“That’s kind of been the theme as we go,” says Ryan Morrison, MysteryGuitarMan’s post-production master and Joe’s longtime friend. “Getting out our creativity, while at the same time trying to push ourselves to get better tools to work with so we can make these crazy ideas come true.”

The creative therapy worked. One of Joe’s videos placed first in a Best Buy contest, and he used the $15,000 prize to buy a computer and his first camera, a Panasonic AG-DVX100B. Joe’s approach quickly went from working around his lack of tools to jumping headfirst into every project he could take on.

For Joe, sharing with YouTube was like shooting from a mini-Hollywood. Although the online video-sharing era was only just beginning, he could reach a network of people through sharing, sharing and more sharing. The powerful social platform put big-scale opportunities directly in the hands of worldwide users, all from the comfort of their own home. But with such easy and direct access to your audience comes great responsibilities. Joe’s goal was to produce and publish a new video at least once every week, lest his viewers wait impatiently for more content or abandon him altogether. He knew he needed better tools to speed the workflow to help make this turnaround possible. Cue mocha Pro from Imagineer Systems. The first time Joe introduced mocha Pro into his workflow was around two years ago, after he had been tracking a project frame by frame. After Effects’ 4-point tracker just wasn’t working for him, so Joe turned to Google.

“Google was like, ‘Use mocha! Use mocha, what are you doing?!’” Joe elaborates. “So I downloaded the trial. Before, it took me a day’s worth of efforts in After Effects, and it didn’t look good because I’m a horrible tracker. With mocha, it took me maybe a day and I got right into it. I learned the software and tracked it all in a single day, and it looked way better. The track was immaculate.”

The resulting video, “Paper Band,” has nearly 2 million views to date. Since the video’s success, mocha AE and mocha Pro have been essential in the world of MysteryGuitarMan. Whenever screen replacements are necessary (which is often), or where cloning and nodal pans are needed, Joe and Ryan turn to mocha. The program has transformed from convenient to crucial. “We started using mocha for basically everything it’s intended to do,” Joe says. “Things just started looking better, they started fixing themselves, the clones were starting to look great, so we were really able to progress from there.”

Rising on the Charts

Though MGM now boasts some of the highest stats on YouTube, it wasn’t always hit after hit. The turning point in Joe’s career came after he collaborated with already popular YouTube channels, including Ray William Johnson and Rhett & Link. For the latter, Joe did a branded video called “T-Shirt War,” and it exploded. The advertising agencies from McDonalds and Coca-Cola were so impressed they hired Joe to direct similar advertisements for their respective brands.

“That was the moment I knew I could officially stop stealing my neighbor’s Wi-Fi,” he jokes. “It made it okay for me to make videos for a living. Before that, I was very close to moving back home and living in my parents’ basement again. I didn’t want to do that.” Joe moved to Los Angeles, constantly on the lookout for ideas, and everything around him caught his attention. When Ryan started becoming more involved in the creative projects, especially when he became the behind-the-scenes shooter, it became more of a collaborative effort. Now, if Joe comes up with an idea, Ryan makes some tweaks and transforms it into a producible project. “I’ve become more of a partner instead of just working for Joe, and that’s a power and a space that he is under no obligation to share, and yet he’s more than open to,” Ryan says. “He wants things to be as good as they could be, and that doesn’t necessarily mean they come from one person. I think that’s a really admirable quality in a leader.

“Joe’s a very animated person,” he continues. “He moves his head, his hair … that hair is always a problem! He likes to dance, so we shoot him dancing on green screen a lot, and he doesn’t stay totally on the green screen. When things need to be roto’d out, it’s a lot easier with mocha. I really use the videos that Imagineer has up as a resource a lot.”

With just a week to shoot and produce material (a self-imposed deadline), the MGM team appreciates the speed at which mocha allows them to work. Ryan comments, “That’s why mocha has been so integral lately – because things like roto work and cleaning up shots is so important in making our work look that extra bit better, to make it look more professional. So that’s really been a lot of help.”

Not only do mocha’s tracking capabilities facilitate a much smoother postproduction operation, but also it gives Ryan and Joe peace of mind onset.

“It’s kind of become a saying when we’re onset,” Ryan reports. “We say things like, ‘We’ll just track that in mocha. We’ll paint that out or we’ll roto it with mocha.’ It’s absolutely a standard for us.”

With a solid production and post team and process on lock, the rest is smooth sailing. “It’s cool showing up to work with one of my best friends every day,” Ryan says. “We just kind of do what we want – like right now, we’re making a movie. We were watching it yesterday, and Joe was like, ‘We invented this. Everything that everybody’s saying and doing right now, we did that!’ Like, we came up with that. It’s just a funny thing to think about.”

Joe, Ryan and the MGM team just wrapped up a movie called Instant Getaway, a sort of grounded sci-fi. The plot centers on a young man in Mexico who comes to the United States illegally through a teleportation system and is then accused of murder. Joe’s inspiration comes from directors such as Michel Gondry and Christopher Nolan, and he’s excited to pay homage to them with the movie’s exciting visual effects.

The guys used mocha Pro a ton on the film, particularly for tracking transitions between scenes. According to Ryan: “Every single VFX shot in the film we had to use mocha to track something, whether it be to roto or a planar track for a screen replacement. We had seven days to shoot 34 pages, and then we had about a week to turn around the post on it.”

“I had a pretty good understanding of mocha before that, but now that I’ve really been using it every day … when it’s one of your regular tools in your kit, it just makes everything a hundred-thousand times easier,” says Ryan.

The team is working in tandem with New Form, Ron Howard’s new digital company, to produce Instant Getaway. Proving their success and viability as a hit YouTube channel, Joe and Ryan have also worked with other big names in the business – such as Sleepy Hollow actor Orlando Jones, who starred in their film Meridian. Joe invests a lot in his team, in the YouTube channel and in the subsequent productions. His faith largely contributes to their success. Now completed, Instant Getaway means a lot more than just a sigh of relief. It is a mark of how far Joe has come, from projects created on the fly with little to no tools to large-scale productions featuring superstars. “It’s a big one,” Ryan says of the new short film. “We’re really proud of it. And we’re really happy with mocha. Without question it makes our jobs easier. I got to spend the day yesterday – instead of rotoing something out, I roto’d it out in five minutes – and I got to spend the day really refining the effect that we were going for.”

“It’s so smart and so fast,” Joe says. “It speeds up our post workflow and gives us more time to focus on the actual effects instead of wasting our time with rotoscoping and the minutia.” 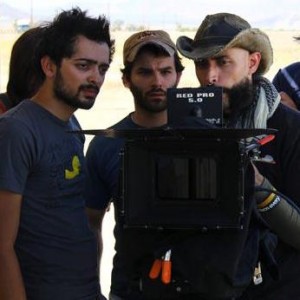