The plot, gritty aesthetic, and camera work in the Safdie brothers’ critically-acclaimed film — Uncut Gems (starring Adam Sandler at his best) — can be stress-inducing. Luckily, for the team at Mechanism Digital, handling the visual effects was not. The New-York based CGI/VFX/Animation studio, known for its work on indie films (Hereditary, Luce, Waves) and episodics (HBO’s Righteous Gemstones, Netflix’s Russian Doll, and Showtime’s The Affair) turned to Mocha Pro’s powerful planar tracking and rotoscoping tools on over 100 shots in the film.

The team takes a two-prong approach to tackling projects. Artists use Mocha with After Effects for motion graphics-based projects, while Blackmagic Design’s Fusion Studio is favored on more complex visual effects shots. “Fusion has some pretty good trackers and After Effects has always had built-in tracker functionality but ever since Mocha Pro became the standard, our artists default to Mocha first,” says Lucien Harriot, President & VFX Supervisor. “Now that Mocha Pro can be used in both, our artists are able to share tracking and roto data between software applications so larger projects can leverage an assembly line of artists (separate tracking, roto, and comp artists) and not have to worry about which software the final comp will be done in. Mocha Pro makes it easy for people to work on different aspects of the same shot to speed up the process. It’s very effective.” 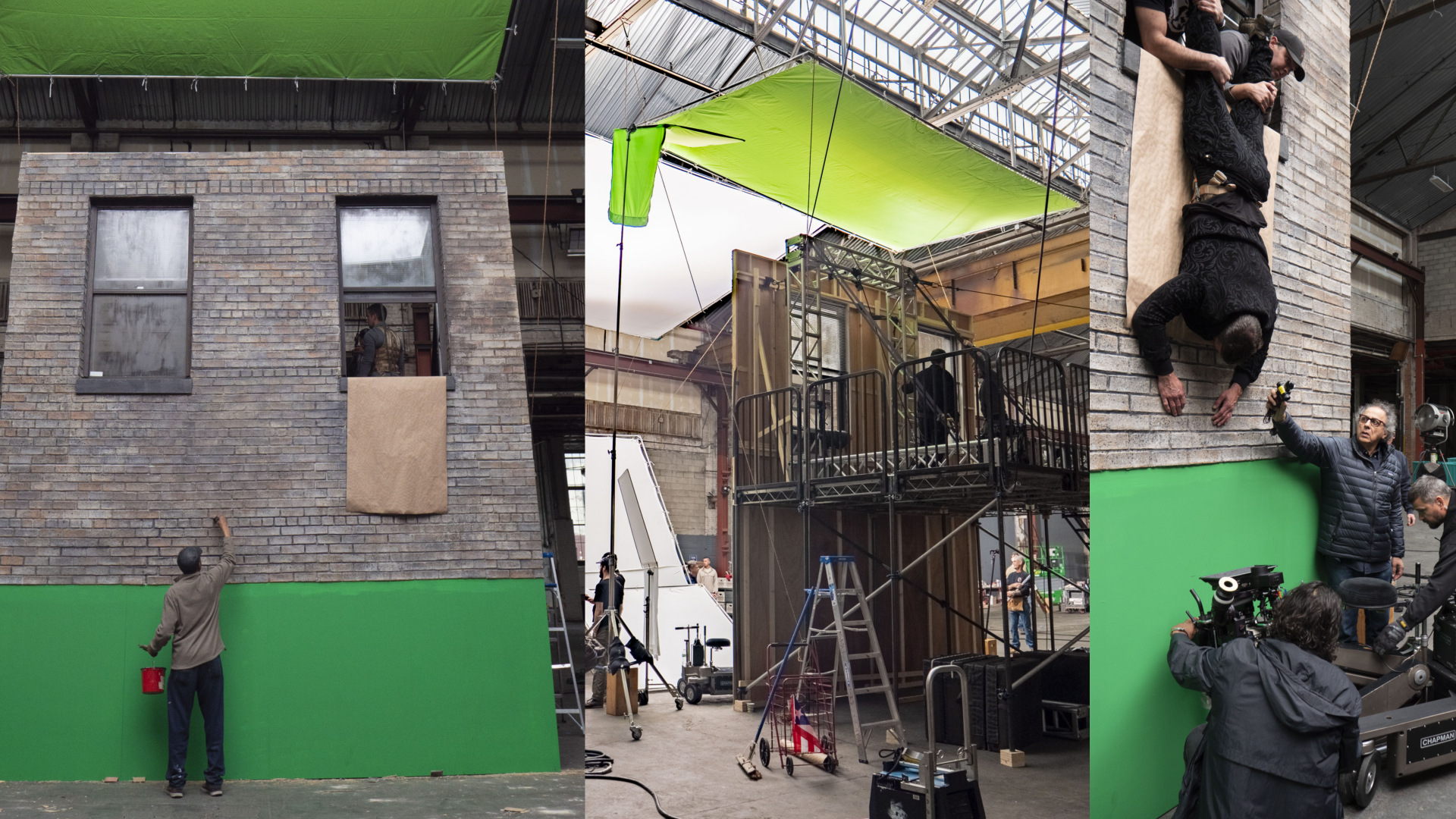 Harriot entered Uncut Gem’s pipeline early on as the Visual Effects Supervisor to tackle complex effects shots in pre-planning. In one particularly nerve-wracking scene, Adam Sandler’s character, Howard Ratner, dangles outside a building high above Manhattan’s 47th street/Diamond District. Mechanism built a digital set extension to add to the art department’s physical set piece (pictured above). The team also shot background plates of all the exteriors on 47th street which can be seen from inside the window. (Read Harriot’s detailed account here) “On-set and shooting plates were fairly relaxed for the VFX teams, but once we got into finishing, the schedule got tight,” notes Harriot. “Completing more than 100 VFX shots between conform and color correct only left us a few weeks.”

Mocha was used on almost every shot in the film. The team would often use one track to guide dozens or more roto layers. This system became especially handy in a shot where a row of Citibikes (which hadn’t been invented yet in the film’s world) can be seen in the background. Mechanism needed to figure out how to remove them. Rotoscoping and building the crowd’s legs between the bike spokes wasn’t possible due to the budget. Instead, the team decided to composite in a few more construction barricades.

“We were able to establish a track throughout the highly-dynamic handheld shot by tracking, linking, and combining different objects that were visible at different times in the shot,” states Harriot. “This was helpful to track in the roadblocks and guide the 40-50 roto layers of people, cars, light poles, etc. Mocha was also very valuable in terms of getting fast garbage masks to mock up effects for compers, while roto artists spent their time only doing roto on things that were necessary.”

Adapting to unexpected challenges whether they are budgetary or creative is par for the course when you’re a visual effect artist — and Mechanism relishes it. “Everyone (from directors to the audience) want to see something nobody has ever seen before,” ends Harriot. “We are always trying to come up with answers to expensive problems for filmmakers. When we are able to accomplish the same look on screen for a fraction of the cost, it’s a great feeling.”