For over 14 years, LOOK Effects has been a leading provider of digital effects solutions for feature film, episodic television and special venue projects.  With studios in Los Angeles and New York, LOOK offers a knowledgeable and resourceful approach in partnering with their clients to supervise and produce visual effects.  On both coasts, LOOK offers ideas and options for digital effects design, on-set supervision, set-extension creation, 3D animation and complex compositing that dovetail smoothly into production schedules. This combined experience and expertise has earned LOOK a high level of trust and an impressive list of clients and credits.

LOOK’s effects for Darren Aronofsky’s Black Swan have been nominated for both VES and BAFTA awards for visual effects. In fact, one of the more interesting attributes of Black Swan, is that you wouldn’t necessarily think of it as a VFX heavy movie. It looks like a straightforward film; yes, with some amazing special effects! In fact, the filmmakers worked quite hard to make it appear as such. They wanted the viewer to focus on the drama, and not the VFX.  And that’s where LOOK FX comes in. Because at the end of the day, their specialty is immersing you in the film, and not distracting you with effects. We recently spoke with the team at LOOK and asked them to describe the project, its challenges, and how they overcame those challenges to deliver such an impressive body of work.

The VFX crew at LOOK FX was huddled around the workstation. It was late, they were tired, and they had spent the better part of the last 8 weeks trying to nail this project down – make it perfect. Anxiety was setting in, the shot just wasn’t working, and the client was getting antsy.

The client: Fox Searchlight Pictures. The project: Black Swan. This was a big deal.

Black Swan is a psychological drama/thriller that very effectively takes the story line of competing ballet dancers, combined with amazing visual effects to create a story that everyone is talking about. And in VFX circles, everyone is talking about the incredible effects – the ‘how’d they do that’ moments that envelope the film, and not only enhance, but drive the story.

While the VFX throughout the film were very sophisticated and complex, one shot in particular was more vexing than the team anticipated. In the scene, Natalie Portman is first experiencing the appearance of the swan-like skin; appearing first on her back and shoulders, creeping down her neck and up her arm. The image is a series of effects, combining feather quills and textured skin, along with dark make up that rapidly spreads across her skin. While this is happening, the camera is sweeping up and down Portman’s arm and torso, while also rotating around her body.

To execute the visual effects on this shot, the team had been working for weeks trying to make it work. The end result had to show the effect starting on her back, neck and shoulders, then continue the transformation process progressing further while tracking around her arms with the camera panning close up. It’s a complex 360 degree shot showing the metamorphosis happening, with constant camera motion. And all of the effects had to be tracked to her arm. But the problem was; the team couldn’t lock it down – there was far too much camera movement, and to add to the problem, there were minimal tracking markers on her arms – nothing useful to track to. The team had exhausted their arsenal of tools, but they couldn’t make it work. The timing and movement in the shot were just too fast. And the client was getting nervous – the deadline was fast approaching. There was one option left, however. “Call Buddy!”

Buddy Gheen is a VFX artist and digital compositor at LOOK FX Los Angeles, with a long list of credits to his name, including James Cameron’s Avatar, Step Up 3D, Get Smart and The Break Up Artist, as well as a number of television series including Bones, Lost: The Final Season and CSI. And at LOOK FX, he’s known as the ‘shot doctor,’ mainly because they can bring him in at the 11th hour, when all seems lost, and Buddy can make it work.

“When I walked into the studio, I could immediately see the frustration – on all sides. The team was worried, the client was frustrated; but it had to get done, and fast. They gave me a quick briefing and review of the shot. I could immediately see the challenges – the camera motion was wild, fast and hard to predict, and there were minimal tracking markers; the camera movement, combined with the actress’ body movements made them nearly impossible to pick up. Everything throughout the shot was in constant motion. There was slight rotation in the arm, little subtle body movements, all while the camera is panning and rotating 360 degrees. The timing just wasn’t right for all the things client wanted to happen in the shot.  And the reveal – the swan-like skin, which has tremendous detail and texture was so fast, it looked like a wipe. A tracking nightmare! 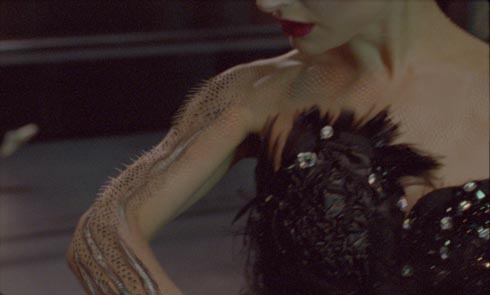 The team at first had tried to match move all the components, create all the information, output passes, etc. And they had been trying to make it work for so long, they were very frustrated.  But when I saw what was going on in the shot, I knew immediately what to do. I had one magic bullet in my gun, so to speak. It was Mocha. I knew right away that Mocha could do this – I’d done it before! I’ve been using Mocha for years and it’s solved all kinds of seemingly impossible tracks, so I was well aware of what I could get away with.

The challenge, however, would be when all the notes and changes came back once I delivered the concept. So I created a pipeline specific to this shot, with mocha as my magic bullet.

First, I was able to literally paint onto her arm using a photo realism technique I’ve developed. Using Photoshop and Adobe After Effects, I painted photo real images, using samples of turkey skin images, goose skin, quills coming out of baby birds, and combined them into a single look and feel. I then ‘painted’ this image to her arm. The imagery alone was incredible, but the question remained, how are you going to make this work? It still needs to track to her arm with all the crazy camera movement. And that’s where Mocha came in. 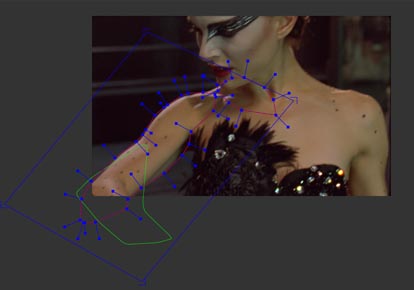 In an instant, Mocha allowed me to hold onto my photo-real matte painting I had created, track it to her arm, integrate the image into her skin, and allow the ‘reveal’ to happen. The result blew people away. With no tracking markers, all the wild camera movement, the Mocha track was perfect.

Mocha is an indispensable tool. No other tool out there can do what Mocha does. Today, it’s just a normal part of the VFX workflow at LOOK FX, just like pulling a key, it’s a standard. None of this would have been possible withoutMocha.

And once the team realized all it could do for Black Swan, it became an instant part of that workflow as well. From bringing paintings to life – when all of the paintings in Portman’s room came mysteriously to life, I used mocha to track each individual painting’s movements, all while the camera moved somewhat wildly through the shot. Once we had a solid track with mocha, we were free to then change the elements as needed and simply swap them out. mocha held everything in place (none of our other tools could track that), mocha saved the day! And the added beauty of Mocha was my ability to export tracks back to the After Effects team. Even if they had changes or suggestions, the interoperability between all of our tools and mocha was seamless. We had the template locked in with mocha, so we could change whatever we wanted without impacting the deadline.

Mocha clearly stands alone. mocha has freed us from the stress of “how are we ever going to get this done,” to the freedom of allowing us to explore any wildly creative idea, knowing that Mocha can handle anything we throw at it!

In addition to Black Swan, LOOK FX’s other film credits include: The King’s Speech, Wall Street: Money Never Sleeps, Step Up 3D, Just Wright, and Bounty Hunter. Television credits include: Harry’s Law, No Ordinary Family, Bones, the Emmy-nominated effects for Life After People, and all of the effects for the final season of Lost.