Tracking Shots is No Joke for Gloo Studios

The reviews for CollegeHumor’s “The Tron Lebowski” are positively glowing, no doubt because the video’s neon visual effects came together with the help of “gloo” – and a bit of mocha by Imagineer Systems.

Gloo Studios, the award-winning video production studio stationed in Vancouver, was hired by CollegeHumor to work on the visual effects for the two-in-one spoof on “The Big Lebowski” and “TRON: Legacy.” To make “The Tron Lebowski” stand out, Gloo had to put their visual effects skills to the test.

CollegeHumor is just one of the big names Gloo works with to create standout visual effects, post-production and video production. “I met CollegeHumor while I was freelancing, and when I got onto their roster, I picked up as much work from them as I could,” says Mike Ritchie, Gloo’s visual effects supervisor. He clearly impressed them: “When some friends and I joined up and created Gloo, CollegeHumor started almost exclusively giving us all their visual effects work.”

The team at Gloo had about three weeks to work on “The Tron Lebowski,” which meant three weeks to implement TRON’s signature glowing strips. To make the futuristic strips on the characters’ suits look realistic, they originally planned to use LED lights. The costume designer couldn’t get the LEDs in time, and with only a couple of days before production, the team started sweating. The idea they came up with for their short timeline and tight budget was to put green reflective strips on the suits. In the initial tests, it worked well, but when they got the actual footage, the lighting was off. They had no choice but to rotoscope the strips. 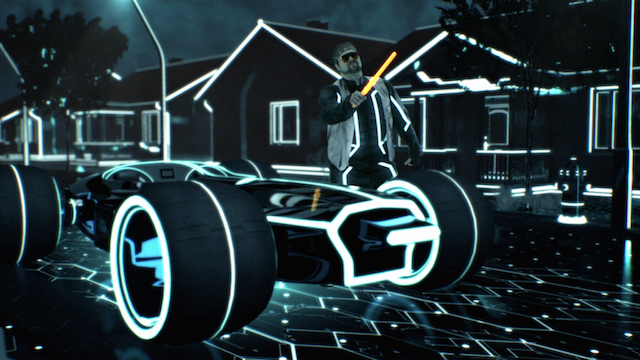 Mike and the post-production crew had no idea how they were going to get all the rotoscoping done in their allotted time. Previously, they had used mocha to do some tracking, but they hadn’t yet heavily integrated it into Gloo’s workflow. For “The Tron Lebowski,” they knew they had to make a drastic change.

“We started tracking everything with mocha, and it probably knocked down our workload to about 25%,” Mike says. “We totally would not have been able to pull off what we did in time if we hadn’t used mocha. That was a real day saver for us, the biggest save we’ve had in the history of our studio. It really sunk in that mocha was something we needed to use all the time.”

What would have taken Gloo a month or two to roto by hand ended up taking less than half the time.

Since then, Gloo has used mocha for nearly all their tracking, which they do a ton of. The team works on many online videos and commercials and, with projects that involve a good deal of screen tracks, of phones and monitors, and replacing the content inside these screens.

“For the recent Weird Al video we did, ‘FOIL,’ mocha was used throughout the entire process,” Mike says. “The whole song is about conspiracy theories, but it’s set in a cooking show.”

Weird Al sings about foil and its different uses to the tune of Lorde’s hit single, “Royals” in a kitchen with a number of monitors showing whatever he is singing about. In order to display the content as if they were real TV monitors, Gloo supervised the setup of green screen panels on set, allowing them to be replaced easily in post using mocha.

“For the most part, mocha was able to track everything without a hitch,” Mike reports. “There were a couple little set extensions and stuff we did as well. For example, the counter was shot at an angle and they wanted to straighten it out. We used mocha to do the tracks, fixed it as an image and tracked it back into the shot.”

For this particular video, some of Gloo’s tracking tasks didn’t follow the usual set of rules. Take, for example, the unexpected reveal of Patton Oswalt as a product of the conspiracy Weird Al refers to throughout the song.

“At the very end of the video, Patton Oswalt pulls his face off and reveals that he is a lizard. For that shot we had some problems because his shirt was moving quite a bit and the 3D track wasn’t perfect. We used mocha to clean up a lot of that track and to do the roto so we could do some shirt paint out and repairs. mocha was able to track everything without a hitch.”

A common problem for post artists, Gloo sometimes receives footage with tricky shots not perfectly prepped for post-production or visual effects editing. If you’re not using mocha, tracking markers on moving objects are essential. Even when they are included, if the markers move off the green screen or out of the shot, it requires quick thinking and innovation from the team. 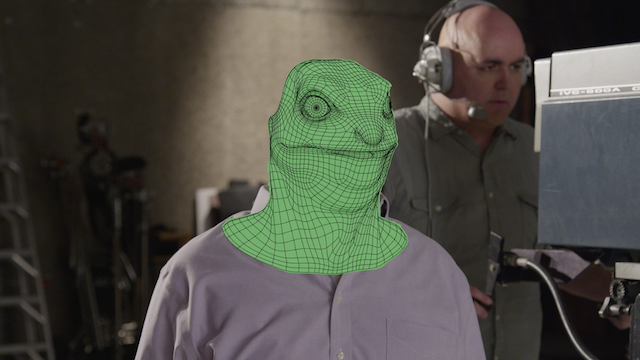 “We worked on a recent project where we had to put a logo on the back of a horse carriage, and for tracking markers, they just put a big green circle on the back,” Mike says. “When we looked at it, we thought we were going to have to do it all by hand. Then we ran it through mocha to see what it could do, and it worked. Nine times out of ten, mocha just does it. It’s amazing.”

While working on “The Tron Lebowski,” the team encountered a similar obstacle. Because the video required so much movement, there were times when some of the tracking markers disappeared from the frame. Typically, this means the team must continue to track by hand, adding hours and hours of work to the project. With mocha, Gloo was able to track texture on the green screen itself to prevent the object tracking from malfunctioning.

Gloo is closing in on a thousand projects with CollegeHumor, and with about 10-20 shots per project requiring some sort of tracking, it’s safe to say they’ve done tens of thousands of shots using mocha.

With around 30 million views each week, CollegeHumor videos are up-to-the-hour fresh. Some videos are produced just days or even hours after the event in question occurred. For Gloo, this means turning around projects fast – without compromising on quality. It’s an area where mocha allows them to shine.

“When something happens, or when someone says something stupid and everyone is commenting on it, CollegeHumor is already churning out a video with their own comedic take on the situation,” says Mike. “On our end, we have to get that video turned around very quickly. Not having to worry about your tools is really handy, and mocha helps us a lot with that.”

Depending on the company and the type of video, Gloo has anywhere from a couple of hours to a couple of months to “gloo” a project together. And for them, mocha is the strongest bond there is. 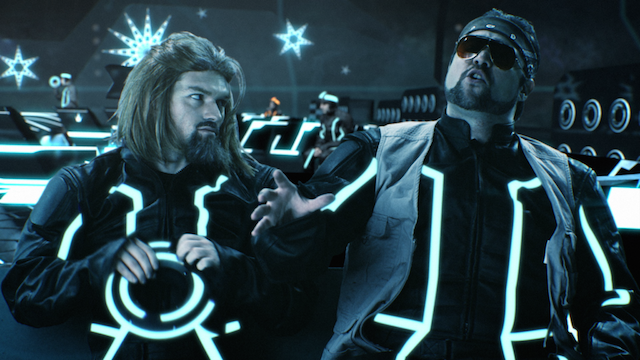 “We prefer to focus on creative work rather than troubleshooting,” Mike says. “And mocha saves us. All the time.”

To see more work from Gloo Studios, visit them online at http://www.gloostudios.com/.