When it comes to beauty work and film, there are only two phases that count: production and post-production. Production, in part, consists of a team of makeup artists – a little concealer here, some blush there and a perfectly painted performer ready for the camera. In post-production, all the things that happen during the course of the shoot come to light: a pesky blemish that found its way into the shot with the help of some harsh lighting, strands of hair that came loose during a brilliant dance move, or maybe just a wardrobe malfunction that occurred on an otherwise perfect take. But thanks to the talented Flawless FX team and Imagineer Systems’ mocha Pro, regardless of the imperfections that find their way into the scene, the final outcome will always be nothing short of stunning.

Known for their outstanding beauty work, take one look at the Flawless FX demo reel and you’ll see how they got their name. Creative director Howard Shur’s work includes world-renowned musicians and actors such as Taylor Swift, Beyoncé and Halle Berry gracing the screen with jaw-dropping perfection. Trusted by the world’s biggest brands, Flawless’ visual effects artists understand the importance of producing a look that, while void of any undesirable imperfections, is still 100% human. Striking this delicate balance is an art form all on its own. To achieve this feat, Flawless FX looks to mocha Pro.

“In general, we use planar tracking and roto with mocha on every job; nearly every shot we do is tracked inmocha,” comments Howard Shur, creative director and partner at Flawless FX. “mocha Pro and mocha AE are an integral part of our workflow. Shots are sent to Flawless, brought into After Effects – often upwards of 50-80 shots per project – and then objects and faces are tracked in mocha. I use the ‘paste mocha mask’ feature in After Effects to give me a solid level of control over what goes where.”

Specializing in artist-driven beauty work as well as rig and logo removal and set extensions means tracking and roto are a huge part of the everyday workflow at Flawless. Projects range from music videos and commercials to TV and film and everything in between. According to Shur, some of these jobs are particularly challenging and time-consuming because each shot must be consistent. Even for something as seemingly short as a three-minute music video, when the lighting setup is constantly changing and talent is moving around, it becomes quite difficult to keep shots looking natural throughout the entire project.

Just as the projects as Flawless FX vary, the approach to each type of project varies as well. When it comes to music videos, the job is to make the star look perfect. Conversely, when working on TV and film, the work is much more subtle. For example, if a scene is shot over a few days and the actor has a breakout on day two, Flawless must paint out the breakout to keep the scene consistent. Whether it’s ensuring the actors appear the same in every shot or removing a shadow mistakenly cast over an object in the scene, Flawless will fix it. “The basic idea is that, with our TV and film work, we aren’t always going for glamour. Often it’s more about removing distractions and keeping consistency across shots.”

“Recently, we worked on a very close-up heavy spot for Neuro Sleep with Neil Patrick Harris,” Shur says. “Men’s skin, while it requires less overall beauty work, actually requires more intricate work. The idea is to keep their skin looking manly and slightly rough while removing any blemishes they might have. For this job mocha was extremely helpful. The actor’s face was tracked in several parts, which allowed us to create general softening masks. Then, individual areas were tracked in mocha which helped in our paint process.”

A well-known challenge in post-production and visual effects is motion tracking skin, faces and body parts. These low detail areas provide little contrasting pixel data for traditional point or 3D feature trackers to hold on to. mocha’sunique planar tracking algorithm, on the other hand, has no problem locking onto these “untrackable” areas, allowing VFX artists to easily isolate regions for digital makeup, blurring and color correcting. “Tracking skin can be a challenging undertaking on its own, but often motion blur, fast-paced movements and dramatic lighting shifts add to the issues. This is particularly an obstacle for Flawless FX, where they often have to perform digital retouching on artists dancing in music videos,” states Ross Shain, chief marketing officer at Imagineer Systems. “Fortunately,mocha tracks faces and skin like no other. It’s been a trusted tool on recent feature films such as ‘The Hobbit,’ ‘The Great Gatsby,’ and ‘American Hustle,’ where post production faced – and overcame – similar complications with tracking the impossible.”

Shur says that, in the past, when he’d track faces with point trackers, he’d mostly have to track the corners of actors’ eyes, as that was often the only solid point to track to – however this only works for masks that would fall in that general area. “mocha’s technology works amazingly on faces and allows us to track and roto more articulated areas of the face like lips, chins and even head turns much more easily.”

At Flawless, every beauty shot is made up of a complex group of masks, often upwards of 30 per shot, as well as paint strokes for the more minute details. Shur and his team track objects and faces, and then generate each mask piece they need using these tracks. He adds, “Often times an artist will be ‘expressing themselves’ and might bring their hand up to their face while singing. We need to roto the hand out while keeping consistent beauty work behind that area and mocha makes that so much easier than it used to be.”

Generally, when working on a music video, Flawless will have one to two days of beauty work, rig and logo removals and general set cleanup done by one or two artists, depending on the project at hand. With so many jobs in HD, 2K and 4K these days, Shur has found that they tend to do more paint than in previous years, when projects were shot in standard definition. “The work needs to be much more precise. That’s why mocha is so important to our workflow.”

Shur continues, “Beauty work was much easier when projects were shot in standard definition. You had film grain and blurs with lots of leeway to trick the eye a little bit. Nowadays, the picture is so sharp, making the areas we work on much more specific. mocha allows us to get these really great tracks that I never used to be able to get with standard trackers.”

To get a sense of mocha’s impact on the workflow and efficiency at Flawless FX, Shur opened up his archives to find a project done about eight years ago. “The footage was grainy 16mm, and I remember it took me upwards of two weeks just to track the shots. So when I recently took another look at the project, I pulled a shot into mocha that had taken me a full day to track with point trackers (with iffy results). mocha tracked it perfectly on the first try. I don’t even waste time with point trackers anymore.” Suffice it to say, mocha has helped the Flawless FX workflow greatly.

With the technical aspects of digital beauty work down to a science, Flawless FX hopes to change the perception of post-production artists on the set. Traditionally, beauty work is something that goes on in the background; it’s even more “behind the scenes” than what goes on off-camera. Flawless FX wants to put a face on that work. Consider them another member of the production crew, equally as visible as the makeup and hair departments.

“We want to create a new model for the way digital beauty work interacts with production,” Shur says. “We want to be more hands-on, coming to the set and talking with the DP, makeup artists, actors and others on-set. By doing that, we can find out the challenges they’re facing so we can work with them, saving them time and money by enhancing what they do with what we can do in post.” 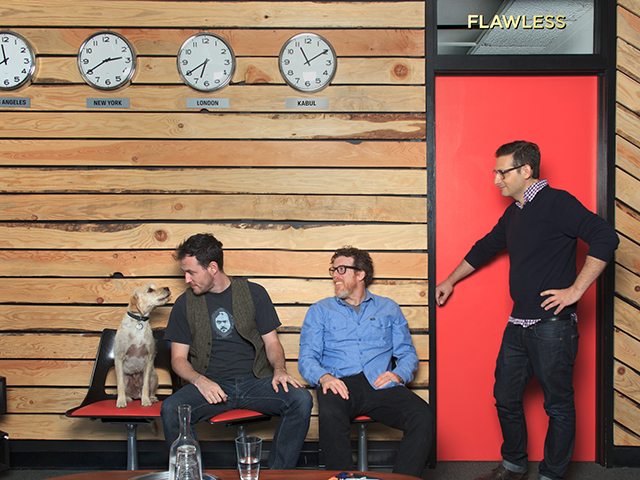 While there may still be some barriers to break down between the production and post teams, Flawless is making a name for itself amongst the stars. After all, who wouldn’t want to work with a company whose main focus is to make one look impeccable? When it comes to creating a consistent look and brand, many artists see Flawless as their go-to place for beauty work, thanks, in part, to mocha. According to Shur, he was blown away when he was first introduced to the software, saying, “At that time, there were certain jobs that I simply could not do because there might not be anything I could track to.”

Luckily for Flawless FX and the many artists they work with, these obstacles are now as easily removed as an unwanted rig in a shot. With mocha, Shur and his team can focus on creating beautiful, natural and consistent looks throughout a music video or commercial, producing truly stunning work.

“mocha lets me not have to worry about whether or not something will track,” Shur tells us. “This is a big thing. Instead of worrying about tracking, we can focus more on making our work look natural and well, Flawless.”