VFX supervisor, Tim Burke and producer Emma Norton first approached Baseblack in early 2009 to ask if they’d be interested in working on Harry Potter and the Deathly Hallows, the two–part epic finale to the most successful franchise in cinema history. Baseblack had worked on several previous films in the Harry Potter series. This time, Tim and Emma were thinking about using a flexible boutique; one that could be deployed throughout the film to clean up various sequences, while larger vendors would be used to focus on the major set pieces.

Inspired by the scope and variety of shots being offered, Stephen Elson of Baseblack assembled a new team to tackle the challenge, lead by VFX supervisor, Matt Twyford and VFX producer, Kate Philips and supported by mocha artists, Stephanie Kelly and Paul Chapman. And this team would go on to contribute more shots than any other vender participating in the Deathly Hallows Part 1.

Imagineer Systems sat down with Stephanie and Paul to talk to them about the challenges they faced in this high stakes, and highly visible project, and how they overcame them to deliver one of the most visually stunning, anticipated movies of the year.

It was these attributes that made mocha such a natural fit for Baseblack as they attempted to tackle one of the most highly anticipated films this year.

“When we sit down to begin new shots, you start to explore ways of solving the technical problems. One constant task is tracking; nearly every visual effects shot has some level of match–moving. Having mocha in your toolkit helps simplify the guesswork and allows the compositing artists to get right to the creative.”

Stephanie and Paul talked about some specific shots in which mocha not only shined, but saved the day! Paul talked about a specific instance, in which Harry is reading The Daily Prophet; loaded with inset moving images; wheremocha was vital in helping deliver the final product:

“We were all first introduced to The Daily Prophet in the very first Harry Potter film – it’s a staple in the film. The brief on this sequence was pretty straightforward; make it look exactly like they did in the last 6 movies!” 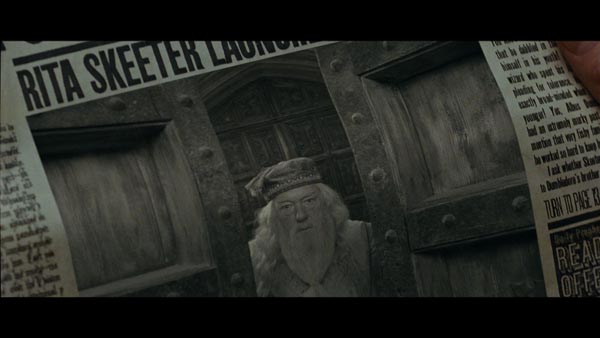 However, none of the artists on the team at Baseblack had done a Daily Prophet shot before.

“It was clear early on that our comp packages weren’t handling the tracking very well. In order to pull these shots off, we needed clean 4–point tracks. Instead of stitching single and 2–point tracks together, we setup one of the shots in mocha to see if we’d get a better result. We did. The planar tracker in mocha made quick work of what would have otherwise been arduous hand–tracks.”

In another poignant scene in the film, Hermione Granger, Harry’s best friend, is looking at a series of picture frames of her family. In the scene, she’s attempting to wipe her parents memories away with her magic. In each of the photos, Hermione’s image dissolves out of the picture.

“This was all done with mocha,” added Stephanie. “This was another perfect example, where you think you have a basic, simple shot with a simple effect – Hermione fading out of a picture – but it could’ve been a real nightmare. Each photo is moving, the camera is moving, the perspectives are changing – there was so much motion in this shot, that without mocha, it would’ve been impossible. So here was another example where we could focus on the creative, focus on moving the story along without the distraction of how we would make it work. And all we had to do, using mocha, was treat each photo as individual planes, and mocha did the rest. With all movement in the scene and the camera movement, mocha just figured it out. We had another perfect shot!”

“It was a real luxury working on this film, knowing that tracking would never be an issue. Even when it came down to integration with our other systems in house. The ease of integration with Nuke was fantastic. We could have both Nuke and mocha running simultaneously, side by side. Once we nailed down a track, we simply exported the corner pin data into Nuke, and it would appear as native in Nuke. We didn’t even have to close the app; we just toggled back and forth!”

“We often run quick mattes inside mocha. We could so quickly and easily export those into Nuke – it really made our lives easy. We took every opportunity to take advantage of the super easy integration with Nuke to simplify our workflow, they’re so complementary!”

“Harry Potter and the Deathly Hallows was an incredibly important project for Baseblack, and mocha made it happen! **mocha **is a tool in our arsenal now that gets picked up regularly throughout the shop. It’s reliable, it never crashes, it’s fast, and provides massively easy integration with our other systems. It’s just so reliable, you develop a comfort factor – you just know tracks are going to work. We had a lot of fun working on this film, it presented a wide variety of shots and some unique challenges. Having the right tools to get the shots completed was very important. After proving itself on Deathly Hallows Part 1, mocha has become part of our compositing pipeline.”