In our daily online travels, the Imagineer staff meet artists from all over the world using on mocha on creative projects. These artists are working on literately everything: high-end feature films, broadcast TV shows, even wedding videos and everything in-between. Recently we talked to filmmaker Jeff Desom, whose innovative short films and installation work showcases a wonderful combination of visual effects know-how and artful process.  Jeff shared some thoughts on his work and how he has incorporated mocha as a creative tool in his process.

“I’m a freelance director, writer and visual artist. I work between Los Angeles and my native Luxembourg. Very early on I realized how VFX could truly elevate my personal projects and how important it was to continually develop these skills, especially when faced with budgetary restraints. While VFX play a very important part in my work, I never specialized on the post-production side of things exclusively.

Most of my short films and music videos are life-action with the exception of Morgenrot. This project was entirely animated from old postcards and vintage photographs.”

“Last year, I directed my first commercial on a more substantial budget which allowed me to outsource VFX for the first time.”

“In recent years I have alternated between directing life-action and creating experimental video projects. Ever since my reworking of Alfred Hitchock’s Rear Window,  I’ve been getting more and more commissions from the art world. Having my work displayed in museums and galleries is nothing I ever planned for, but I’ve encountered a great openness towards new ideas that don’t fit into my life-action line of work. By the way, I didn’t even know mocha existed when I made the Rear Window project. I stabilized everything using only After Effects’ built-in tracker. In hindsight, I realize just how much time I could have saved if someone had told me about mocha!

(An interactive piece of the Rear Window installation is currently on display at the Museum of the Moving Image in New York.

“Holorama was an idea that I came up with in response to a commission from the Luxembourg Film Festival. I had experimented with the analog Pepper’s Ghost illusion before. Mixing this century old trick with new technologies created some very interesting results. With Holorama I continued to explore merging the old and the new.

I’ve always been very interested in our spacial awareness of films and how our brains construct a 3-dimensional space from what is essentially a 2D image. Something that computers are still struggling with. My challenge for Holorama was to extract information from a 2D image and turn it into a tangible thing. I used iconic films because these are spaces that exist in our collective memory but nowhere else. Through a very elaborate process, my model maker Oli Pesch and I were able to materialize these fictional places and bring them into the real world.” 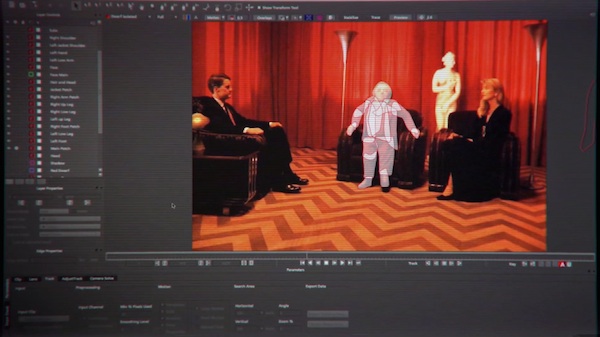 “I use mocha to track just about anything. After Effects is a great software but when it comes to tracking and creating feathered masks, nothing beats mocha. On set it gives me great confidence to know what can be achieved in post-production. For instance, if there’s a street sign that bothers me on the day of shooting, I don’t waste precious time getting the art department to dismount it. I know that this is something I can fix with mocha and After Effects within minutes and I can focus on what’s essential.”

“Besides the obvious technical advantages, mocha has a very soothing effect on me personally. Once I’m in the zone, I can rotoscope for hours on end. Despite appearances, it’s actually very easy to use and my mind is free to generate new ideas.”

“For Where Cinema Live On, I used mocha on just about every shot. Next to very obvious alterations like sky replacements, I’ve really gone out of my way to track and create shapes so I could basically re-light every corner of the building. I know you can achieve quite a bit with grading but with mocha I was able to dissect the various planes (foreground, mid-ground, background). I would add layers of haze, pronounce shadows, add beams of light etc. These are small things, but they make all the difference when it comes to creating an atmosphere.”

“I also noticed that mocha is very powerful when dealing with lens distortion. I didn’t shoot any distortion grids but inevitably some elements, like the sky, needed to warp along one edge of the frame. I used Mochaimport+ to stabilize that specific corner in a pre-comp. I would then do all my compositing for that corner inside the pre-comp and let mocha’s corner pin data do all the warping for me.”