As Restoration Producer for Cinerama, Inc., David Strohmaier is responsible for restoration of original Cinerama films - the first truly widescreen presentations of movies. Cinerama is the trademarked name for a widescreen process which works by simultaneously projecting images from three synchronized 35 mm projectors onto a huge, deeply-curved screen, subtending 146° of arc. It is also the trademarked name for Cinerama, Inc., the corporation which was formed to market the process. 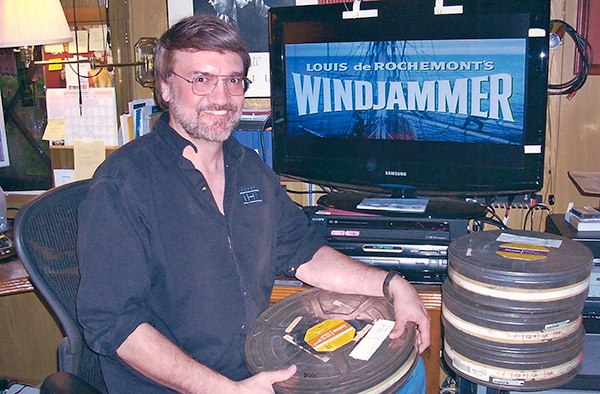 Cinerama was the first of a number of novel processes introduced during the 1950s, when the movie industry was reacting to competition from television. Cinerama was presented to the public as a theatrical event, with reserved seating and printed programs, and audience members often dressed in best attire for the evening.

Much of the original negative material was poorly stored, often in warehouses and vaults that were not temperature or humidity controlled. David inspects the reels by hand and often finds that they are faded and damaged. The films are then sent off for scanning on a Scanmaster 4000 at Image Trends in Austin, Texas. At Image Trends, as the scanning is happening, a special process called “Digital Ice” is applied to remove the surface dirt from each frame. The scans for each portion of the triptych are composited as one complete widescreen image and the files are then turned over to Philip Hodgetts, the project’s post production consultant. Philip converts the files to a 2K QuickTime for Final Cut Pro. David then reconstructs the film, supervising final clean up and color work as well as the syncing of the 7 channel 26 fps soundtrack.

David has found that some of the individual panels have a flicker between them - a result of the way old negatives fade over the years. In the past, David manually corrected the flickers which entailed hours of painstaking keyframing. It was after doing three such restorations that David discovered Boris Continuum Complete’s Flicker Fixer. He downloaded the trial version and gave it a try in Adobe After Effects.

“I was very much surprised by the results,” David commented. “BCC Flicker Fixer was quite fast and did more than just cure the flicker. The filter also succeeded in removing the emulsion blotching that occurred due to the age of the film - as well as the artifacting in the scanned negative.”

"By setting the Temporal Smoothing value to 1, BCC Flicker Fixer removed all of the flicker as well as the emulsion blotching that appeared in different panels of the three way scan,” continued David. “The process was so successful that I have gone back into two productions that were finished and applied BCC Flicker Fixer to several previously un-fixable shots.”

David also noted, “Another benefit of BCC Flicker Fixer is that it appears to have removed perceived image weaving that was a result of the poor negative. Before using the filter, I had never been able to fix this weaving.”