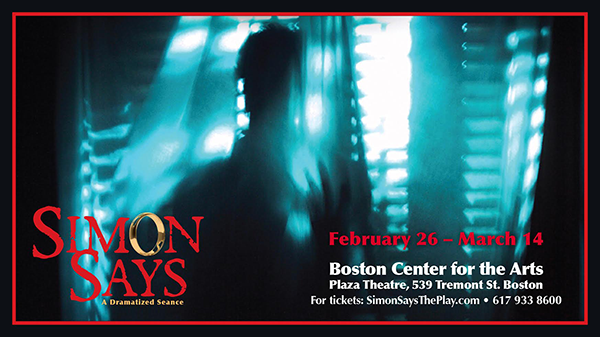 We’re always happy to help out the local arts scene in our hometown of Boston. Recently, Paul Ezzy, Boris TV trainer and QA, was approached by Director Myriam Cyr to produce a series visual effects for the play “ Simon Says ” currently running at the Boston Center for the Arts (Feb 26-March 14th).

The play, “a dramatized seance,” follows a young psychic channeling “Simon,” an all-knowing being, in an effort to scientifically prove the existence of the soul after death. Although Cyr had already incorporated live video projection into the play, she wanted to add a little something extra – visual effects – and Paul was excited to help!

In order to match the art of live theater with post-production vfx, Paul asked the director to film her actors over green screen doing the actions they would performing in the play. He then removed the green screen so the effects he added on top of the actors could be projected on a live stage.

Every shot used BCC Chroma Key Studio to remove the green screen. Once that was done, the fun started. “I relied heavily on particle effects,” says Paul. “BCC Particle Array and Particle Emitter were used in almost every effect.” He also used a lot of light ray effects, including BCC Rays Ring, Rays Cartoon, Rays Ripply, and Rays Puffy. “BCC Turbulence was vital,” continues Paul. “It allowed normal footage to become distorted as if it were on fire.”

The nature of the work demanded a lot of back and forth as effects that look great on a computer screen wouldn’t necessarily translate onto a projected screen. Simpler effects often proved more effective to the storytelling. “I even had to completely disregard footage of some of the actors and go more abstract – replacing the “ghost” character with a floating orb (think Glinda the Good Witch from The Wizard of Oz ),” adds Paul.

“It’s been an exciting process to take something pre-rendered and project it live on-stage. It gives the effects a sort of spontaneity that they wouldn’t have had on screen,” notes Paul.  “I love opening the world of theater to the art of visual effects!”

Here’s a quick trailer that Paul also put together for the play.